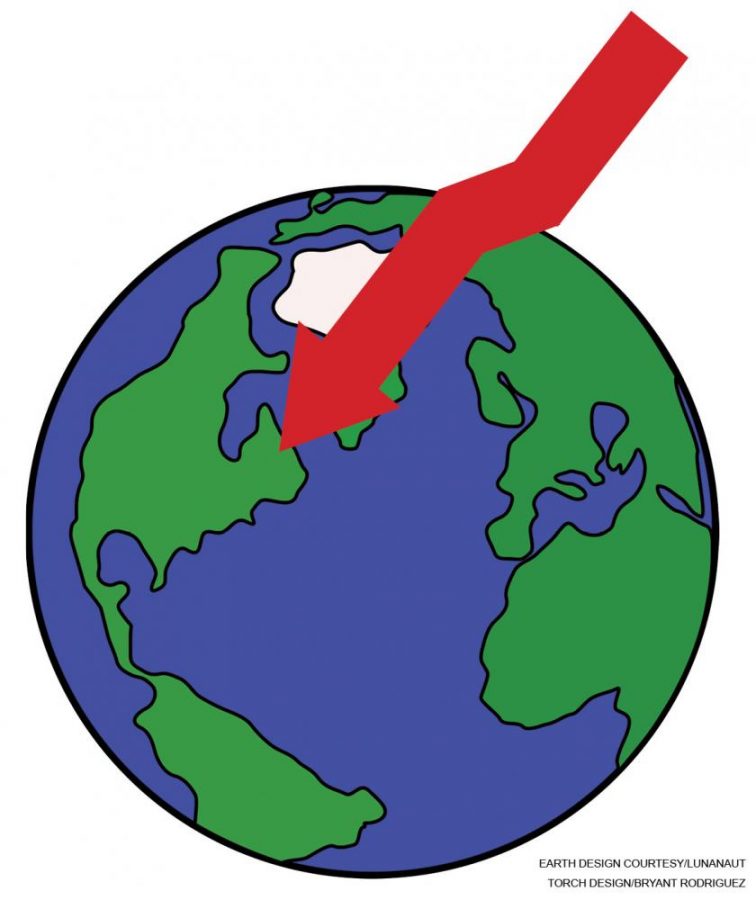 Undergraduate international student enrollment dropped significantly for the fall 2017 semester after years of a steady rise, but the University says it’s working to change that.

The university said there were 114 first-year international students enrolled this fall, down 70 compared to last year’s incoming class — a 38-percent decline. The school said the number of applications from international students also declined for the second straight year to 2,275, down 23 percent from 2015.

Other notable changes from first-year international enrollment include: 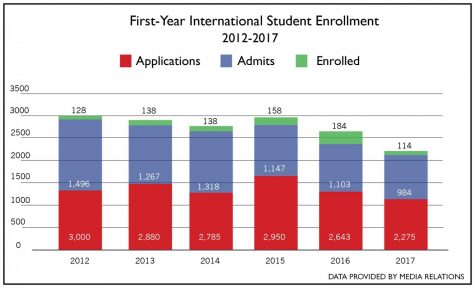 The numbers come from a six-year look at international first-year student enrollment, admittance and application figures provided to The Torch from Media Relations.

In a statement, Vice Provost and Chief Enrollment Officer Jorge Rodriguez said the university took “immediate” steps to reverse the stark downward turn in international enrollment — from 184 to a six-year low of 114 — once it was noticed.

“When this decrease was initially identified and predicted, we took immediate steps to regain market share,” Rodriguez said. “St. John’s increased its recruitment efforts around the world by hiring additional recruiters and enhancing site visits.”

Rodriguez said international student enrollment had been on the rise until this year’s drop.

“We cannot speculate as to why the drop in enrollment occurred,” he said, “other than to see the market changes and understand that the political climate potentially had an impact.”

According to the university, here’s the number of first-year international students who enrolled for the past six years: 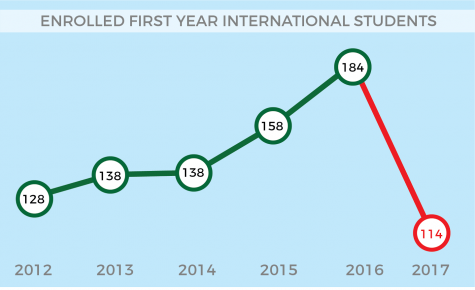 However, while the drop may seem stark, St. John’s is not the only school in New York City to experience a decline in international enrollment.

According to the New York University Factbook, the number of first-year international students enrolled dropped this year to 392, down from 400 in 2016. Similarly to St. John’s, this is the first time in years NYU has experienced a drop in recent years, even if it is a slight one. According to the NYU website, it has the largest number of international students in America.

Fordham, Pace and Columbia have not yet publicly published their factbooks. None of those schools had previously experienced a decline in international student enrollment, according to their 2016 factbooks.

The most recent factbook available for St. John’s on its website is from 2015.

International students from three different countries spoke with the Torch and cited three reasons they believe are responsible for this year’s decline in enrollment:

The charged political climate in the United States.
The significant cost of attending college here
The often complicated process of obtaining a visa.

Kayla Virgil-Darrell, a junior from Bermuda, believes the tenor of Donald Trump’s presidency toward non-residents could be a reason for the sudden change in enrollment numbers.

“I definitely think that Trump and his administration has had a huge influence on individuals from other countries deciding to come to the United States to study,” Virgil-Darrell said. “People don’t want to leave their family to move to a country whose president doesn’t want them there.”

In January of 2017, President Trump issued an Executive Order on Immigration which temporarily suspended the issuance of visas and placed a ban on entry into the U.S. by citizens of Iran, Iraq, Libya, Somalia, Sudan, Syria and Yemen. Students here responded by expressing their opposition with protests, marches and petitions.

President Conrado “Bobby” Gempesaw said in a University-wide statement at the time, “As a Catholic and Vincentian University with a 147-year history, St. John’s has—and will always be—a place that welcomes immigrants and the children of immigrants…We support all members of the University community, regardless of their country of origin or their chosen faith. We are committed to continuing this tradition.”

Junior Daniel Haynes, who comes to St. John’s from Guyana, said, “Studying in the U.S. is expensive, especially when you don’t have any family in the U.S. Added to the fact that the political climate in the U.S. is what it is.”

In some cases, if students want to gain a bachelor’s degree they have no choice but to leave their home country.

“Bermuda only has one college [Bermuda College] where the highest degree you can get is an associate’s degree. This is why most students travel outside of Bermuda to pursue further education,” Virgil-Darrell said.

Camilla Biscarini, a graduate student who was also once an undergraduate student at St. John’s from Italy, thinks money could be a concern, at least for Italian students. She explained that in Italy, and some other European countries as well, college tuition comes at nearly no cost.

“Italy’s tuition for college is way cheaper and almost for free. I could have gone to one of the biggest universities in Rome called Sapienza [Università di Roma] for not too much money,” Biscarini said.

Biscarini explained that tuition for Sapienza is not fixed and is determined based on the financial situation of the student and student’s family. She said her sister pays less than €2,000 per year at Sapienza which converts to about $2,350.

She said she chose to still come to school in the U.S., and St. John’s specifically, because of the pride that comes with an American diploma, on top of her love for New York City.

“I’d love not to have loans when I get out of college but there will be the issue of loans,” Biscarini added.

She then mentioned the hassle that comes with obtaining an American visa for study.

“It’s a complicated process especially when it comes to a student visa,” she said. “Once you apply and are approved it means you’ll be able to keep it forever, but there are always requirements.”

Haynes, the student who comes from Guyana, added that there’s a lot of steps — and stress — that comes with obtaining a visa before coming to school here.

“It is a bit difficult to obtain a student visa,” he said. “First of all you must be able to prove you can sustain yourself in the U.S. in order to get an I-20. If you can’t there goes your hopes of studying. However, let’s say that you get past that stage and get your I-20. The next step is the interview at the U.S. embassy and if that does not go well despite having an I-20 you could be denied your visa.”

Getting a visa from Bermuda however wasn’t as difficult for Virgil-Darrell as she said the U.S. has very strong ties with its island neighbor.

And this trend doesn’t appear to be going away.

According to a March story published by Inside Higher Ed, a digital industry publication, nearly 40 percent of the more than 250 schools nationwide surveyed reported experiencing declines in applications from international students.