Take Back the Night ‘SOARs’ Through SJU 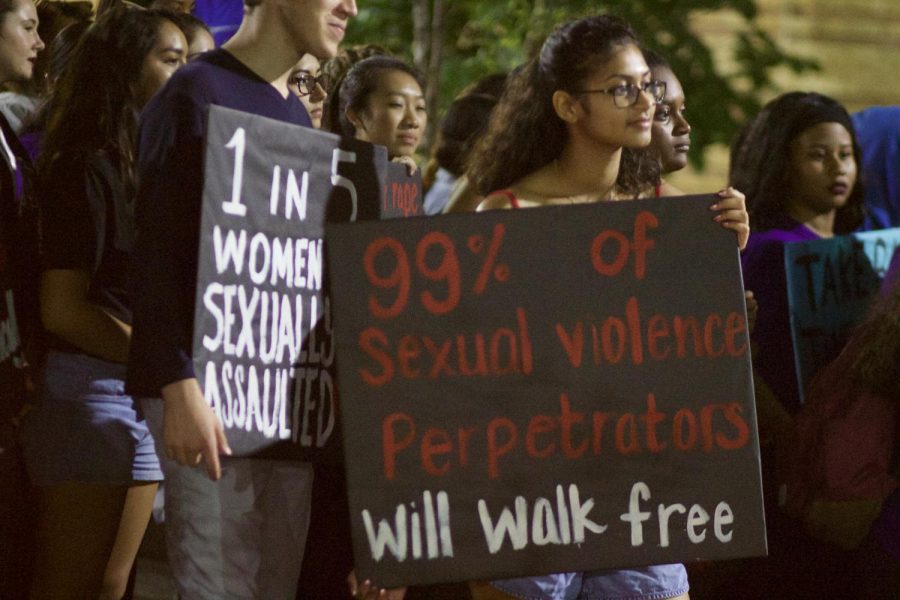 Students walked through campus in solidarity with victims of sexual violence.

“Take Back the Night,” an event meant to promote awareness for sexual assault prevention, was held Tuesday, Oct. 10 by the St. John’s office of Sexual Violence Outreach Awareness and Response (SOAR). As part of the event, students gathered at Donovan Hall and began a silent walk to the D’Angelo Center in the spirit of solidarity with victims of sexual violence.

In addition, a set of performances were presented, beginning with a choir expressing a message of solidarity. It was followed by a silent dance routine performed by the Step Ya Game Up step team, emphasizing the emotions of the aftermath of sexual assault and the subsequent silencing of it. The feelings of tragedy from sexual assault was demonstrated through a rendition of Lady Gaga’s “Til It Happens to You.”

Betsy Rose Green, a representative of Womankind, a nonprofit serving victims of domestic and sexual violence, discussed accountability at the event.

“Not only believing survivors but speaking up for those that can’t and giving courage to people that need it,” she said, mentioning that she believes it is important to keep an open mind that anyone can be a victim or a perpetrator and reminding the audience of affirmative consent.

Recent federal changes regarding the rights of those accused of sexual assault on college campuses enacted by U.S. Education Secretary Betsy DeVos bothered Matthew Sulewski, a member of Take Back the Night’s planning committee.

“I don’t think the accused should be so entitled. Why should they be given more rights? The accused try to put themselves in the light where they are the victim. They should be help more culpable for their actions,” he said. “I’ve been a part of Take Back the Night since freshman year and stand against rape. I want to empower bystanders and victims to take action with others and make sure that people feel safe.”

Student Cristina Villon said, “Latinx typically don’t report out of fear of being deported or attacked by their current partner. They do not speak about because they fear they will not be believed,” she said.

“The media sexualizes Latin woman and makes people believe that Latinx women are asking for it,” Jennifer Bruh, a student, said.

When asked about what her response would be to men’s rights groups who may believe they are being attacked, Hurtado said she would tell them, “I see the need for your protection but understand it is a serious topic. We understand that there are some women that will lie because they want revenge or are upset.”

Delta Phi Epsilon encouraged students to remain bold with their statements and open with their complaints.

Student Alexandra Kvapil commented on the current political climate regarding accusations the Trump administration is contributing to “rape culture.”

“Delta Phi Epsilon is here to raise awareness for sexual assault and show support for those affected. It’s disgusting to see how some officials are talking about sexual assault,” she said. “I don’t believe that Trump respects women and that his comments are disgusting.”