NAACP Opens Discussion on the “School to Prison Pipeline” 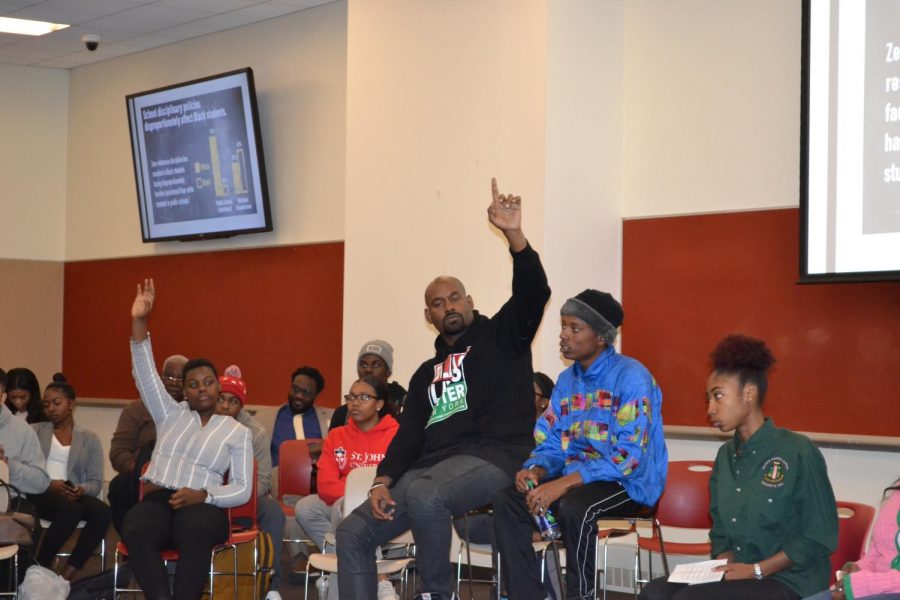 Students and local community members participate in discussion at the event.

Around 40 people from St. John’s and the surrounding community crowded into the D’Angelo Center Organization Lounge last Tuesday, Oct. 17 to hear panelists and audience members discuss the “school-to-prison pipeline” with a focus on the black community.

The discussion was moderated by editorial board members of the NAACP; they prompted the discussion with questions, facts, graphics and videos; such as a video from AJ+ named “The school-to-prison pipeline, explained,” which showed Deputy Ben Fields wrapping his arm around a Black female student and flipping her to get her out of her desk. They started by simply asking, “what is the school-to-prison pipeline?”

“It’s a process in which schools are underfunded, especially in communities of color,” Atem Tazi, junior Health and Human Services major, said, on what the school-to-prison pipeline is. “People don’t know the things we’re forced to do that hurt our communities.” Swygert emphasized the “prison industrial complex” where marginalized people are used as “cheap labor” which caused the school-to-prison pipeline.

Ryder, who also works with Rikers Island, brought up that “it’s about what happens in schools,” trying to address the policies and practices inside of education that lead to harsher punishments for certain students in certain areas. She gave the example of metal detectors in schools. Newsome brought up his own personal experience where many teachers “were not from our communities” and that they were “the worst drunks, who couldn’t get jobs.”

Bryanna Buchanan, a junior and sister in Alpha Kappa Alpha, followed up stating that “people who can’t teach shouldn’t teach,” making it clear that she believes teachers have a responsibility.

The conversation continued on more organically following suit with prompts and information coming up periodically from the moderators. The discussion became more about what the black community needs to do or what needs to change in the education system rather than the roots of the pipeline or oppression.

Morgan Bell, president of the St. John’s chapter of NAACP, supported the conversation being more prescriptive rather than analytical to create change when she said, “We’re supposed to promote social, economic, educational and political equality, and mass incarceration, of course, is a huge issue that affects minorities, which is what the NAACP focuses on.”

Mirlaine Ocean, a senior at Queens College who came because she saw a flyer for it, said, “I think it’s more about setting the example.” Shelton argued that it’s “important that we don’t create black success stories but black success,” and he highlighted that people need to “battle institutions” because “even if we [the Black community] graduate or get out of schools, society is still racist.”

“They’ll treat you like a criminal, so you become one,” Oster Bryan, president of St. Albans Civic and Community First, said, supporting Shelton. Moreover, Newsome was quick to say that we should “get back to restorative justice,” and not be “so quick to punish our kids” in order to provide somewhat of a solution.

Swygert summed up the conversation saying, “It’s our right to educate and protect our children and not exploit them.”

The event ended with Newsome urging people to not “let these last three hours go to waste,” while Bell said that she was accepted into Teach for America that very day and espoused responsibility as a teacher and person trying to create change. Many attendees also agreed to create the change they wanted to see in the system with that.