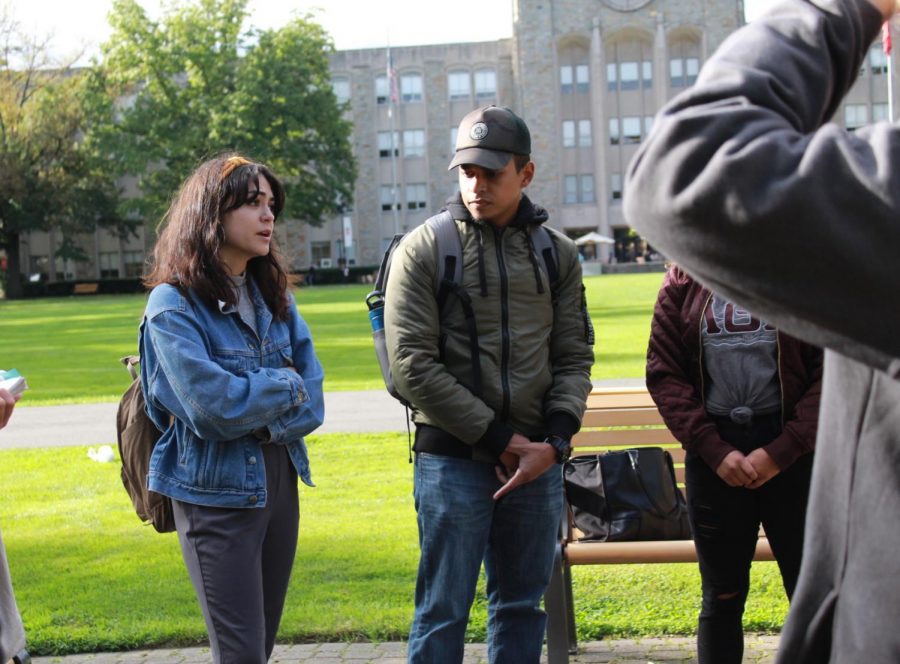 The protest began with students voicing their concerns over the repeal.

Social Justice Exchange (SJE) held a march on campus in protest of the DACA (Deferred Action for Childhood Arrivals) repeal on Monday, Oct. 16, which began in front of the Celtic cross monument on the Great Lawn.

The repeal, referred to as a “wind-down” by Attorney General Jeff Sessions, was announced by the Trump administration early last month and effectively ended the program that provided work authorization and deportation relief for undocumented people who were brought into the U.S. as children.

The event initially drew about 15 participants including students, alumni and faculty. Several stayed for the march which led to the D’Angelo Center, and then circled back around campus to the Celtic cross monument where a discussion was held about the ramifications of the repeal, as well as the state of student activism on campus.

Because the march took place outside of common hour, participants were encouraged to speak among themselves but refrain from yelling or shouting, so as not to disturb ongoing classes. According to LJ Vogel, head of the Social Justice Exchange, the march was scheduled to prevent infringing on the “DACA for Dummies” workshop which took place earlier that same day in the D’Angelo Center.

“We don’t, as students at this University in particular, know what goes down out there. We often don’t talk about the people here who might be undocumented, the students on this campus who benefit from the DREAM Act,” Vogel, a senior, said, referring to the Development, Relief and Education for Alien Minors Act, a piece of unpassed legislation concerning issues which DACA addressed. “I think that it’s really important that we start to have conversations about how this is affecting us as a community.”

Vogel, who moderated the discussion, posed a series of questions for attendees such as their perception of the University’s response to the DACA repeal and the far-reaching effects of the repeal itself.

Those in attendance agreed that the University’s response, which included a statement addressed to the University community from President Conrado “Bobby” Gempesaw and information about legal aid from the Office of Multicultural Affairs, should have been sooner.
They also agreed that students need to take a more active role in what goes on within their school.

Chelsea Marrero, an SJU alumna and current president of the Beta Alpha chapter of Omega Phi Beta Sorority Inc., said that she attended to help unify student organizations to form a cohesive movement.

“We’ve been in contact with Social Justice Exchange because we wanted to try and bridge a gap between student activism and faculty, and what’s going on in the world and try to bring it to campus,” Marrero said.

Melissa Lozano, a senior and the treasurer of LASO, the Latin American Student Organization, said that she came to the march from hosting “DACA for Dummies,” and wanted to attend in solidarity for those affected as well as to listen and participate in the conversation.

“I think it’s important to enlighten students about DACA, because a lot of people don’t really know what it’s about or how to move forward from the repeal,” Lozano said.

The march is the first in a series of events hosted by SJE called “Student Week of Power,” which aimed to encourage student participation in conversations regarding University-wide issues. Other topics included police brutality, the new travel ban and LGBT solidarity; they did not have a substantial turnout from the student body in their later events.