An In-Depth Look at the New Solar Tables 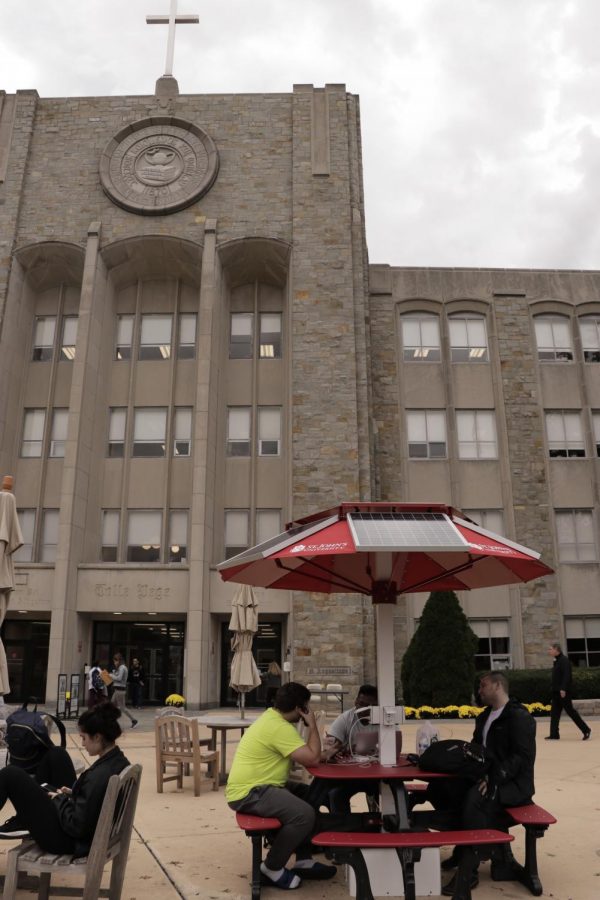 The solar tables can be found outside of DAC, Marillac and St. Augustine Halls.

If you ever wanted to charge your phone and laptop while enjoying the weather outside, you don’t need to be wired to an outlet. Now you can work off the power of the sun with the new solar powered tables on campus.

Yet, Thomas Goldsmith, the director of Environmental and Energy Conservation Office, told the Torch they’re more than just a neat feature to the University.

According to Goldsmith, each table that was purchased from EnerFusion, Inc. cost $12,000 and was paid in full by the University. This, he says, is a necessary investment due to the benefits that the tables provide to St. John’s in terms of its energy base load.

“It lowered our base load because if you weren’t charging your phone at the table, where would you be charging it? In a building, and I have to supply you with electricity,” Goldsmith said. “I can’t put in an energy conservation measure to lower that phone usage, but I could put a solar table in where you can charge it outside.”

In an attempt to continue the University’s efforts to become increasingly energy efficient, it enrolled in New York State’s Reforming the Energy Vision (REV) Campus Challenge two years ago. The challenge is meant to assist colleges and universities develop a roadmap for energy conservation.

St. John’s received 75 percent — which comes out to $150,000 maximum — with a $3,000 allowance for a St. John’s student to be an intern to fund the auditing. From this auditing, an Energy Master Plan was developed.

“It’s quite normal for higher education but it’s not good as far as where we could be,” Goldsmith said. “Once we get to 135 KBTU per square foot, I’ll be happy to buy all the solar panels I could buy.”

Carissa Herb, the president of Earth Club, worked closely with Goldsmith in order to expose the St. John’s community to solar energy. She has been an advocate for solar panel installation for two years now.

“I feel that these tables will be conversation starters and catalysts to inspire students to learn more,” Herb said. “For now we are going to try and reduce the energy waste on campus.”

She added that in order to improve this process, “Everyone can do their part by turning off their lights when they don’t need them or relying on natural lighting rather than and actual light bulb.”

Earth Club’s Vice President Megan Barry believes that, although it’s getting colder outside, “The tables will definitely be put to good use since people can charge their laptops and phones, especially in the spring.”

Similarly, student Daniel Sanchez tried out the table in Marillac Terrace and was impressed by the wireless phone charging feature.

“It has a wireless charger, which I think is really cool, and [it started] charging my phone as soon as I put it on there,” Sanchez said. “If I wanted to stay here and just study or something while my phone was charging it’d be good.”