Race and Public Memory: Where Do You Fit In? 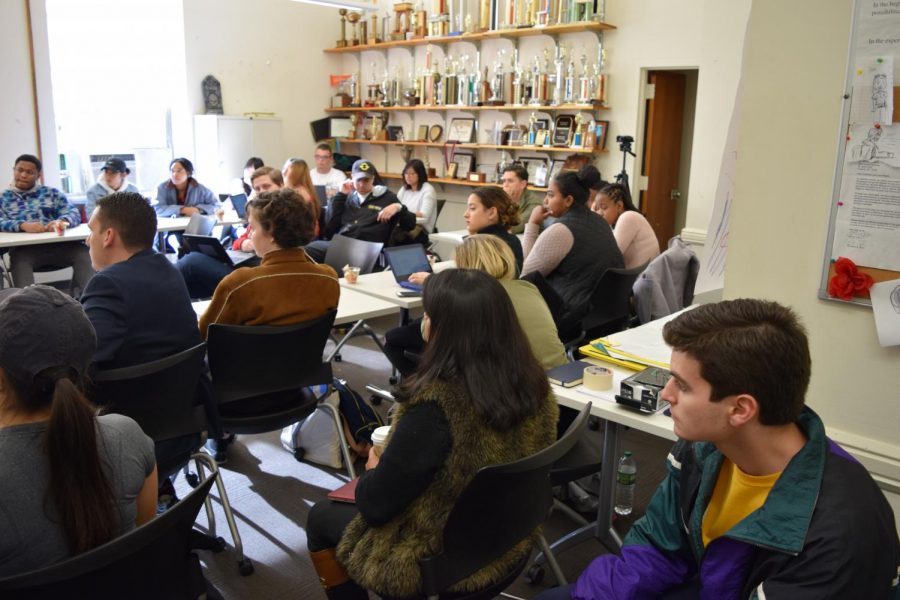 Panelists aimed to have students discuss topics that they said could be difficult to talk about.

The discussion, which lasted around one hour and 15 minutes, began with presentations by panelists Dr. Jaime Wright, Dr. Gina Castle Bell, Yves Nguyen and Mikayla Torres, and concluded in an audience question-and-answer session over pizza. Each speaker brought a different narrative to the table, and students intently listened as each panelist spoke on issues that are at the forefront of society today.

“We wanted to create a space where we could talk about difficult issues in a place where people could ask questions and hopefully grow by reflecting on race and memory,” Bell said.

Bell opened the discussion with a presentation on protest and racial discourse within our nation. Wright then brought forth the topic of whiteness and collective memory.

“This dialogue needs to continue to happen,” senior Kenneth Shelton said. “The panelists or any of us [don’t] have one specific answer [to the topics presented]…I think it stresses the need for these conversations to happen.”

The conversation then shifted with Nguyen, who focused on the seemingly false, stereotypical narratives rampant within American society. Torres, the last panelist to speak, concluded the presentation portion of the event by discussing the embedment of violence into American history.

As student panelists, Nguyen and Torres brought a different kind of perspective to the table. This was well-received by student audience members, who had the chance to engage in what senior Justin Ramirez labeled as active listening.

“I think it’s something that people don’t often have the chance to do or even try to do,” Ramirez said on having the ability to hear the experiences of participants in the discussion.

For students like Shelton and Ramirez, Tuesday’s relatively short discussion did not seem to be an appropriate time limit to have on such a conversation. For the conversation to expand beyond the walls of Room 203 in St. John Hall Ramirez said, “There has to be a want to have these conversations because if there isn’t you’re not going to get through to more people.”

A proponent of student discussion, Bell said that students will have more opportunities come the spring to further voice their opinions and educate themselves on the topics discussed at the event.

“We are hoping that [these events] will generate a larger conversation and that it’s going to create a campus community that’s inclusive,” Bell said.

“If we truly care, we have to take this outside of the classroom and support people organizing this type of stuff,” Shelton said.