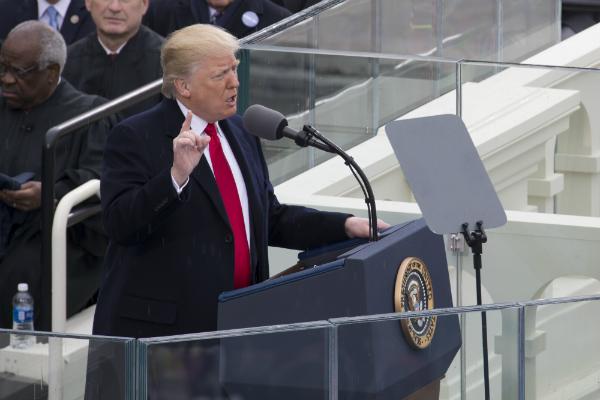 In the year since the election of President Donald Trump, students and staff within the St. John’s community were active in voicing their concerns, hopes and opinions policies he’s enacted.

Here are some of those most important moments the Torch documented since Nov. 8, 2016.

Nov. 15 — Following a spike in hate crimes and other controversies linked to then President-elect Trump, students marched along campus for what one student described as “trying times.” The event was put together by Spectrum, Feminists Unite, Students of Consciousness and the Latin American Student Organization, among other groups.

Nov. 16 — The Division of Student Affairs released a letter to the student body regarding services available to students following the presidential election. The letter, sent from Kathryn Hutchinson, the vice-president of Student Affairs, said, “We want to be sure that the strong feelings felt on both sides are not expressed through intolerance, intimidation, or discrimination—all of which are inconsistent with our University core values.”

Nov. 16 — Four suites in Century Hall hung pro-Trump flags that sparked controversy and backlash from the student body. The residents of the suites argued that they were demonstrating their right to freedom of speech. Other suites in Century later hung a “Love Trumps Hate” poster and a Barack Obama election poster.

Nov. 28 — 465 students signed a sanctuary petition for St. John’s to protect members of the community who could face deportation following Trump’s proposed immigration policies. In an effort to address concerns, the University sent out an email to students about its policies regarding the immigration status of students.

Jan. 21 — The day after Inauguration, dozens of St. John’s students participated in the New York City Women’s March. Protesters attended to promote women’s rights, immigration reform, climate science and healthcare reform, among other causes. It was the largest protest in U.S. history.

Jan. 30 — SJU President Bobby Gempesaw released a statement to students regarding the travel ban that temporarily suspended the issuance of visas and placed a ban on entry into the U.S. by citizens of Iran, Iraq, Libya, Somalia, Sudan, Syria and Yemen. He assured the SJU community, “As a Catholic and Vincentian University with a 147-year history, St. John’s has—and will always be—a place that welcomes immigrants and the children of immigrants.”

March Against the Ban

Feb. 6 — Students Morgan Popek, Katyi Leeman and Deja Leigh organized a march against the travel ban in protest of the executive order banning citizens from seven Muslim-majority countries from entering the U.S. The Torch later spoke with Muslim students about the order and the effect it has on them, and also made a documentary on the Muslim Student Association.

Sept. 6 — Following the Trump Administration’s announcement to repeal the Deferred Action for Childhood Arrivals program known as DACA, Gempesaw released a statement referring to his own status as an immigrant, and said he signed a statement last November “calling for the DACA program to be ‘upheld, continued and expanded.’” He said that the University will continue to monitor the status of the repeal to determine how best to “respond and support those impacted by the decision.”