The Pan-African Student Coalition group Haraya apologized this week for its initial response to a wave of criticism that it neglected its relationship with black students during its annual Black Solidarity Day (BSD) on Monday, Nov. 6.

Saying “it was not our intention to offend anyone,” Haraya walked back its initial statement posted on Twitter that some students say was not at all responsive to the students’ concerns about how panels were arranged that day.

Haraya’s apology, posted on social media Monday, came one week after the group’s choices of two non-black speakers for the BSD event drew the ire of students and raised questions over how Haraya identifies itself — is it a multicultural Pan-African Coalition or a Black Student Union?

“The events that occurred over the past couple days have been intense, yet helpful,” Alyssa Evans, the vice president of Haraya, told the Torch in a statement Tuesday. “Our purpose on campus is to advocate for students and be a voice for them; it is clear that we were not living up to their expectations.

“We have heard the concerns and thoughts from students and are working to make some progressive changes within Haraya.”

According to Encyclopedia Britannica, Pan-Africanism is the idea that people of African descent have common interests and should be united.  However, Haraya insisted in its initial statement that as a Pan-African Coalition, its interests are multicultural.

Haraya’s BSD event included discussions on the importance of black solidarity with guest speakers and held a solidarity march to end the day; the panels in general received the most attention from students on campus.

Among the panelists at BSD were Shaun King, writer and civil rights activist, along with Sam White, a white student in a black fraternity Kappa Alpha Psi at Villanova University.

That led to some St. John’s students to voice concerns, most notably on Twitter.

Imani Fox, a junior and co-leader of St. John’s Students of Consciousness (SOC) who was also a panelist for BSD, has an active presence on Twitter, which she uses as a platform to talk about activism outside of school. Following the panels, her tweets addressed what she viewed as the intent versus the impact of Haraya’s actions in choosing those panelists.

“Honestly, overall, I was disappointed in how everything went down and essentially was  planned on a day that was supposed to be about Black people for Black people.”

“I say all of this not to drag anyone but to hold Haraya accountable to their purpose for the Black people at SJU. Many people are not doing that. I am not the only one who feels this way, but I am not afraid to call people out. Haraya honestly needs to do better as a Black org.”

Students confirmed Fox’s tweets expressed what they were thinking.

Fox told the Torch she felt the need to speak out because, “I personally felt there were a lot of things done wrong and other people’s feelings weren’t put in consideration.”

Wyett Woodbury, a junior, felt that White was an inappropriate speaker for an event focused on black solidarity. Woodbury also was a panelist and spoke about his black experience and black diaspora because of said prominent social media profile. But he felt he was being spoken over by White, the Villanova white student on the panel.

“When I stated my piece and I said what I said, Sam White basically invalidated my entire experience,” Woodbury told The Torch. “He said that I was playing oppression Olympics and was making wide generalizations.

“Y’all invited me to a black panel to have a white person speak over me and say my experience as a black person is invalid. That was my major issue.”

Haraya said the panels “were meant for those with open minds,” but students felt it was insensitive to take place on BSD.

Kayla Tarver, a junior, said no matter how “woke” a white person is, they can’t relate to the black experience.

“They can sympathize and imagine but there’s no way you could literally change your skin color or the white privilege  you walk around with every day,” Tarver said.

Fox, who said she met privately with members of Haraya after her tweets sparked the wave of student criticism, believes that Haraya needs to decide what type of organization they want to be. Her issue is Haraya’s stated intention to be the Pan-African Student Coalition while many students look at them as the University’s Black Student Union.

“I wanted to express that because I knew no one was really going to confront Haraya in the same way,” Fox said. If Haraya chooses not to serve as the Black Student Union, Fox said she would consider putting one together.

Following Fox’s tweets, Haraya released its initial statement Nov. 7, a day after its BSD event. Haraya termed the criticism as an “attack” on its organization.

“Please stop attacking Haraya for any and everything that happens on this campus regarding Black people,” the statement read on its social media platforms. “It is ignorant…”

“These panels as well as other aspects of the day were meant for those with open minds. It was not only a space for Black people to share their anger but also a platform to spark conversation that is often hidden under the rug (besides 140/280) characters).”

Haraya also stated that BSD is a place for education, not just a space for the Black community.

Wilbert Turner, a junior, said the Haraya statement “addressed a lot of the critiques brought against Haraya after Black Solidarity Day, which is good. If critics don’t like the response they should work with the leadership of Haraya more closely, or they should work to put themselves in those leadership positions in the future.”

But Fox called the response “inappropriate and unprofessional” and added, “It was as if they didn’t read my thread and took it as a personal attack.”

Other students who spoke to the Torch said that after reading Haraya’s statement, they would like the group to clarify what they represent as an organization. 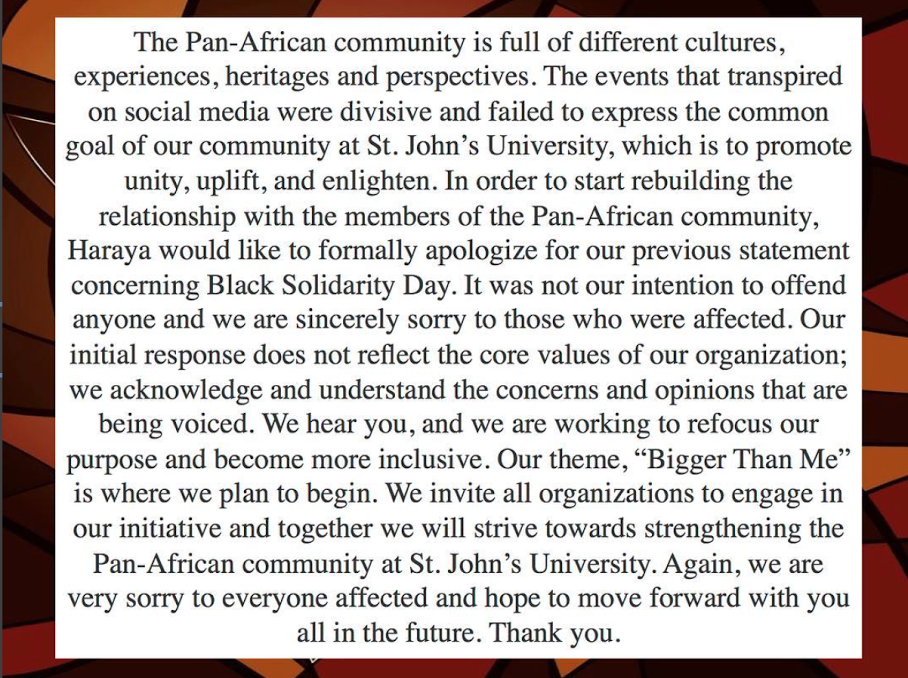 Haraya released a second statement on Nov. 13, apologizing to those who were offended by BSD on the Queens Campus.

In the new statement, Haraya said: “We are sincerely sorry to those who were affected. Our initial responses does not reflect the core values of our organization; we acknowledge and understand the concerns and opinions that are being voiced.”

Haraya said in the new statement that they are the umbrella organization for the Pan-African Student’s Council that strives to strengthen the Pan-African Community and promote “unity,” “uplift” and “enlighten” on the Queens campus.

Haraya also said it encouraged students to “continue voicing your opinions” and vowed to listen at a Cultural Town Hall scheduled for that night.

Although Haraya met with multiple organizations that fall under the Haraya umbrella — like the Caribbean Students Association (CSA), last Thursday in a private setting, according to Fox — a follow up town hall event was held Monday night for all students to voice their concerns involving all of the said controversy.

The main question at hand was, “How should cultural organizations engage students and move forward to uniting on campus?” according to the event flyer.

The discussion included what occurred on BSD, as well as teaming up with all cultural organizations and addressing the conversation about the non-black member of Haraya.

Kimberly Dorismond, a junior who attended, said, “Haraya was willing to take the criticisms and now we’re all trying to move forward. I think this is something that has to happen more often.”

Brianna Haynes, who also attended the town hall, described the tone as “hostile,” with a lot of students venting their frustration.

“We shouldn’t be so divided with so many cliques and to celebrate all of us together and how far we’ve come,” she added.

Several students told the Torch they took issue with a non-black student in a leadership position within Haraya — namely Sophia White, who is the co-chair of the Pan-African Women’s Committee.

White declined to comment for this story, but her co-chair, Obono Mba-Madja, said there are a lot of things that people don’t recognize going behind the scenes. “We’re not here for ourselves, we’re working for everyone,” she said.

Amenkha N. Sembenu, president of CSA, hopes Haraya will work more closely with other cultural organizations in the future.

Amel Viqud, a member of Haraya, said she is ready to put everything in the past.

“Personally I didn’t feel attacked, I listened to what everybody had to say…,” Viqud said after the event. “All of these organizations need to work as one and that’s what we’re doing. I just hope it can go further than this Marillac Terrace, you know go to the GBMS and the SJU feeds and the SGI meetings and get a hold of each other.”

Jillian Ortiz contributed to this story