“To Write Love On Her Arms” 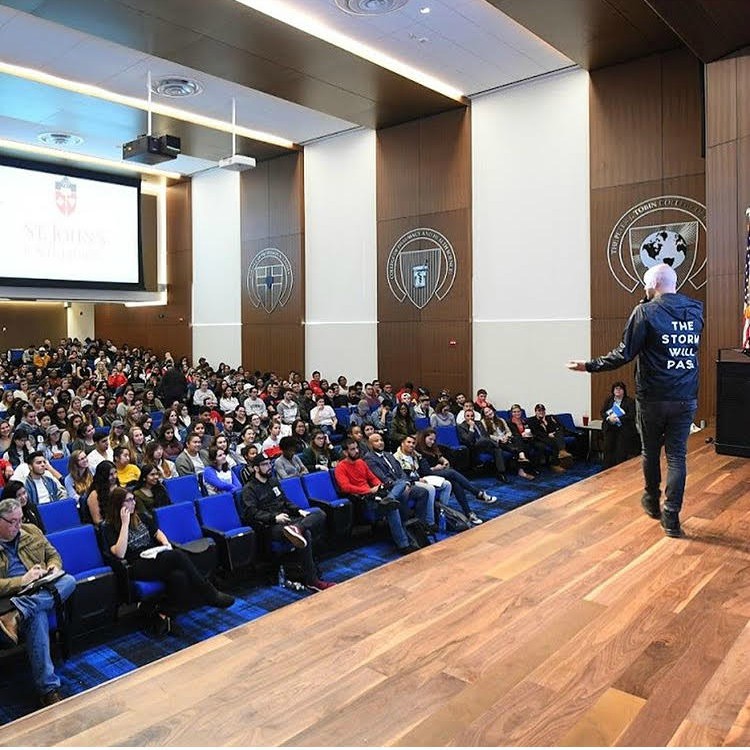 Tworkowski spoke on the founding of his nonprofit.

More than 600 students filled the Marillac Auditorium to hear Jamie Tworkowski talk about his foundation “To Write Love On Her Arms” last week. The event,  sponsored by The Division of Student Affairs, Student Government, Inc. and Student Veterans Association as part of  Veterans Week events at the University, also covered topics such as depression and suicide.

According to Tworkowski “To Write Love On Her Arms” is one of the largest nonprofit organizations online. Its mission is to inspire messages of hope, support, love and trust. There are 15 full-time staff members, a host of interns and thousands of supporters dedicated to helping people who suffer from depression, addiction, self-injury and suicidal tendencies.

“I heard that I might be the first mental health speaker to give a talk here in awhile, and that is so special to me,” Tworkowski said.

Tworkowski said he didn’t set out to start a nonprofit organization; all he wanted to do was help a friend and tell her story. When he met Renee Yohe, she was struggling with addiction, depression, self-injury and suicidal thoughts. He wrote about the five days he spent with her before she entered a treatment center and he sold t-shirts to help cover the cost.

When she entered treatment, he posted the story on MySpace to give it a platform. Soon Tworkowski and his friends were answering messages from people around the world.

“Today I met Jamie Tworkowski, my personal hero,” sophomore Gabrielle Ciminera said. I’ve loved this organization since I was 13-years-old.”

Two students shared their thoughts on why they think young adults suffer most from depression and how suicide could be the third leading cause of death among 18-24-year-olds.

“There’s so many expectations of us to succeed, when people don’t need to have everything together,” senior Mariah Montero said.

“There’s too much stress on our plates,” sophomore Chris Jillsol added.

According to the World Health Organization, 800,000 people commit suicide each year. Each day, 22 veterans commit suicide and over 20 million people suffer from depression.

After the talk, SJU Serves presented Tworkowski with some St. John’s gear and students had the opportunity to ask questions, take pictures and buy merchandise. Laughs, tears and positivity filled the hallway as students shared their stories.

“The best part of my job is meeting people who are still alive because of this organization,” Tworkowski said at the end of the event.