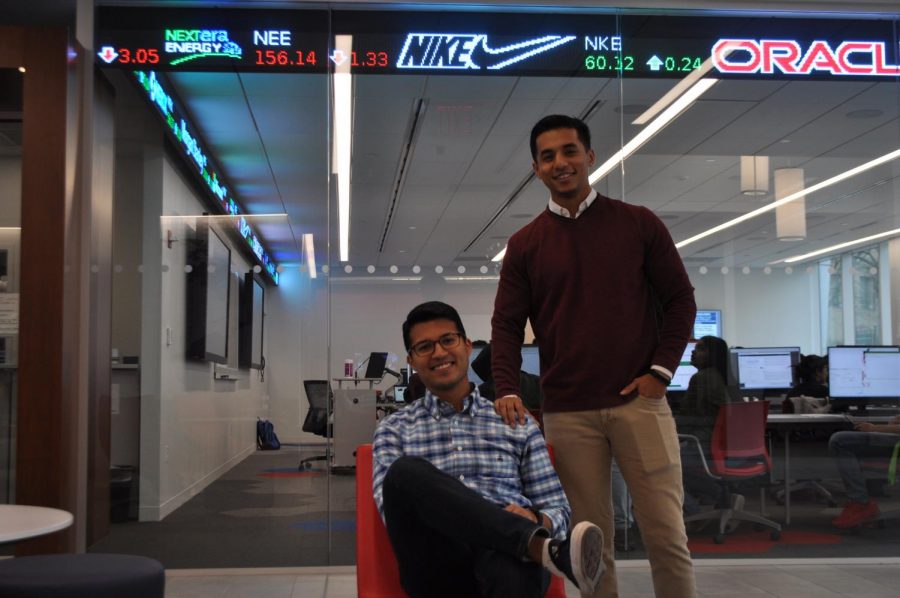 Despite offering several different meal plan options, one thing St. John’s doesn’t give students the option of with their plan is using swipes or points at off-campus restaurants. But now, two students are working to change that — for off-campus residents, anyway. Param Yonzon, a senior, and Milton Parra, a graduate student, have spent the last year developing an off-campus meal plan for students who don’t dorm at St. John’s that is unaffiliated with the University.

“I think it was one night where I was just so frustrated and I had just thought about the idea, you know, like, ‘Why isn’t there an off-campus meal plan at these local restaurants?’” Yonzon said.

“I basically had no time to grocery shop, I was really bad at budgeting, and it was just really hard for me to find food to eat, and so I always went to local restaurants like Regina’s and Double J’s,” Yonzon, a risk management student, said in a recent interview.

That’s how unimealplan, Yonzon and Parra’s off-campus meal plan, came to be. Partnered with Yonzon’s cousin, who lives in the Netherlands, they set off to develop the best possible plan for both students and local businesses; one that was affordable, but also worthwhile for restaurants around campus. The program launched this fall.

Students sign up for unimealplan through the company’s website, www.unimealplan.com. The way it works is different from a St. John’s meal plan, which lasts for an entire semester. Through unimealplan, students purchase one of two options:

The meals don’t run out over a period of time, either. Students can purchase three meals, for example, and purchase the meals over the span of a few months. Currently, unimealplan is partnered with Double Js, Salad Shack, CJ’s and Regina’s — all located on Union Turnpike. Meals then get ordered through the website and can be picked up.

“[I’ve] used unimealplan since September, and it was very convenient for me because I am in rush mode most [of] the time,” Ahmed Mayan, a freshman at St. John’s, said.

The target market for the business are students who live off campus, as St. John’s began requiring all on campus students to purchase a meal plan through the University last spring.

To kickstart the venture, Yonzon said he reached out to manufacturers in China who could create physical cards for students to use, but it was too expensive. So, he placed a call to a random entrepreneur — Reuben Pressman — who advised him to develop his own software in the form of a web application. Presently, there is a unimealplan Android app, but not an iPhone app.

“I like [unimealplan] because there is no cash exchange [or] minimum; I never have cash,” Malia DelaCruz, a senior commuter student who uses the service.

unimealplan is incorporated in Delaware, the pair said, and it currently has no investors, meaning the entire thing is self-funded. According to Parra, they pretty much break even, as they do earn a profit from the business, but have to use that money to purchase tablets for businesses partnering with the meal plan service.

“I think, when you talk about financial returns, no; we’ve broken even,” Parra said. “So we’re not losing money actively, but I think we’ve learned a ton.”

Additionally, they teach restaurant employees how to use the software.

“We have this little training guide for people who are either new hires at the restaurant, so it’s like a walk-through guide of how it works. A lot of the processes that Seamless [and] GrubHub — all these other apps — they don’t have that.”

Aside from the technicalities, Yonzon and Parra said they regularly seek feedback from students. Recently, for example, they said they stood outside of Double J’s for more than one hour to introduce the product to people walking by and ask them about their own problems with eating off campus.

“Right now, we’re in the process of talking to people and finding out what is the right thing…What do they think it is, first of all, and second of all, what do they want,” Yonzon said.

Parra added that the success they’ve seen since launching is the way people have been receptive to their efforts.

Ultimately, the pair said that for now, their goal is to focus on how to best serve the St. John’s community before expanding.