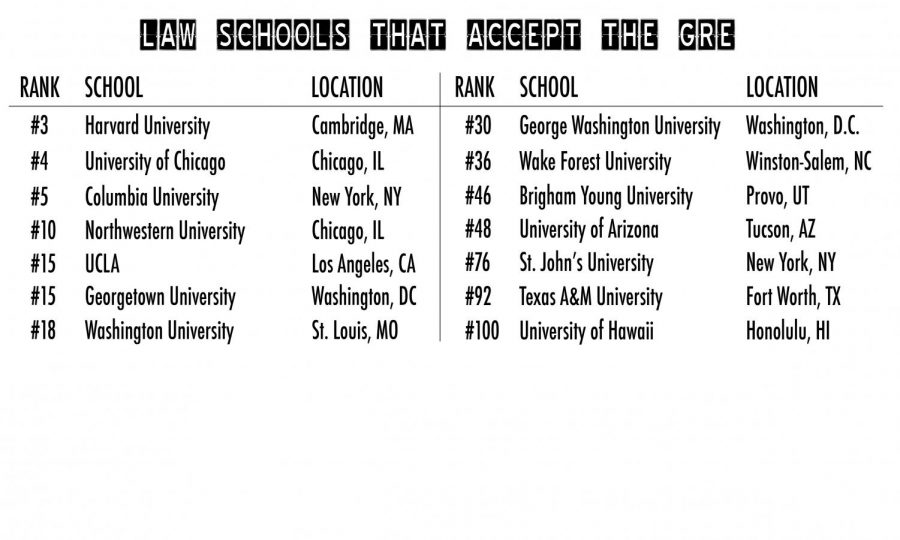 RANKINGS DATA FROM US NEWS AND WORLD REPORT.

On Nov. 9, the St. John’s University School of Law announced that it will begin accepting the GRE from applicants for the class of 2018 along with the LSAT. In doing so, St. John’s joins only a handful of universities that accept the alternative standardized test for law school admission and the second one in New York State, after Columbia.

The American Bar Association requires accredited law schools to use a “valid standardized test” as part of the application process, but doesn’t specify that it must be the LSAT.

According to a press release, the move was spearheaded by Vice Dean Larry Cunningham. “After correlating GRE performance to performance in the first year of law school, we’re confident that the GRE predicts student success in law school,” he said.

The GRE is primarily used for graduate admissions, whereas accredited law schools use the LSAT.

“The GRE also opens the Law School’s doors to a broader, more diverse set of applicants, increasing access to legal education,” Dean Cunningham added. “Not only is the GRE offered throughout the year at an extensive network of locations, it meets the needs of a growing number of applicants who pursue a law degree after obtaining a graduate or doctorate degree in another field, and who have already taken the GRE.”

Although the GRE and LSAT are both used as admission tests, they cover separate topics. The GRE covers vocabulary, reading comprehension, geometry and an analytical writing section. The LSAT is composed of logical reasoning, logic games and arguments/questions with an unscored writing sample. Additionally, the LSAT is offered only as a paper-based exam six times a year while the GRE is available at any time since it is a computer-administered exam.

These differences may lead prospective law school applicants to choose the exam they are more comfortable with.

“I think the benefit to taking the GRE is the similarity to other tests given before,” senior Joseph de Rege said. “It also allows for a larger sampling of people since many people are uncomfortable with the logic of the LSAT.”

“I think it means that they do not have to worry about the LSAT and can bring the quality of law schools up,” he added.

Sophomore Maggie Chen sees this new change as a positive for her.

“I’m really glad that SJU is one of the few schools nationwide to accept the GRE. It’s an advantage,” Chen said.

“It’s great because as an enterprise regulation major, law/business school is on the horizon,” she said. “The GRE sounds like a better choice for me knowing that law school will accept it.”