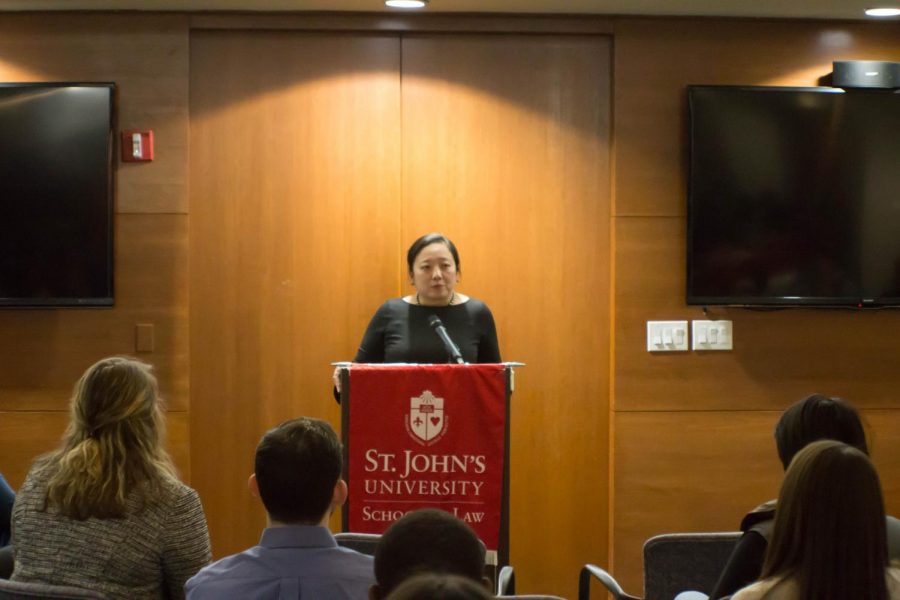 Professor Chiu chose the social media-driven topic for the Day One Dialogue.

The St. John’s Law community held its fourth annual “Day One Dialogue” this past Tuesday, Jan.16 at the Law School.

In collaboration with the Ronald H. Brown Center for Civil Rights, the Journal of Civil Rights and Economic Development, the Coalition for Social Justice, the Hugh L. Carey Center for Dispute Resolution and the Women’s Law society, this school-wide event encouraged an open dialogue on the influence of the #MeToo movement and the power it holds in legal contexts.

This event has been hosted on the first day of classes at the Law School for four years now, prompting its name, “Day One Dialogues.” Past dialogue discussions have included “Gender in America Today” and “Race, Justice, and the Law.” The event was planned by the director of the Ronald H. Brown Center and Law Professor Elaine M. Chiu and Dean Michael A. Simons, who gave an introduction on the event.

Also in attendance was Hannah Artiles-Stravers, the director of SOAR (Sexual Violence Outreach, Awareness and Response) who gave a brief introduction about the programs on campus that are available to students and to any victims of sexual violence.

The decision to choose the social media-driven movement as the topic of discussion was made by Chiu. When asked about the choice to discuss such a topical matter she said,“When the cases of sexual assault started coming out in waves in October we knew that there was an important discussion to have on how the law takes a play in this.”

She continued to discuss how those who are accused and those who accuse don’t always know what this means in legal and law terms.

The “Day One Dialogue” began with Chiu’s introduction of St. John’s Law Class of 2007 alumni William Ng and Kelly Spina, both labor and employment associates at Littler Mendelson P.C.

“What works, what doesn’t work, trying to figure out what the employers need to put in these handbooks is important,” Spina said.

First-time attendee Alexis Ruiz, a sophomore, was glad to see this topic discussed from a legal viewpoint.

“Sometimes people don’t know what to do. Where to go? You feel helpless and like the law isn’t on your side, but that’s not true,” Ruiz said.

After the opening remarks, the room was divided into groups to continue individual discussions on personal accounts and the way the law protects employers and workers.

The dialogue continued in one group with the question, “Have you ever experienced sexual assault or seen it in the workplace?”

“Back during the times that I was working in an office, it was hard to not have seen someone experience sexual harassment in the workplace, especially in my career field,” Turano said.

The event ended when the groups merged back together for a final discussion on what they could do as future employees in the law field for not only the movement, but for employers and workers as well.