A Mid-Year Catch Up With SGI 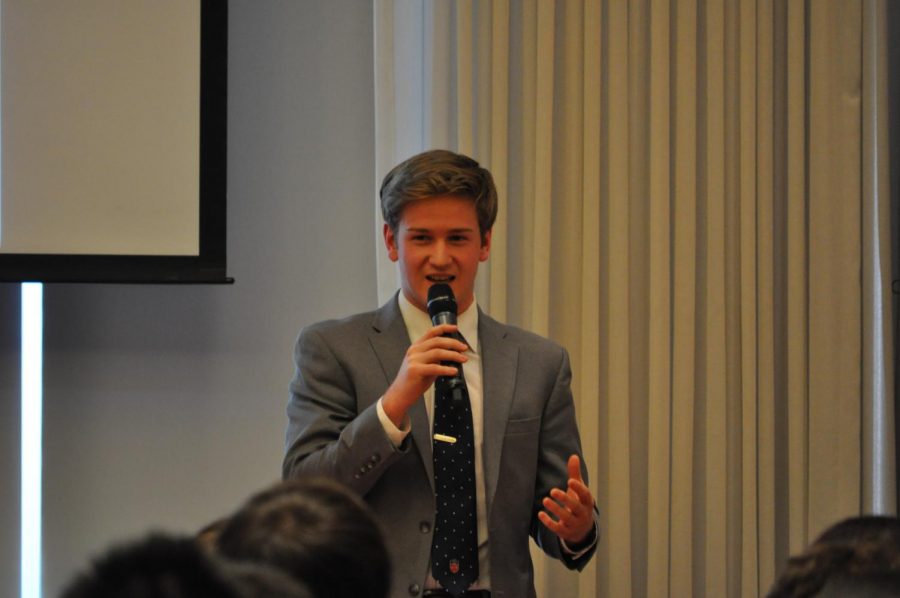 Frank Obermeyer at last year's SGI Debate where he later won for president.

The Torch recently sat down with SGI President Frank Obermeyer to catch up on what SGI’s current e-board has accomplished since it won its campaign in Spring 2017, as well as what goals SGI is still pursuing for students. Obermeyer said SGI will primarily place emphasis on continuing to improve existing processes, such as Power to Organize and SGI committee bylaws.

“The thing we were most proud of going into this year, and one of our biggest campaign promises, was moving our processes for budget management online,” Obermeyer said. “Right at the beginning of the summer, we bought a feature on StormSync that allows student leaders of organizations to submit budget requests online.”

While the budget system still requires that student leaders go through the same channels of approval, they are no longer required to pick up the physical form, get it signed by an advisor and proceed to get it approved at SGI’s office.

“For us as SGI, one of our biggest roles is working directly with student leaders and anything we can do to make their jobs easier and less of the runaround is better for them, so they can focus on the things that matter more,” Obermeyer said, adding that the initiative did not cost much more than the traditional system, since the cost of paper has no.

Obermeyer credits SGI Treasurer Teresa Ehiogu with being the “guardian” of the program and ensuring that every organization fully understands the new process.

“She’s been the overseer of that, which has been super helpful,” Obermeyer said. “It’s not something you can just set up and leave, it takes a little bit for more people to get onboard and understand the process.”

“One of our bigger priorities as a ticket was to try our best to increase our advocacy,” Obermeyer said, referring to the fact that SGI has primarily served as a “very successful programming board,” putting on annual events such as Relay for Life and Winter Carnival.

“We wanted to move more towards advocacy, not really away from programming, but see if we could step our game up in giving students a voice.” he added.

SGI meetings have been reworked to include a designated time at each meeting’s beginning so students can voice any concerns to their elected representatives.

“[Establishing campus dialogues] was more so just making time for advocacy at every single one of our meetings. Making time for any student who wishes to come to our meeting and voice a concern, giving them that opportunity and making that the first thing on our agenda,” Obermeyer said, going on to clarify that while these campus dialogues may not lead to an immediate and noticeable change, the opportunity for representatives to hear their constituents’ voices is a valuable one.

“Ideally, representatives would be out talking to their constituents everyday, but we have to keep in mind that these are student leaders, they’ve got other roles and classes,” he said. “So I think making that time at our assembly meeting was a good step. We hit a couple bumps along the way, it’s harder to manage as I originally thought it would be. We’ve gotten better at it,….the guidelines are very clear. Hopefully as it continues, students will feel more comfortable with the process.”

“Fiona’s been working hard, our goal to start the year was to make sure that as many as our SGI events were using sustainable products,” Obermeyer said.

According to Obermeyer, a major goal of the sustainability committee was to require every organization on campus to use solely sustainable products for its events.

“We originally went in there guns blazing,” Obermeyer said. “But that’s a leap. Hopefully, someday, St. John’s is using almost entirely sustainable utensils—that’s kind of where we’re starting, utensils, plates, cups—but at the moment we decided to take a step back and say, let’s see if we can do this just within SGI first, and then move to the rest of the campus.”

Obermeyer says that while SGI wasn’t able to ensure that the products and utensils used during Winter Carnival were 100% sustainable because the event happened before the committee “had a chance to kind of get on its feet,” the group will strive to make Relay for Life as sustainable as possible.

“SGI’s going to take on a little bit of an extra cost, but we think the greater gain for a big event like that is huge. That’s going to be something we plan to do…I think it sets a precedent for sustainability,” he said.

Applications for SGI’s upcoming election have been live since Jan. 17 and will be open until Feb. 12 at noon.

“Students still have ample opportunity to fill out the applications, they’re not long,” Obermeyer said.

Campaigning will begin on March 5, an earlier date than usual. With this added campaign time, Obermeyer says he hopes that campaigning will be “less of a mad rush within one week and more of sustained outreach.”

The SGI Debate is set for March 22 in the DAC living room, another change that Obermeyer says will make the event more open to all community members, rather than just student leaders. He added that this year’s elections are already looking to be more competitive.

“In the past, I think SGI has had trouble with forming two tickets, but this year I’m confident that we will have a very competitive race,” Obermeyer said. “I think that speaks to the fact that more students are getting involved in SGI. It feels good to see more than one ticket forming, feels less like a formality and more of an actual decision-making process.”

Voting will begin on April 5.