“Fifteen Years After the Creation” of Homeland Security

Former secretary talks past, present and future of the department 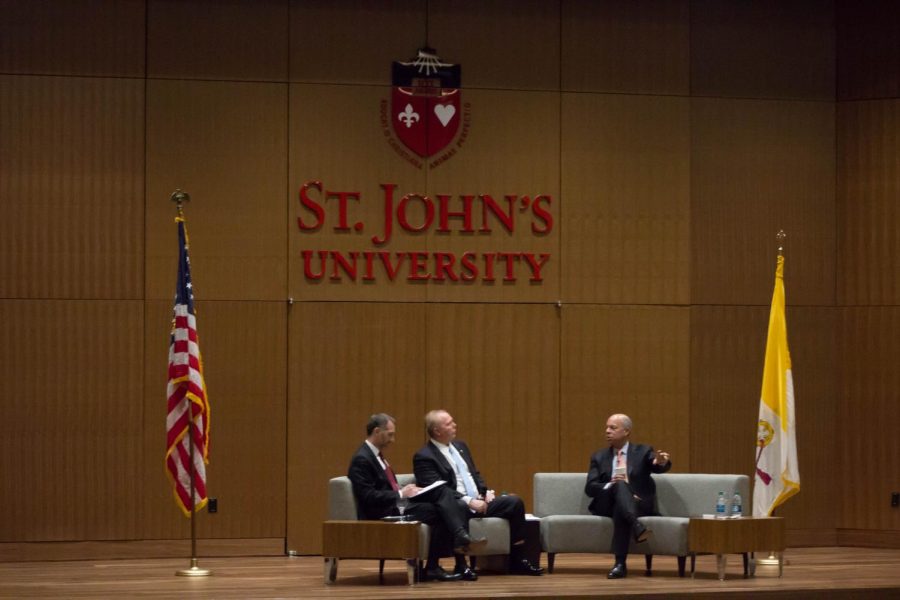 St. John’s University’s School of Law and College of Professional Studies (CPS) invited Jeh Charles Johnson, J.D. and more than 400 members of the St. John’s community to the event “A Guardian’s Memoirs: Fifteen Years after the Creation of the Department of Homeland Security” on Thursday, Jan. 25 in Marillac Auditorium.

The event was moderated by Dean Michael A. Simons, J.D. and Professor of Homeland Security and Criminal Justice and Vice Provost at the Staten Island campus, James O’Keefe, Ph.D. The discussion served to reflect on the nation’s past, present and future capabilities and goals to preserve freedom and overcome multi-dimensional threats.

The world has changed a lot since 2001, and with that change has come a deeper understanding of our strengths and our vulnerabilities.

The United States Department of Homeland Security (DHS) was created in late 2002 as a formal government response to the terrorist attacks that took place on Sept. 11, 2001. The DHS is the youngest cabinet department of the U.S. federal government.

Johnson, a New York City native and the fourth U.S. Secretary of Homeland Security, opened up about his experience leading the department and discussed the many challenges the country still faces today.

“The threat to our nation has evolved significantly since 9/11,” Johnson said. “September 11, 2001 was the most prominent example of what we referred to as terrorist-directed attacks.”

“We now live with the environment of terrorist-inspired attacks, where someone is inspired by what they read on the internet—we have to build bridges to the communities in which ISIS and al-Qaeda seek to recruit to encourage the leaders of those communities to help us in our homeland security efforts and to help them to counter violent extremism in their communities,” he said.

In relation to St. John’s, the University recently announced the Homeland Security, Doctorate of Professional Studies program, making it one of the first traditional, nonprofit educational institutions to offer a doctoral degree in this area.

“I am extremely proud to share that we at the College of Professional Studies also play an important role in keeping America safe,” Dean of CPS, Katia Passerini, Ph.D., said in her welcome address. “How? By educating the current and the next generation of public servants and leaders in this field consistently through our Vincentian tradition of compassionate service.”

Johnson made it a point to emphasize to students that the need for experts in the field of cyber security is increasing.

“It’s going to get worse before it gets better, those on offense have the upper hand, those of us on defense whether in the private sector or the public sector struggle to keep up,” he said. “So first and foremost, I would think about a career in cyber security, or serving your country first—and then we can go work for Goldman-Sachs.”

Johnson also encouraged students in every major to think about serving their country after graduation.

“I think it’s human nature to want to make a difference and to help people,” he said. “We need smart young people who are interested in serving their country, their state, their city and serve their fellow citizens.”