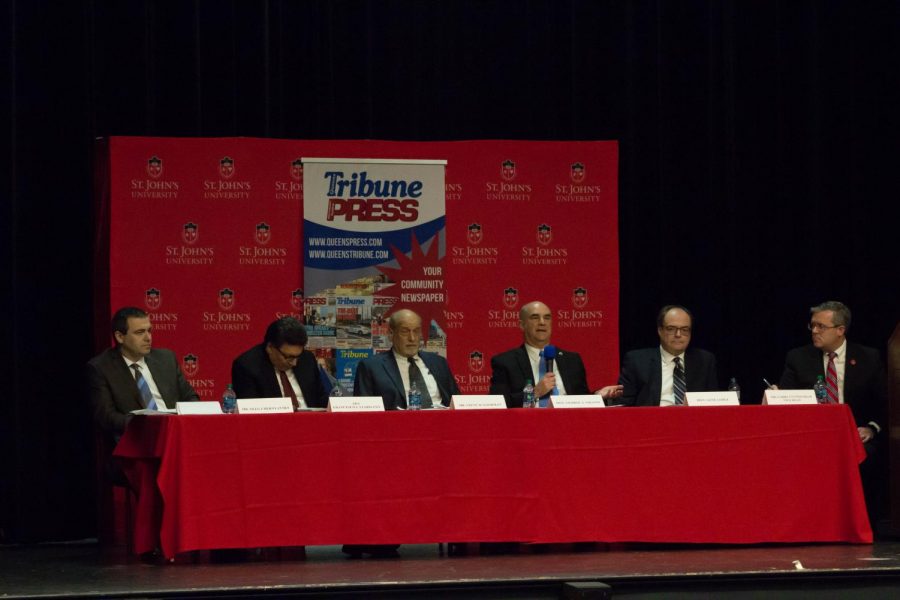 Panelists discussed the question: Is it relevant today in light of the proliferation of gun violence and greater capacity of guns to kill?

Panelists gathered in the Little Theatre on Wednesday Jan. 24, under the moderation of St. John’s University School of Law’s Vice Dean, Larry Cunningham, and the Queens Tribune’s Michael Nussbaum, to discuss the Second Amendment.

They particularly discussed the question: Is it relevant today in light of the proliferation of gun violence and greater capacity of guns to kill?

Panelists discussed how citizens find themselves turning on the TV only to be met with the latest mass shooting in the United States. They argued the biggest opponent to change is the Second Amendment, which is the right to bear arms.

The backbone of the night’s discussion was the case of District of Columbia vs. Heller (2008), in which a 5-4 decision mandated that an individual had the right to keep and bear arms, therefore eliminating the notion that the Second Amendment only pertained to “militia.”

Grasso called this decision a “cop out.”

“The Second Amendment is still in search of a meaning,” Wasserman said.

He added that we are living in a time where everything, in particular advancements made in gun control, could revert backwards. Wasserman also mentioned New York’s strict gun control laws may change if President Donald Trump appoints a judge to the Supreme Court.

Chernyavsky turned the conversation to the new proposal for a national carry and conceal law, that was passed by the House of Representatives.

The Concealed Carry Reciprocity Act would allow citizens in states with looser permit laws to travel with firearms to other states with stricter laws, such as New York.

This residency issue could “turn New York back to the battle days of the mid 1980s,” according to Catarisano. Currently, 13 states have constitutional carry laws that allow citizens to carry firearms with nothing more than a driver’s license.

The conversation also turned to the culture that prevents any progress in decreasing gun violence. Grasso called upon a greater emphasis on mental illness which may affect gun violence.

“We are not doing nearly enough on mental illness across the board,” he said.

Grasso also proposed the idea that gun ownership is not the main factor of gun violence in the U.S., and brought up the possibility of it being partly because of glorification of violence in popular media.

“I wish [the event] had been more well attended. This is a big deal…” Grasso said directly to the audience, stressing that it is time to stop debating about the past and decide on the future.

“I’m a little disappointed that more people didn’t show up,” junior Patrick Pardo said. “However, I’m very glad I learned a lot more … about the stats and what real people in the field such as judges, attorneys [and the] district attorney’s office think about this important subject.”

One student though it would have been better for the judges to give “their ideas of how to move forward with gun control and gun violence.” They were not allowed to give their opinions in regards to the Second Amendment.

“I think it was advantageous to learn about all that stuff but I think there was a roadblock that they couldn’t really give their opinions on what they think could help gun violence and gun control,” junior Alexis Contreras said. “So I think that was the only bad part of it. Maybe for the next panel … get people who can give their opinion.”

However, Nussbaum was happy with the outcome of the event overall. Although he acknowledged attendance wasn’t very high, he did think it was an important issue to discuss.

“On the issue of gun control, gun violence and the validity of the Second Amendment, I was happy because I was just impressed by the depth of discussion,” he said. “So if you had two judges, you have a senior district attorney, assistant district attorney, someone from the police department and someone on the other side whose the defense attorney — they all understood each other’s position. You didn’t have the diametric left or right so I was very happy with it.”