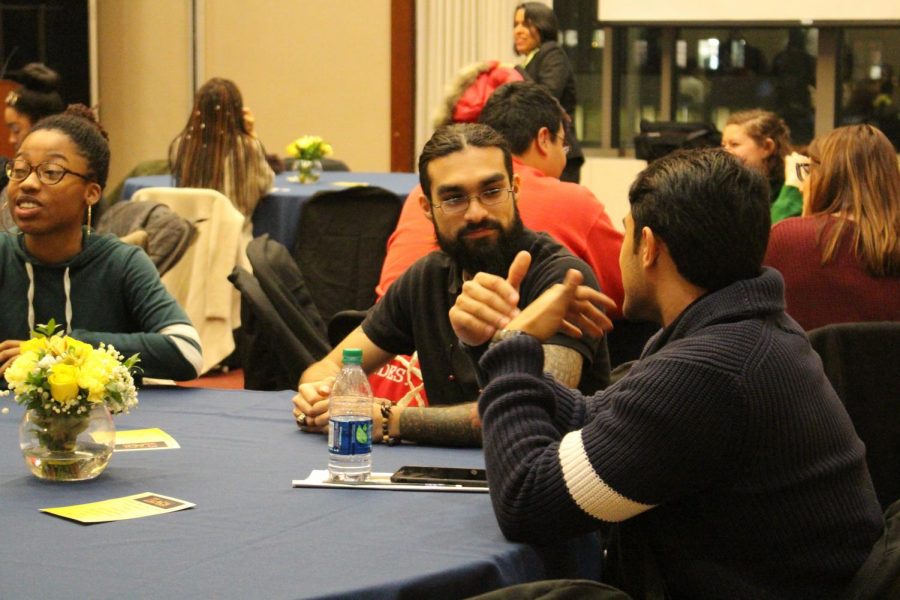 Students packed the D'Angelo Center ballroom to listen, discuss and celebrate the legacy of MLK.

The event, hosted in the D’Angelo Center ballroom, permitted students and staff to reflect on the events upcoming in the month and also on the impact that Martin Luther King Jr.’s legacy has had on their lives and work.

The event began with Dr. Ansel Augustine, the DaSilva Hall Residence Minister, opening with a brief dialogue about the strength of the black community and the impact the church has had on the continuance of the endurance of the community.

He called the community “a strong people, a people of faith,” especially in terms of civil rights activists like King, Thurgood Marshall and Rosa Parks.

After Augustine’s words, Josiah Berell, a member of Voices of Victory, sang the Black National Anthem.

The student influence continued with a special presentation of Libation by students Kenneth Shelton and Claire Robinson.

“It’s a way to honor the ancestors of the Pan African diaspora,” Robinson said.

The ceremony consisted of both Shelton and Robinson pouring water into a plant after the names of ancestors were read aloud.

“Call the name and pour water in the plant, then say ‘ashe,’” Shelton said.

Names like Nat Turner, Harriet Tubman, Ella Baker and King were called as the room chanted “ashe” to show respect to the ancestors who sacrificed their lives to resist slavery and demand change.

Moderator of the night, Associate Professor Manouchkathe Cassagnol introduced the discussion panel that discussed King and the impact he had on their work.

Each discussed different topics of King and the black community.

Hopson stressed the importance of the current generation and the future leaders of tomorrow, asking “How are the children? How are you? How is our next generation? Have we equipped you with the resources for your survival, for your success?”

Augustine gave a personal anecdote about growing up in Louisiana and the effect that Katrina had on his home, his faith and his relationship with the community. Like the other panelists, he discussed the famous Birmingham Letter that King wrote to fellow clergymen while in a Birmingham jail for one of his many protests against the unfair treatment of blacks in Birmingham. Augustine quoted King saying, “The time is always right to do what is right.”

After each panelist spoke individually the floor was open for questions and many students had them. Students, including Morgan Bell, asked questions along the lines of, “How can we as a campus stay united, especially in these times and with all the different multicultural organizations, how can we find common ground?”

Byfield answered by saying, “Every social movement has had to deal with this and when they can’t face their differences they turn into factions. You have to realize that we are all united for one common goal and must work together.”

“Even though we all have different missions, we still have the same goal to uplift the minority demographic that we represent,” Bell said.

Several students from these organizations were present at the dinner including President of ASA Atem Tazi and Vice President of LASO Sieta Leon.

Bell, a senior and the president of the St. John’s chapter of NAACP, enjoyed the dinner and discussion.

“This conversation is only a piece of everything, with each event that we do we need to continue the momentum that was started here,” she said.

While enjoyable, Bell would have liked to see more diversity of age in the panelists.

“To not have students on the panel was a little confusing to me,” Bell said. “The panel should have been a mix of students and administration.”

Another student in attendance was freshman Tiana Hall, who was glad that there were events like this on campus.

“I think it’s great,” Hall said. “MLK has done everything, I can walk the same street and have the same career in the future as any other person. I believe that he brought that for us and put his foot in the door so we could do that.”

This event was only the beginning of a month-long calendar of celebrations and discussions hosted by many multicultural organizations and the Office of Multicultural Affairs on campus.