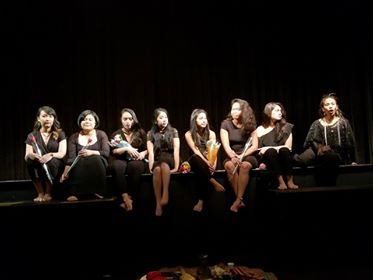 'Raised Pinay' brought students' memories of their culture and upbringing to the Little Theater.

Under the direction of Jana Lynne “JL” Umipig and producership of PARE (Philippine-Americans Reaching Everyone) and its alumni, on March 1 the Little Theatre was graced with “Raised Pinay,” a feminist benefit show telling the genuine growing-up experiences of seven Filipina and Filipina-American women.

Raised Pinay comes in the place of PARE’s annual charity showcase, PARE with Benefits. Due to inclement weather, the March 2 performance was postponed and rescheduled for April 8.

Following the opening performances came emotional performances from alumni Gabrielle Luz Roque, Sabrina Abesamis, Triz Dearoz and Maria Marquez and juniors Lizandei Bernardo, Lauren Ruiz and Brittany Tunac. Told in a narrative style and equipped with escrima sticks, sticks that are used in Filipino martial arts, that, along with deep breaths, transitioned stories with a change of rhythmic beating. The performers took turns poignantly recounting their memories in spoken word.

Dearoz’s story in particular captivated the audience when she paused to take a breath and wipe away her tears as she detailed her mother’s forced abortion by her grandmother, who would have grown up to be her “ate,” the Tagalog word for older sister.

“‘Raised Pinay’ was a beautiful experience,” junior and performer Lauren Ruiz said. “I never realized I would gain sisters in the process but I did.”

Ruiz said that the event was a “safe space” for her, where she could open up and really find herself. “I was scared no one would relate to our stories but a lot of people did. It was a success I believe and I’m happy I got to share my story,” she said.

At the end of the event, the director and performers came together for tight hugs and a thoughtful discussion with the audience. One audience member pointed out that a majority of the pieces had to do with their mothers, and questioned whether the performer’s mothers were aware of how they felt. This prompted Absemais’s mother to come forward and hug her daughter, relaying to the audience that, while she was taken aback by the performance, she understood the message being given.

“Raised Pinay” finished with a video from “Roots of Health,” the organization being sponsored, and a raffle consisting of Raised Pinay merchandise and artwork from student artists as well as prominent artists, including Anna Leah Sanson and sisters Gigi and Grace Bio.

All proceeds from the event will go to Roots of Health, a Philippine organization dedicated to supporting and empowering women in Palawan, Philippines.