Faculty diversity and evaluation at head of concerns 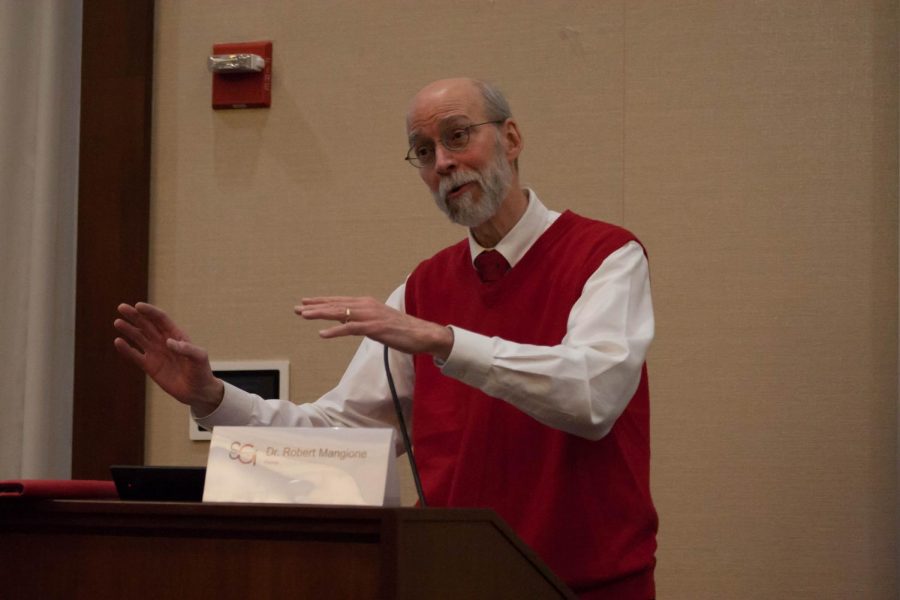 Dr. Mangione addressed students on March 1 at the meeting.

Each seat in the D’Angelo Center Ballroom quickly filled with at least one representative from the executive board of each SGI Recognized Organization.

Students were allotted one hour to pose questions to present members of administration.

Students had the opportunity to pose questions during the event at the microphone and students that were not able to attend were able to submit questions beforehand online.

That included Dean Norean Sharpe of the Tobin College of Business, Dean Jeffrey Fagen of St. John’s College of Liberal Arts and Sciences, Dean Michael Sampson of the School of Education, Dean Katia Passerini of the College of Professional Studies, Dean Russell DiGate of the College of Pharmacy and Health Sciences and Dean Valeda Dent of the University Libraries.

Other members of administration were also in attendance.

The forum served as “an opportunity for students to engage in constructive dialogue with administration,” according to SGI President Frank Obermeyer.

The recent approval of a new core curriculum was the first topic of conversation at the forum, which Mangione said is expected to be enacted soon at the University.

“If [the new curriculum] is approved, we will then work towards implementation with a likely start date of either fall of 2019 or fall of 2020,” Mangione said.

Mangione added that students enrolled at the University prior to its implementation will be held to the current core standards.

The first question posed at the microphone shifted the conversation towards the absence of an Africana Studies major.

“This came up a few years ago and we investigated with some students who have long since graduated, and there just wasn’t enough student interest,” Dean Fagen said.

“That may have changed [now]. We are always looking to develop new majors,” he added.

Mangione responded to the issue of faculty diversity and stated that the University is working to improve the current status of the issue.

“We have made some progress, last year was a fairly successful year, but we are not satisfied with that progress,” Mangione said.

Chief Diversity Officer and Associate Vice President for Human Resources Nada Llewellyn stated that the University is taking a “two pronged approach” with the issue, partnering with an external consultant in order to achieve maximum success.

“We’re having a reach that we haven’t had historically with the hopes of yielding more candidates,” Llewellyn said.

Llewellyn added that the University launched a training and development series for current faculty members involved in the hiring process in order to support the approach to diversifying faculty.

“I think it would have been good to hear a little more detail on how, specifically, they’re working to develop the training program,” Freshman Representative for the College of Professional Studies Hannah Sesay said.

The conversation shifted towards current faculty and how their academic performance is reviewed, along with review of student concerns.

“Unfortunately sometimes people do not live up to our expectations and do not do what they’re supposed to do,” Mangione said.

Mangione stated that the manner in which complaints concerning faculty are handled are generally case-specific. Although professor evaluations are reviewed by their respective department chair, the department chair does not see the open-ended responses at the end of the evaluations.

“I do not follow up with the department chairs, maybe I should,” Fagen said. “The other avenue is to our office if you have an issue that hasn’t been resolved.”

Students also voiced concerns about the resources available for those on the Pre-Health track and opportunities for them to pursue a major not directly correlated with their track, but no immediate solution was offered.

Questions that were not able to be answered within the hour-long forum were to be collected and answered at a later date.

“A lot of the concerns that were raised today are just long term issues, they need minor corrections now that will stop them from going down the same path,” senior Robert Sluka said.