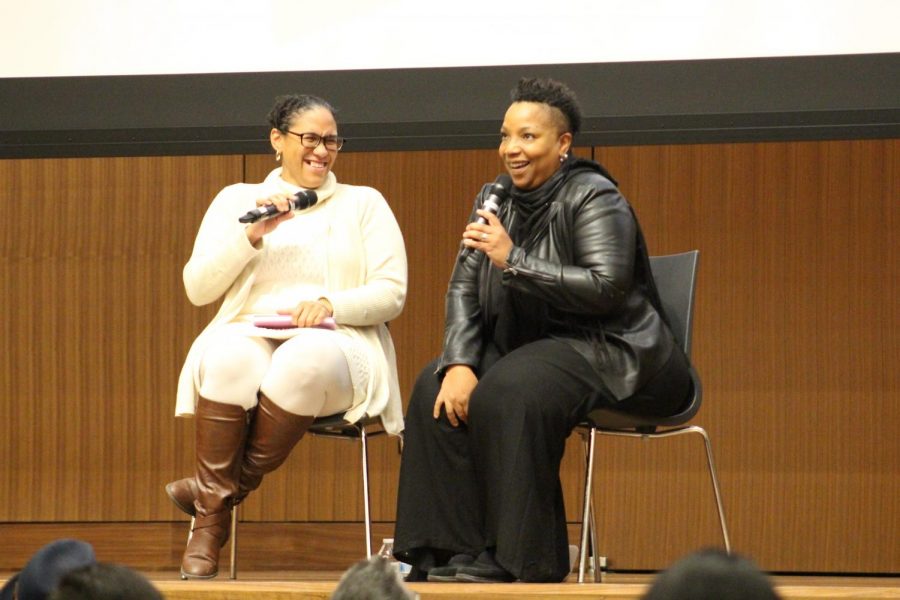 “Buenas tardes [Good afternoon],” Yolanda Arroyo-Pizarro, the keynote speaker for the Caribbean Writers Lecture Series at St. John’s University, said as she began her speech for the students, faculty, administration and other visitors from the New York City area.

On Monday, March 12, an intimate group gathered in the Marillac Theater during common hour to hear the award-winning Puerto Rican author speak.

She was introduced by Raj Chetty, an assistant professor in the English Department who specializes in Caribbean studies; Sieta Leon, president of the Latin Students Association Organization (LASO) and Anelis Acevedo, treasurer of LASO.

The event was sponsored by the M. T. Geoffrey Yeh Gallery, the Office of the Provost, the Office of Multicultural Affairs, Division of Student Affairs, Caribbean Students Association and LASO, among others.

Arroyo-Pizarro began her lecture with a brief excerpt from “Citizen,” a critically-acclaimed book by Jamaican-born author Claudia Rankine, while translating some of the words to Spanish as she read.

She then read her own piece, where she reflected on the police brutality, racism and discrimination that Afro-Latinos and black people still endure — in Puerto Rico and in the United States alike.

She repeated several names throughout her discourse, such as Sandra Bland’s, who in 2015 was reportedly found hanged in a jail cell after being arrested during a traffic stop in Texas. When talking about this, she briefly put her black hoodie on.

She also mentioned Alma Yarida Cruz, a Puerto Rican girl who was arrested at school and had several charges brought against her by fellow classmates who claimed she was violent to them.

“Is Alma Yarida a citizen? Is this 11-year-old Afro-Puerto Rican girl that the Puerto Rican justice department wanted to put in jail because she defended herself of racial bullying a citizen?” Arroyo-Pizarro said.

Following her speech, Vanessa Valdés, associate professor of Spanish and Portuguese at the City College of New York, had a conversation with her on the stage.

Valdés began the conversation with a question about the image on the cover of her book.

It is a black and white image of Arroyo-Pizarro, which accentuates her thighs.

Arroyo-Pizarro explained that the photo was taken by her wife, Zulma Oliveras Vega, while they were in a conference of “lesbo, trans and feminista in Chiapas Mexico.” She felt as though that experience was more than a learning process, it was as though she’d “been born again.”

“It was so powerful because not only were we there with sisters that fight for our rights, but we were also there with new sisters, that we usually marginalize — trans-women and Afro-feminist women,” she said. “We talked about feminism and Afro-feminism, which is not the same thing.”

Valdés explained that she asked because in “negrista poetry” — which is poetry written on Afro-Cuban themes, usually by white males, according to an article by Miguel Arnedo in the Afro-Hispanic Review — they tend to highlight Afro-women’s bodies and physicality.

“If you read negrista poetry or if you hear about black women at all … often times, you know it’s [about] hair, lips, hips and thighs,” Valdés said.

One of the main themes in her the talk was about growing up in Puerto Rico to constant “harassment” by her classmates and subtle jabs by teachers in regards to her appearance. With time, she learned to accept herself and, most importantly, love herself.

Valdés also asked why it was important for her to emphasize the names of those who have suffered due to the color of their skin.

Arroyo-Pizarro then answered, “I teach a class and it goes back to the slave period, so we realized how the masters re-baptize the slaves and it’s incredible … with the explicit desire to dehumanize you, taking your soul.”

“I know how powerful it is to go back to those names and those names that I used,” she said.

Students then had the chance to ask her several questions. Those who asked questions did so in Spanish and the conversation, as they often do, became bilingual.

She said, “It was great seeing someone talk about the unique experience of Afro-Latinidad, not only because it was educational for those who don’t have that experience, but also because it shows the people who do that we aren’t alone.”

Once the event ended, a select group of students, faculty and other visitors made their way to a private room in the D’Angelo Center. There, they were able to introduce themselves to Arroyo-Pizarro, mingle and have dinner — which featured arroz con guandules (yellow rice with peas), pollo asado (grilled chicken) and mangú (a dish made with plantains).

Francisco Pérez, who came to St. John’s from Puerto Rico, was among the students present.

He said the event as a whole was “insightful.”

“Yolanda’s experience shed light on the history of racism, colonialism and imperialism that has influenced the United States and Puerto Rico’s political relations,” he said. “Another thing that surprised me was her use of the word “citizen” to emphasize the treatment of Puerto Ricans as second class American citizens.”

The Torch had the chance to talk with Arroyo-Pizarro, who thanked Chetty; Robert Rivera, assistant professor of Theology and Religious Studies and Yulia Tikhonova, director of the M. T. Geoffrey Yeh Gallery, for inviting her to speak on Rankine’s book.

“I came to St. John’s because they invited me to talk about Claudia Rankine’s book, which is spectacular and makes you introspect and allows you to perform a radiography as a human being — where do I stand, what are the causes I support and which one’s I should,” she said.

She said her book inspired her to write her piece, which she believes she may make into a stand-alone book.

One of the issues brought up during the lecture was the lack of education in Puerto Rico regarding Afro-Latinidad culture and decent.

She said that she leads an initiative to improve this aspect of the Puerto Rican education with La Cátedra de Afrodescendientes: Mujeres Negras Ancestrales (The Chair of Afro-descendants: Ancestral Black Women).

“We create consciousness through stories — which can be converted into novels, child books, teen books — once we investigate the black women from the past,” she said. “Of course, we’ve also come across important black men, who we also dedicate our time to, but not as much as the women.”

Arroyo-Pizarro made it clear that she believes that it is time for women to be emphasized and represented more than ever, but that this doesn’t mean that men shouldn’t be a part of the movement as well.

She also mentioned that although there are other groups trying to raise awareness about the Afro-Puerto Rican community, that the Department of Education in Puerto Rico has not stepped up.

“I implore that the Secretary of Education, Julia Keleher, notice that we are in 2018 and to watch the Department of Education’s priorities, which she’s also disarticulating,” she said. “She needs to observe the priorities that even the United Nations has marked as the decade of Afro-descendancy celebration and to insert herself in that movement … I feel that with her leadership, the cause has slowed down the movement.”

Arroyo-Pizarro hopes to return some day to St. John’s and said that her message to students is the same as the one she received from Rankine’s “Citizen.”

“To look at the world, to investigate and to notice the inequalities that still exists and to take a stance,” she said. “The time to sit and observe as if it was entertainment has passed, we need to take a stance and place ourselves with those who suffer and against the oppressors.”

She added, “We need people who will do more for the other, and the other is Puerto Rican, black, women, gay, Muslim — the other. We have to do more for that other human.”