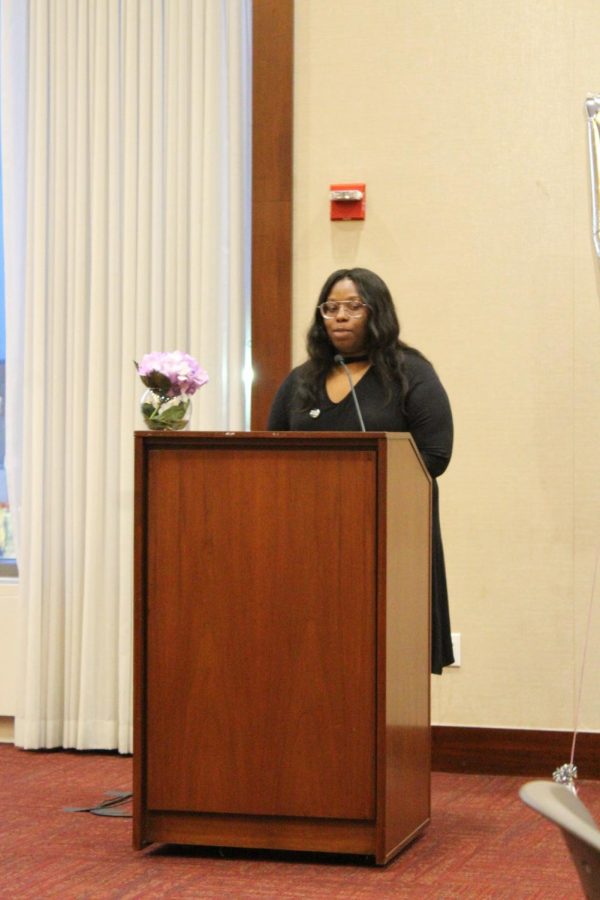 Those who attended were encouraged to wear black attire in honor of women’s solidarity and to adhere to the future is femme theme. Upon entering, guests received a “Time’s Up” pin to wear throughout the night.

Donations of feminine products were also being collected — this drive will continue throughout the rest of the month in a box that can be found within the Office of Multicultural Affairs.

A picture of notable women with a description of who they are and how they made a difference in women’s history were placed on each table.

Jasmine Hinnant, assistant director of the Office of Multicultural Affairs, helped decide on these decorations to help every individual woman feel represented among the movement.

The overall theme of the dinner centered around the celebration of Women’s History Month, as well as the empowerment for today’s women entitled “Future is Femme.”

The Vice President for the Division of Student Affairs, Dr. Kathryn Hutchinson, served to welcome guests by expressing and informing everyone about the awareness behind this theme.

“In a year that has seen women from all walks of life rise up and speak out on issues of equality, it’s also an opportunity to join together and bring global attention towards accelerating gender parity and the gender parity timeline. Highlighted by the 2018 theme of International Women’s Day which is pressed for progress,” she voiced.

She then continued by telling the audience facts about how women are entering the workforce at a faster rate than ever.

Jasmine Hinnant then took the podium to thank the leadership team and everyone that helped put together the dinner. She expressed that, to her, feminism does not only include femme identifying people, but that it must also include those with different backgrounds, nationalities, abilities, classes, political views, ethnicities, genders and sexualities.

“As this month continues, please remember that feminism is nothing without intersectionality and inclusion,” Hinnant said to listeners.

Campus Ministry Residential Minister, Victoria O’Keefe, continued by leading and blessing everyone with a prayer.

This was followed by a special performance by Sinai’s Radiant Liturgical Dance to JJ Hairston & Youthful Praise’s single, “You Deserve It” featuring Bishop Cortez Vaughn.

The last presenter of the night was the keynote speaker and Staff Attorney, Jessica Lazo. As a first generation Ecuadorian-American who was the first in her family to graduate college, she took to appreciate the opportunities that St. John’s offered her to be able to achieve her goals and continue on by going to law school.

She had the audience write down on an index card who their heroes, supporters, motivators, employers and mentors are in their lives.

She also talked about the experiences she had gone through that allowed her to recognize who she is and how capable she was of being able to become a bilingual immigration attorney, despite her previous doubts that might have held her back.

Something that she wanted the audience to take away from her talk, was her breakdown of the 5 things that a woman stands for, “A is for aptitude, B is for bravery, C is for compassion, D is for decisiveness and E is for empathy.”

To finish off the night, dinner was served as well as free giveaways for guests. Awards were then handed out to the women involved in organizing the night.

As Women’s History Month continues, there’s a schedule of events that will go on throughout the month to celebrate and empower women.