A Living Conversation About the Dying 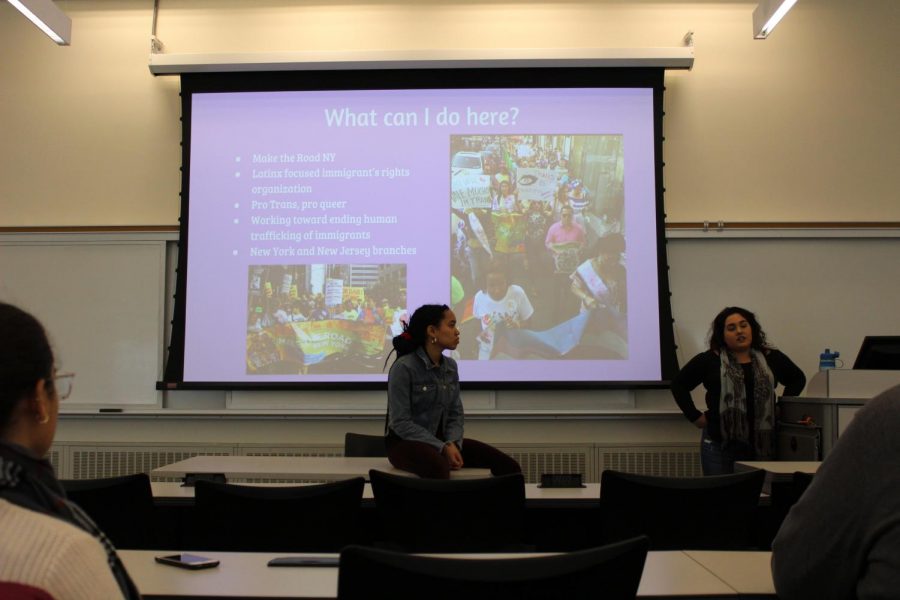 Sieta Leon and Marilyn Alexander talked about the word and topic, “femicidio.”

Feminists Unite and the Latin American Student Organization (LASO) held a discussion about “Femicidio in Latin America” on March 15, in honor of Women’s History Month.

The event was led by Marilyn Alexander, social media coordinator of Feminists Unite, and Sieta Leon, president of LASO.

Alexander began the event by explaining what exactly the word “femicidio” means.

“Femicidio [or Feminicidio, meaning femicide] is the killing of women or girls based on their gender. So usually this word implies the complicity of the state, meaning the nation that allows this to happen,” she said.

The presentation that accompanied the discussion showed how Latin America is one of the most dangerous places in the world for women. Guatemala, El Salvador, Colombia, Mexico, Suriname and Brazil are the seven nations with the highest rates of femicide.

To initiate a discussion, Leon and Alexander asked the audience if anyone had an idea as to why the violent acts mostly target women.

Responses varied but were similarly centered around the traditional view that men have power and control over women. In agreement that this is an issue in Latin America, students voiced that the acts of violence occur more frequently because there is a lack of strict law enforcement that may be able to help prevent this.

“Usually the cases of women dying are because of their partners or ex-partners who are obsessive or abusive and there’s a lack of proper response by authorities. So when dealing with these cases, women have no way to protect themselves because nothing is guaranteed that they’re going to be okay,” Leon said.

Leon and Alexander took time to discuss the many different instances that lead to femicide. Central American women who cross the border into the United States, for example, often become victims of rape and sex trafficking that results from drug wars.

Transgender women are also victims of femicide, but deal with much different circumstances.

“Transgenders are not allowed to change their gender or their names in their legal documentation making it much more difficult for them to find stable jobs so they turn to sex-related jobs, which allow for more violence,” Alexander said.

Abortion is illegal in Latin America and this is another factor that contributes to the violent acts that further oppress women and take away the control they have over their own bodies.

Protests have been held in Latin America that are very similar to the Women’s March in the United States, however due to a lack of intersectionality in these Latin American movements, some question how they can be improved.

Students agreed that until colorism becomes less of an issue, it’s going to be hard to end femicide because indigenous women and those of color are not as protected under the law.

Alexander and Leon said that in order to increase intersectionality, it’s important for all voices to be heard. Although women in Latin America may come from different backgrounds and face different kinds of issues, it is important for them to all be heard.

To conclude, Alexander informed students of “Make the Road New York,” an organization that centers around building Latino power and is also supportive of LGBTQ rights.