A Time to SHinE for Student Employees 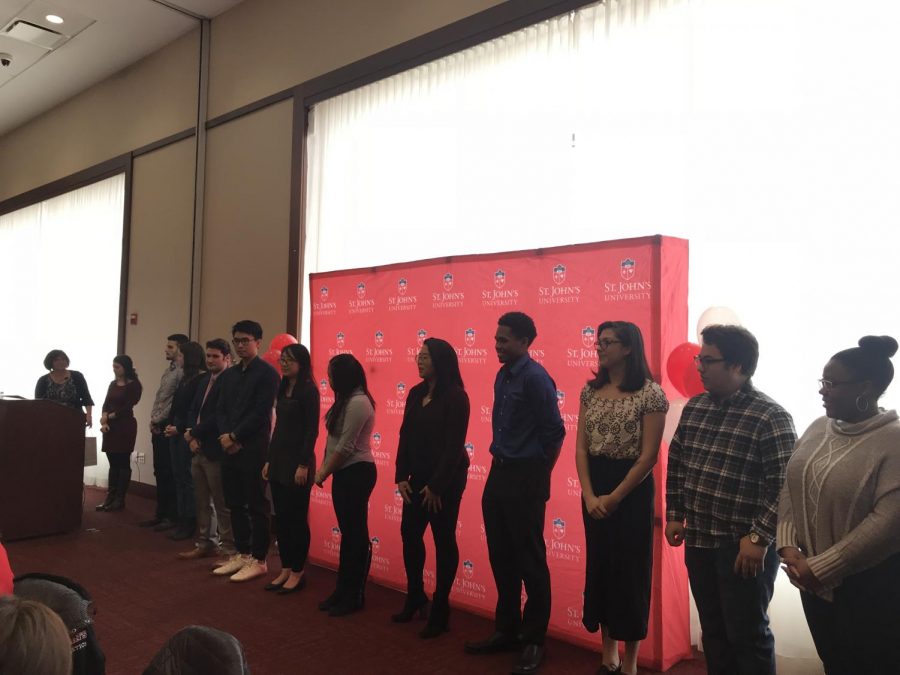 The University employs more than 1,500 students each year and 52 were nominated for awards this year.

The University employs more than 1,500 students each year and this year a total of 52 students were nominated for this special recognition, according to Associate Vice President for Human Resources, Nada Llewellyn.

Out of the 52 student nominees, there were 16 semifinalists and four final award winners that went home with a plaque and gift bag in honor of their achievement.

“It means a lot to me, I’ve been working for the department for four years now,” semifinalist Taylor Pearl of the Department of Art and Design said on her nomination.

“I’m always so happy that the students appreciate the recognition and that the supervisors are happy that we recognize them,” Student Employment Manager Mary Cascio said. “I think it’s a wonderful event.”

After St. John’s received an award in 2013 from the College and University Professional Association for Human Resources based on its student employment program, the SHinE program was erected.

“The Program aims to motivate student workers to take initiative and strive for excellence while honing skills that are important for success in any career,” Cascio said.

Nominees are rated based on numerous criteria such as teamwork, attendance, accountability, innovation and several other factors.

“This year I was honored to be asked by Mary Cascio to join the SHinE selection committee,” Director of Operations and Data Analysis Christine Randall said. “The experience of reviewing all of the nominations gave me great insight into the wonderful opportunities that all of the supervisors in this room have offered their students.”

“This means a lot to me because I’ve always considered my work ethic to be one of my best points and I come from an immigrant family, so in a way this kind of represents my family,” senior Brian Lin said.

“This is my first year working on campus at St. John’s,” Lin added.

Senior Christopher Parnell, who works at the University Learning Commons as a Chemistry tutor was awarded for his outstanding efforts in helping students succeed.

“This award is meaningful for me because I personally want to go into teaching in the future and to have success as a tutor it seems to me as if that’s the first step on going toward my life’s goals,” Parnell said. “This award is very meaningful to me.”

Through the program students are encouraged to take initiative and strive for excellence while honing skills that are important for success in any career, according to Cascio.