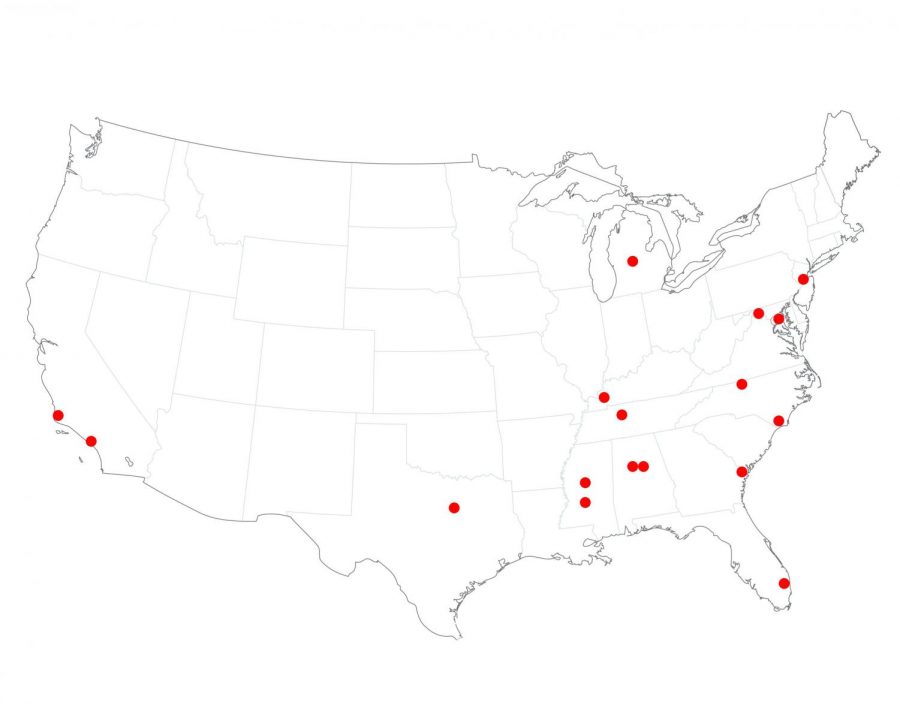 Hardly a week has gone by in 2018 without a school shooting somewhere nationwide.

As of March 20 there have been 17 school-related shootings so far, according to CNN. The Parkland school shooting in Florida on Valentine’s Day left 17 dead and 14 injured, and rattled a nation of students, parents and teachers grappling with how to stay safe.

There have been more than 300 school shootings in the U.S. since 2013 — an average of about one shooting per week, according to Everytown for Gun Safety, an organization that seeks to reduce gun violence in America.

It’s hard not to become numb from the repeatedly scary storylines. There were 10 killed at Umpqua Community College in Oregon in 2015, 26 at Sandy Hook Elementary in 2012, 32 at Virginia Tech in 2007 and 13 at Columbine in 1999, among many others.

Here at St. John’s, students reacted to the recent rash of school shootings nationwide with a range of emotions — some were concerned about their safety while others were frustrated with the lack of legislative action. One student even expressed worry about her decision to make teaching a career.

Denise Vencak, executive director for Public Safety, said St. John’s is taking the proper precautions in the wake of the many shootings nationwide.

“As threats evolve and change, so do we,” Vencak said in a statement. “Public Safety engages in a regular assessment of emergency protocols and procedures to ensure that we are engaging in best practices to keep the University community safe in responding to evolving threats.”

Junior Tiffani Sookralli lives about 15 minutes away from Parkland, Florida where the largest mass shooting at a school recently occurred. She said she cried for days.

“I could relate to them knowing the area, the people and the drills we are regulated to do in Broward County,” Sookralli said. “Nothing can truly prepare you for a situation like this.”

School shootings, including elementary, middle, high school and college, have consistently occurred in the U.S. since the Columbine High School shooting in 1999, the tragedy that sparked decades of heated debate over the need for gun control legislation.

Between 2013 and 2015 there have been 76 shootings at colleges, 35 at high schools, 13 at middle schools and 24 at elementary schools, according to Everytown.

The Virginia Tech shooting of 2007 is the most notable on a college campus where 33 people were killed and 23 injured. The incident is the third-deadliest mass shooting by a single gunman in modern U.S. history.

Sky Tiongson, a sophomore at St. John’s, hopes to be a kindergarten teacher and said these shootings are a concern of hers moving forward if gun legislation does not change.

“I’m studying to be a teacher and the idea that I may one day have to hide my kindergarten students from a gunman is terrifying and is not something any student should ever be concerned about,” she said.

“There is no reason anyone needs a gun at age 18, meanwhile we can’t have a glass of wine until 21,” Tiongson added. “They need to have stricter tests to make sure that the person is mentally well and they should make sure that the results come back before selling the gun. I don’t blame mental illness for misuse of guns but I blame the system for making guns available to those who are not mentally well.”

Freshman Edward Ostuni thinks there should be stronger restrictions on who can get a gun.

“I believe gun regulation should be limited because of our right to bear arms but I do believe there should be some type of psychological test to keep the guns out of the hands of mentally unstable people,” Ostuni said.

St. John’s is not immune to these situations.

In May 2016, just days before the end of the spring semester at St. John’s, three males entered room 510 in Hollis Hall and opened fire with a revolver, according to the Torch. No one was injured.

In response to the event that occured in Hollis in 2016, Vencak said, “Public Safety responded to the scene immediately, and the NYPD was notified. The individuals involved were apprehended within minutes.”

In September 2007, just months after the Virginia Tech shooting, a student brought a rifle onto the St. John’s campus and was apprehended by a Public Safety officer and a student who also was a NYPD cadet.

The University says it has multiple initiatives in place that it is constantly reviewing. These include Active Shooter Preparedness Trainings, which have become mandatory for incoming freshman for the past three years, and more recently an increase in campus security.

Vencak declined to detail Public Safety’s specific safety protocol for these types of situations, saying only that they would respond immediately along with the help of the NYPD.

“Concerning prior incidents over the years, similarly, Public Safety and the NYPD engaged in coordinated responses to contain threats,” she added.

Ostuni, one of the students who spoke with the Torch, believes that Public Safety does a good job of keeping students safe on campus. But he said “there should be more security getting into buildings and on campus, such as present ID cards or permits to be there.”

“Anyone can walk onto the campus which is a little scary,” Sookralli said.

Tiongson argued that arming Public Safety officers should be considered.

When asked about the possibility of arming Public Safety officers, Vencak responded, “We regularly evaluate and adjust our Public Safety protocols and practices.”

Vencak’s advice to students in the event of an active shooter on campus is to familiarize themselves with the video shown at Active Shooter Preparedness Training events, which can be found on the Public Safety web page under “Emergency Preparedness.”