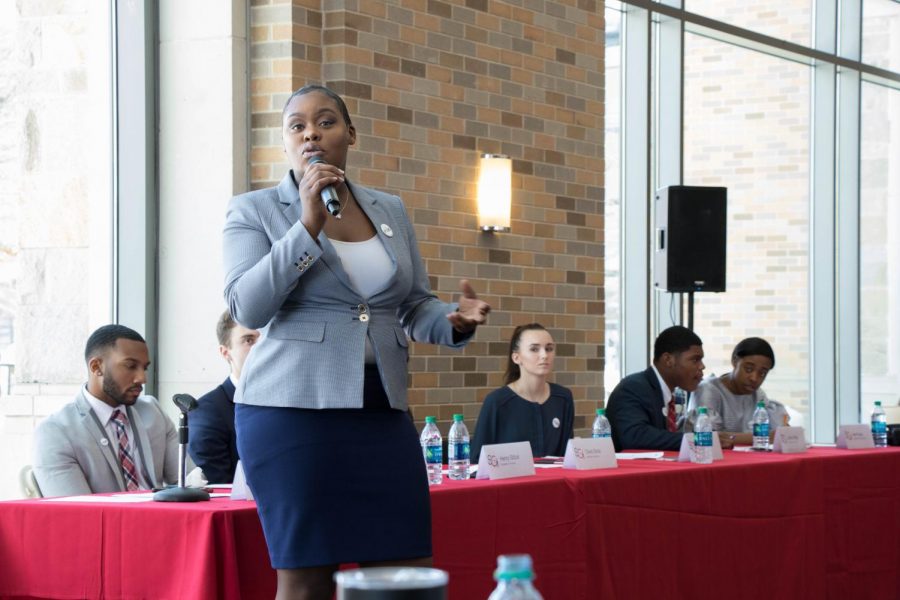 Students and faculty gathered in the D’Angelo Center Living Room on March 22 to hear and see what could be in store for SGI next year at the annual Student Government Inc. Debate.

The Living Room was packed with students and representatives from all organizations on campus, and despite technical difficulties with the sound system, got a look at the 2018-2019 candidates.

The debate covered an array of St. John’s relevant topics, but advocacy and accountability stood out with all candidates.

Moderated by the Torch’s Editor-in-Chief, senior Suzanne Ciechalski, and current SGI President senior Frank Obermeyer, Ciechalski asked her own prepared questions to the P.L.U.G. and S.E.E.D. tickets as well as an independent candidate while Obermeyer introduced a new “Poll Everything” forum for the audience to come up with questions for the candidates.

Candidates kicked off the debate with sharing their backgrounds and what their platform advocates for. PLUG stands for Personality, Legacy, Unity and Growth; S.E.E.D. stands for Students Engages in Education and Diversity.

“We want to give a face to student government so students feel comfortable,” said junior Atem Tazi, candidate for president with the P.L.U.G.

She said this means that “as a united student body we can get more done than a single-handed person.”

Roderick Jackson, a junior and the presidential candidate from S.E.E.D., explained that if you plant a seed something will harvest and grow — this is what he believes will come out of the S.E.E.D. ticket.

Jackson prompted the discussion on diversity on campus and said, “We are trying to create this diverse, inclusive campus that allows education to represent everyone.”

He said it does not have to mean race but “your ethnicity, where you come from, if you’re a singer, a biology major.”

Tazi’s rebuttal pointed out that in the discussion on diversity, “What we’re looking for is respect” and to see “eye-to-eye.”

The only independent candidate, Hannah Sesay, a freshman who is running for sophomore senator, also touched upon diversity, specifically the lack of diversity in faculty.

She also said she will push for a better connection with SGI and students and aims to hold events to educate students on diversity and inclusivity.

Alissa Santolo, the candidate for vice president from S.E.E.D. and a junior, urged to continue to promote hiring diverse faculty and host events for students to celebrate their cultures collectively.

“We know that diversity and inclusion on this campus has been very touchy, especially this school year…it is extremely sensitive,” Tazi said. “We must create comfortable and safe spaces for individuals for feel comfortable to voice how we feel.”

Tazi put an emphasis on accountability and wants students to have the chance to hold administration accountable.

She announced that Sun Yat Sen will now be a Center for Marginalized Students, for which she credited Students of Consciousness and the Pan-African Council.

“It’s important for the person teaching you to look like you,” Tazi said, later saying how black and brown faculty are just as worthy of University-wide recognition as white faculty.

“Retaining professors is important so they have time to improve themselves,” Santolo said. “I think a lot of this is going to come with assisting key resources in training so professors as well as students feel comfortable in their environments and professors want to stay longer.”

The discussion between the candidates for treasurer drew listening ears as Torrent Cannon of S.E.E.D. admitted he wasn’t aware “of the specifics” regarding special allocations, but touted he can “learn quickly.”

Henry Stitzel from P.L.U.G. stepped forward to confirm that all organizations can receive special allocations, to which Cannon then agreed.

The discussion of Greek life requirements, small groups and budgets arose through student polls and Noel Ball, candidate for secretary for P.L.U.G. and a junior, said, “Although it is a lot to get accreditation, there are groups with five people as there are small groups in SGI organizations.”

The tickets ended the debate stating once again their key goals and final words of persuasion to the student body to vote for their tickets.

Students can vote for the next SGI e-board on April 5 and 6 through MySju.