Students Nationwide “March For Our Lives”

Members of the SJU community show their support in Manhattan march 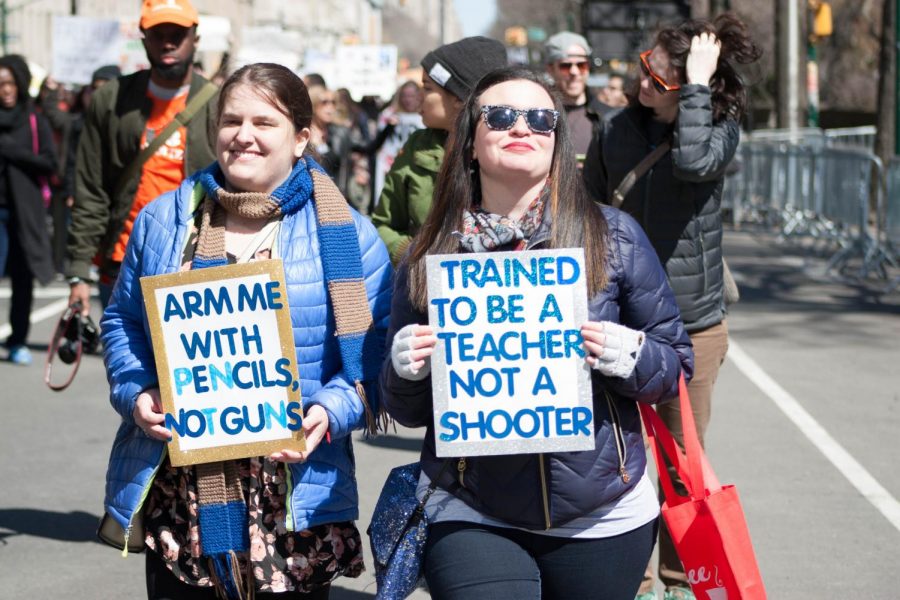 Many St. John’s students attended the March For Our Lives rally in Manhattan last Saturday, March 24.

Millions of students across the nation took to March for our Lives marches in major cities. Some St. John’s students made their way to the Manhattan march on Saturday, March 24 to advocate to end gun violence.

A typical Saturday morning for college students is spent sleeping in, but March 24 was different.

“We the students have a voice and need to come together in order to make an impact on legislations,” said Anna Evseev, a junior at St. John’s who participated in the Manhattan march.

The Manhattan march started along Central Park West and ended in Midtown. According to NBC 4 New York, tens of thousands marched in Manhattan.

Some traveled to be a part of the march in Washington which featured survivors of the Parkland school shooting.

“Seeing how packed the march was and how passionate people of all ages were was the best example of the people in this country being a united front for something that’s right,” junior Alessia Pisciotta said.

“It made me really proud to be apart of it,” she added.

March for our Lives was put together just weeks after the school shooting at Marjory Stoneman Douglas High School in Parkland, Florida where 17 students were killed.

It was one the deadliest mass school shootings since the tragedy at Sandy Hook Elementary in Newtown, Connecticut, where 26 were killed.

“The March was a great place to see ideas on gun control explored and shared,” said Hunter Rabinowitz, a junior.

Weeks prior to the march, a Facebook page was formed for students at St. John’s interested in going to the march as a group.

Labranche, a sophomore, was the one who decided to organize the group of St. John’s students.

“I stayed updated on March for Our lives since the day it started,” Labranche said. “They [March for our Lives] asked for some people to help organize their college to participate, so I volunteered to organize the St. John’s campuses.”

Labranche talked about the stress that forms while putting together important events like this one. She said, however, that her past experiences prepared her for this challenge.

“It was very stressful considering that I had responsibilities for school, my clubs and organizations, and working on a business project,” Labranche said.

The help of both Murray and Hope were paramount in making the event possible while also alleviating a lot of stress from Labranche.

“I’m more than grateful for them,” Labranche said.

Murray, a sophomore, talked about how the fight does not end after the march as gun laws have yet to be changed.

She spoke of plans to create more events on campus to promote awareness for this issue.

“We’ll probably be creating a new group of students who are interested in what’s going on post-march,” Murray said.

“We might also try to do a ‘Vote for Our Lives’ event in the future to try and get students registered to vote before November,” she added.

Murray emphasized the importance of student activism for the cause.

“I think it’s up to us to keep the energy going, by staying updated, pushing legislation in Congress and, most importantly, voting in November,” she said.