Sitting Down With President Gempesaw 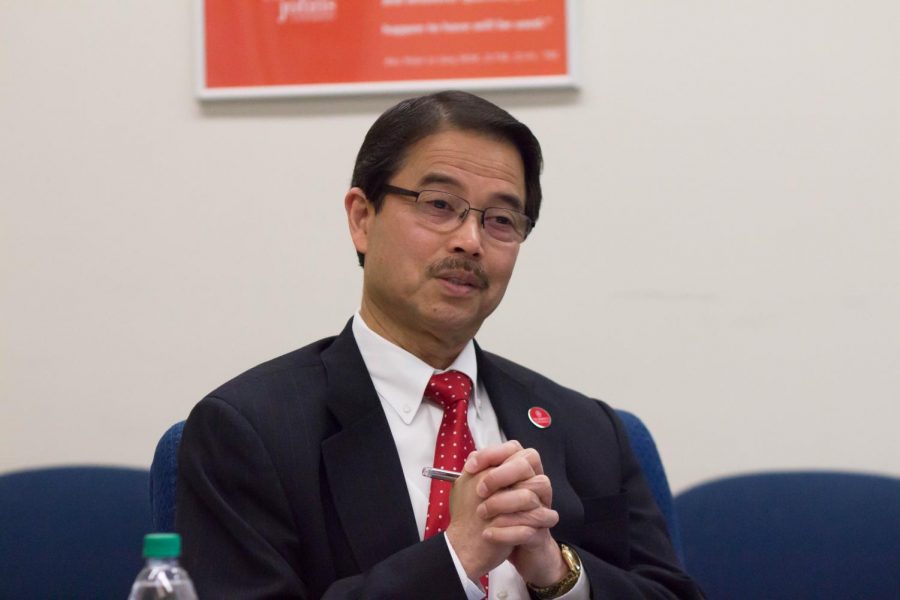 Conrado “Bobby” Gempesaw is rounding out his fourth year as president of St. John’s University. His tenure has been marked by several things, from the hiring of men’s basketball coach Chris Mullin, to an increase in retention and enrollment. He’s worked to increase fundraising, address student concerns to change the campus culture in regard to diversity (a full story on this was published in the last edition of the Torch) and to promote his four strategic priorities that focus on improving the University in four different areas. Earlier this month, he sat down for an hour long, wide-ranging interview with the Torch to discuss some of these things. Here’s what he had to say:

One issue that’s been widely discussed on campus is the question of whether there’s a “hiring freeze.” According to Gempesaw, there is no such thing happening at St. John’s.

“A hiring freeze means that we are not hiring across the board in all academic and administrative units at the University,” he said. “That’s not the case.”

What they are doing, he said, is managing budgets conservatively. Currently, he said St. John’s colleges and schools are searching for or have completed searches for 40 faculty positions —  11 are new positions.

Aside from hiring faculty, Gempesaw said the University is also working to hire additional mental health professionals and disability professionals — a move meant to address the requests of students. Students have previously said the counseling center’s services are not adequate.

“So what we have done is what I call ‘selective and disciplined hiring,’” he said.

Gempesaw said the University is 92 percent dependent on tuition and fee revenue, adding that St. John’s hasn’t totally recovered from a 12 percent decline in enrollment in 2014, meaning the school needs to budget conservatively. He also said the Excelsior Scholarship in New York State has affected the University’s ability to recruit students.

“Many schools, when they face enrollment declines…They attempt to increase revenues by increasing tuition,” he said. “We have not done that here during my time as president.”

During Gempesaw’s first year at St. John’s, tuition was frozen. He said that in the last few years, the rate of increase in tuition has been less than two percent.

“So if we are unable to increase tuition as much, we have to be disciplined in containing our costs,” he said.

Gempesaw said personnel and benefits are the University’s highest expenditures, so, “a selective hiring process is really consistent with our strategic priorities,” he said.

He also added that St. John’s has avoided laying off employees and cutting academic programs.

Fundraising at St. John’s has increased from $16 million in 2013 to $22 million in the past year, according to statistics shared with the Torch by Gempesaw.

“That is a good sign that our alumni and friends know that St. John’s is a good investment,” he said.

A huge source of funding has been alumni — which should come as no surprise. Gempesaw said he regularly travels to meet with alumni, and pointed to the grand alumni homecoming weekend as one way the University has attracted alumni back to campus and shown them the value of investing in St. John’s.

Another method through which the University has had success in fundraising is the Partners for Student Success initiative. The school’s goal is to reach $15 million in new scholarships through this initiative by 2020.

“We have gotten [a] good response to that request,” he said.

The way it works, Gempesaw said, is that alumni or others who hope to support scholarship will make a pledge. That money is then put into the University’s endowment.

“Through the Partners for Student Success Scholarship Program, generous alumni and friends can establish a permanent endowment with an outright gift of $100,000 or more, or a pledge of $100,000 or greater,” according to the St. John’s website.

Gempesaw himself and his wife have also made a personal investment in an endowed scholarship, according to Brian Browne, the director of University Relations. The amount was not disclosed.

And while there’s been clear success in raising funds for the University, Gempesaw said he’d like for St. John’s to be more successful.

“Especially in raising scholarships for our students, because it’s something that we have identified as critical to the success of many of our students,” he said.

Gempesaw made it clear that he’s a huge fan of the game of basketball, which is fitting, given St. John’s status as a Division I program. He said he played basketball throughout grade school, high school and college.

During the interview, Gempesaw expressed immense praise for former St. John’s player and current men’s basketball coach Chris Mullin — arguably his biggest hire since taking on the role of president at St. John’s. He said Mullin was hired because he has the commitment, experience and talent to lead the team.

He said he describes Mullin’s efforts as “The Three Ps.” They stand for process, patience and perseverance.

“Competing at the highest level of athletic competition requires the building of a strong foundation and that process can take time depending on where you started your base,” Gempesaw said. “Patience is also a virtue that we have to respect because we all know the process will take time.”

Additionally, he pointed to the various difficulties faced by the men’s basketball team this year.

“You can see that they never give up. They always play hard until the end,” he said.

Gempesaw admitted that he wishes SJU won all of their games, but he was adamant that Mullin “cannot do it alone.”

“He needs help from his coaching staff, the athletic department,” he said. “Coach Mullin needs help from the student body and alumni to cheer for our team so that our home games — either here at Carnesecca or Madison Square Garden — are sold out.”

He stressed the importance of student and alumni support for the team as Mullin continues to work to build up the program.

Additionally, he said he’s excited about the core players SJU will have on its roster next season, as well as new players and transfers.

When Gempesaw became president, he said he wanted to focus on four “strategic priorities.” They include: Ensuring student success; recruiting, recognizing and retaining faculty, staff and administrators; enhancing SJU’s teaching and learning environment and expanding global and community partnerships.

“We have made strides in terms of increasing our retention rates,” he said.

Under Gempesaw, student retention and graduation rates have risen. He said 2002 was the last time the University’s retention rates “started with an eight.” The 2016-17 retention rate was 83 percent.

“I do not take credit for those accomplishments — I should give credit to our colleagues here at St. John’s who have taken ownership of that very important goal,” he said. “And my expectation is that if you retain your students, you’re halfway through to graduating them.  And I know that our graduation rate will start moving three years from now, because we are now moving our retention rates.”

Throughout the last four years, he also said he’s made hiring faculty a priority, despite having a tight budget. He said the school has hired more than 150 new faculty during that time.

He also pointed to the University’s efforts to keep up with technological advances, saying it’s something he’s very proud of.

“I’m really excited because when we have visitors who come here, they say, ‘Oh, we haven’t seen this anywhere, and that gives our students that edge,’” he said.

The College of Professional Studies, for example, recently had five new labs built to supplement students’ learning experiences. Those labs include a cyber security lab, a homeland security/emergency management simulation lab, an innovation and design enhancing the arts lab, an innovation lab and a computer science lab.