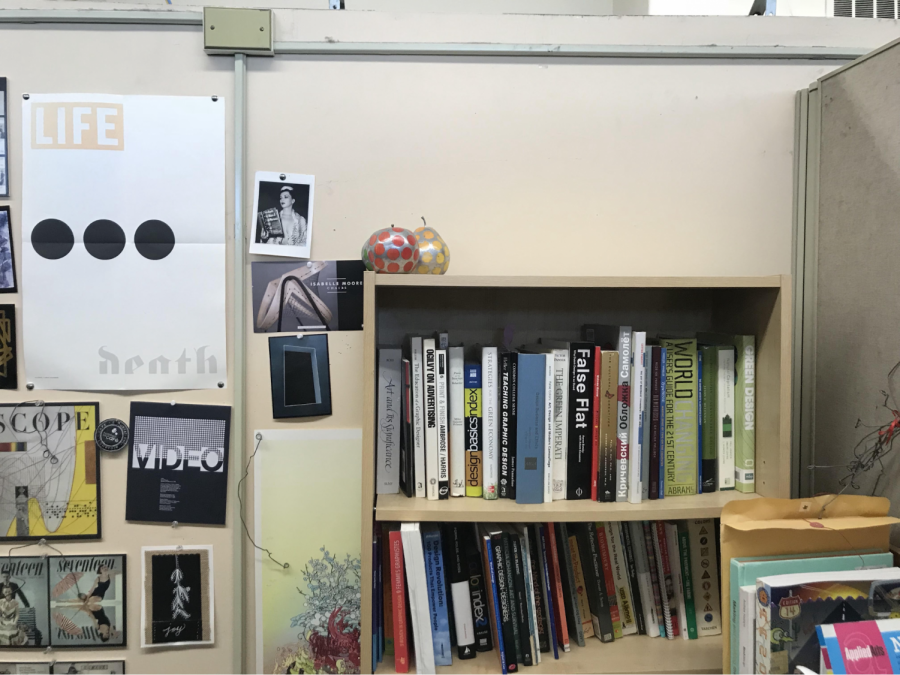 Professor Aaris Sherin’s office with the 16 books that she discovered missing on April 11 were stacked atop this bookshelf.

A string of thefts in St. John Hall has professors concerned for their valuables and personal items. According to three employees stationed in the building’s basement, the issue has carried on for years.

Aaris Sherin, a 13-year University art and design professor, said she discovered numerous copies of a book she authored were missing on April 11, just days after she brought them into her office to give to her class and present at the annual faculty book reception.

“I went to get one, and they weren’t there,” Sherin recalled in an interview. “The whole stack. Sixteen books were not there.”

She spent a few minutes trying to gather her thoughts and find the books before accepting that they were gone. She immediately told her administrator, who called Public Safety. She was referred to an officer who dealt with issues of theft.

“I would have noticed if it would have been a couple of weeks,” Sherin said. “I’m not in my office every day, so I don’t know which day [they were taken].”

As he wrote the report, the responding officer told Sherin that incidents similar to hers were not uncommon in St. John’s Hall.

“I think the thing that I found most troubling was that the Public Safety officer who came over said, ‘Yeah, this building is hot. We have a huge problem with theft in the faculty offices, especially in the wings,’ which are in this part of the building,” she said.

In a statement released by Public Safety to the Torch, the department said the case is ongoing and they are working with members of the University to prevent more thefts.

“Public Safety is investigating this matter and is coordinating with faculty on best practices in an ongoing effort to keep their belongings secure,” said Executive Director for Public Safety Denise Vencak in a statement sent on Tuesday.

Sherin said she would like more communication between faculty members based in the basement and Public Safety as part of their investigation to find the source of the theft.

She said she’s made an effort to inform her colleagues about her stolen books so they can safeguard theirs when they’re not in their offices. They all wonder who’s the culprit.

“There’s a lot of talk back and forth about whether or not it might be people who have keys,” she said. “Sometimes these doors are left open … My colleague has an office next door and sometimes she’ll text me and say, ‘are you here?’ I’ll say ‘no,’ and she’ll say, ‘well, your door is open.’”

With $850 worth of books missing from her office, Sherin said the department has reimbursed her and others who have had items stolen either with money from the Dean’s department or money from her department’s budget because there is no insurance, which she heard from the chair of the department.

But Sherin isn’t alone in the problem.

Dr. Robert Rivera, whose office is across the hall from Sherin’s, also had items taken from his office, he said. Two years ago, about 21 books were taken from his desk.

Incredibly, he successfully tracked some of the stolen books and recovered them.

He did a search on “Amazon.com: Used Books” and got a hit for one of the books that was stolen from his desk. What struck him was the description of the book.

“The description, according to the used bookseller, was that the name had been blacked out, and that it had a dedication,” Rivera said. That matches the exact condition his book was in when it was stolen.

He tracked that used bookseller to a bookstore in Manhattan. When Rivera went there, he walked around the religion section and came across six other books of his. He knew they were his because they also had his name crossed out.

He told the owner that his store was in possession of stolen books. After a brief discussion, the owner told Rivera he could take the books back home.

Like Sherin, Rivera filed a report with Public Safety, who took this complaint to the local precinct. While he said he hasn’t had anything else taken from his office since, Rivera said that there have been other instances of theft within those two years.

“It’s a systemic problem,” he said. “Colleagues have had valuable books and computers taken from their offices. There’s a measure of vulnerability in this space that it’s open-ceiling, and there’s always the potential for someone to reach over or to climb over [the partitions separating the offices].”

The books that were taken from Rivera were mainly for research and worth more than $100 each, he said.

On occasion, he has experienced suspicious activity in the hallway.

Rivera asked for his card and gave it to Public Safety for them to follow up.

When asked if he had heard anything from Public Safety after that, Rivera said, “no.”

Another issue, according to Sherin, is a lack of video surveillance by the professors’ offices. She believes the only cameras nearby are in the area by the bathrooms.

While Public Safety says it’s investigating the theft, Sherin’s loss of 16 books earlier this month still stings — and she wants answers. She added, “I think there should be more a substantive effort to figure out who is doing this and stop that.”