The announcement came after student and faculty backlash 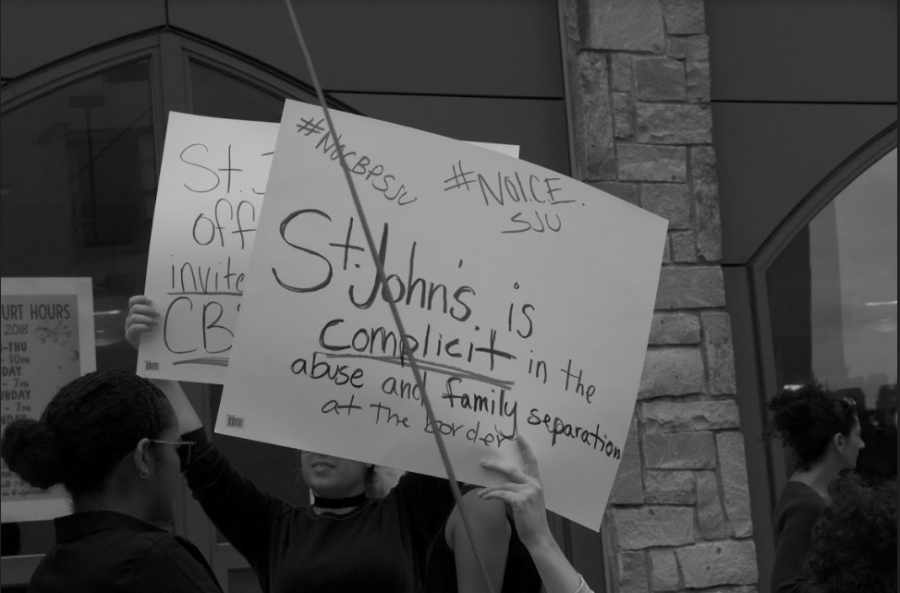 Amid an uproar on social media by some students and faculty about U.S. Immigration and Customs Enforcement’s involvement in the annual Career Fair last week, the University announced moments before the fair that ICE would no longer be present.

ICE decided not to come to campus due to “unforeseen circumstances,” according to a St. John’s spokesperson. ICE did not respond to a request for comment.

On social media student organizations had begun discussing plans for a protest at the Career Fair the night before the Sept. 20 event. A handful of students appeared at Taffner Field House with signs, even after it was learned ICE was not coming after all.

Brian Browne, a spokesperson for the school, said St. John’s understands the seriousness of the political rhetoric surrounding immigration. He said it was important to involve ICE and U.S. Customs and Border Protection — which did show — for the benefit of students looking for work in those fields.

“As we have for 148 years, St. John’s continues to embrace our founding mission to be a place for immigrants and their children to attain a quality education,” Browne said in the statement. “This mission helps to shape our values and strategic priorities.”

The announcement regarding ICE’s decision to not appear came following a night of concern and debate among multicultural student organizations over ICE’s participation in the Career Fair, which hosted more than 100 employers from around the country.

Campus organizations such as Students of Consciousness were against ICE coming to St. John’s.

“This is a clear contradiction of St. John’s ‘values,” SOC said on Twitter. “On 9/6/17 St. John’s created a program for DACA students to assist them in their particular needs. A week before the ‘Inclusivity’ Resource Center opens, this same institution plans to have ICE at its Career Fair tomorrow.”

Only a few students protested and held signs, that said, “St. John’s is complicit in the abuse of and family separation at the border,” and “St. John’s profits off diversity then invites ICE and [Border Patrol] to campus.”

While the University acknowledged the worries that many students had regarding ICE’s presence on campus, they also encouraged a dialogue to discern ways in which better consideration can be paid to issues pertaining to immigration.

“We understand the concerns expressed by some students with regard to ICE, and the request by some students not to allow their participation in the University’s Career Fair,” Browne said in the statement. “These concerns are important to us and we consider them as we move towards our commitment to the strategic priority to ensure student success.”

Tensions grew over the summer when ICE —  a group that focuses on enforcing border patrol, customs, trade and immigration laws to promote public safety — and President Trump’s administration enforced tougher rules on immigrant families. Images of families with children being separated at the border and domestically created a stir.

A recent case from Queens involved Pablo Villavicencio, a pizza delivery man who was detained by ICE after delivering food to an Army base in Brooklyn.

According to the Queens Chronicle, Villavicencio, an undocumented Ecuadorian immigrant who worked at a College Point pizzeria, was unable to present a valid driver’s license, and a background check revealed an active deportation warrant.

Villavicencio was separated from his wife and two young daughters while being held by ICE at a detention center in New Jersey. He was eventually granted a stay by a judge and reunited with his family.

One student who attended the Career Fair, who spoke to the Torch on the condition of anonymity due to fear of retribution, said she understood the concern that students had regarding ICE coming to campus.

But she thought ICE coming to campus could have been a positive development. Perhaps, she said, students from a diverse campus could have landed employment with ICE, giving them a potential platform to change the agency.

“I don’t think that they are going to abolish [ICE],” the student continued. “I think the best way to enact change is for them to go ahead and get jobs with ICE and try to change it from the inside, because that’s the best way to go about it.”

The student, a junior, said that one of her friends is a homeland security major who was disappointed that ICE did not show up to the Career Fair, and that many other students probably lost an opportunity to build connections.

In its statement, the University attempted to relate to students who found themselves in similar situations, especially those whose studies focus in areas of criminal justice.

“For students in these majors, this may involve employment by several federal agencies including U.S. Immigration and Customs Enforcement,” the statement read. “It would not serve our priority of ensuring student success if we inhibit the ability of these students to pursue relevant career opportunities. Students studying at St. John’s today may someday become a force for meaningful and comprehensive immigration reform within ICE.”

Hunter Seldon, a sophomore who also attended the event, emerged from the crowd at Taffner Field House wearing all black. Her wardrobe choice was one she purposefully chose in order to protest, which some students did in front of the building.

Seldon said that the University’s decision to invite ICE to campus in the first place goes against what it stands for, especially one that promotes diversity and is open to students of a wide range of ethnic backgrounds.

“When I heard they were coming, I was upset,” Seldon said. “For a school that promotes diversity and being open to everybody…it was just like a slap in the face. What do we really stand for at this school? I didn’t like it.”

When asked if St. John’s should continue to invite groups such as ICE and U.S. Customs and Border Protection to campus for further events, she responded sharply and disapproved of the idea. “Not at all,” she said.

In speaking of the global and culturally diverse mission that the school prides itself and was founded on, the statement released by the University mentioned how it strives to achieve academic excellence from students of all backgrounds.

“Our commitment to student success embraces our students across all majors and includes ensuring professional opportunities in their respective fields of study,” the University said. “We support efforts to voice concerns about ICE policies and practices, and we are willing to discuss ways that we may partner with our students to be able to bring greater attention and education to these issues.”

Jeremy V. Cruz, an assistant professor of theology and religious studies, posted on Twitter that he was “praying over our obligations to one another…as humans, U.S. co-residents” and members of the St. John’s community.

He also linked a statement from Leaders in Catholic Higher Education, one that St. John’s President Conrado “Bobby” Gempesaw signed onto.

It opens with how students from diverse economic and ethnic backgrounds and those “on society’s margins” are welcomed, while restating that the legacy will carry on for years to come.

“These students have met the criteria of the Deferred Action for Childhood Arrivals (DACA) policy, issued in 2012,” the letter said. “We, the undersigned presidents of Catholic colleges and universities, express hope that the students in our communities who have qualified for DACA are able to continue their studies without interruption and that many more students in their situation will be welcome to contribute their talents to our campuses.”

The anonymous student, who said that she understood why students were upset but wished that ICE could have attended the Career Fair, ended by saying that there is more that can be done to bring about positive change to ICE and its priorities.

“I just think that’s the best way to do it, try to change it from the inside,” she said. “I don’t think trying to get rid of it or stop them from coming to school is going to get the changes they want.”