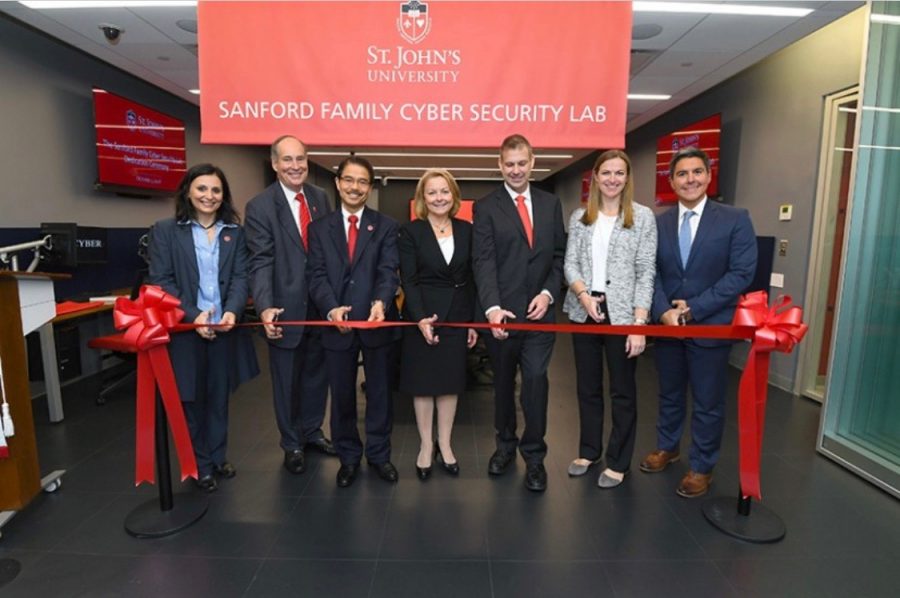 The digital age of today is one that relies on the Internet to provide a constant flow of information, drive commerce and protect the foundation of society that witholds our personal information.

Breaches of personal data and the loss of private information have become common occurrences.

As the digital culture has spread, so  has the potential for cyber crime. St. John’s University has been on the frontlines in educating a new generation of students to combat this new threat with its Bachelor of Science program in cyber security systems and the new Sanford Family Cyber Security Lab.

On Oct. 3, St. John’s officially dedicated the lab, which is located in St. Augustine Hall.

The lab was named after the family of Linda S. Sanford, 74’ Ed, 98’ HON and former senior vice president and group executive of IBM Storage Systems Group.

After a blessing from Rev. Bernard M. Tracey, C.M. to open the ceremony, a ribbon cutting ceremony was held to recognize the lab’s official dedication.

In attendance were Sanford and her family, President Conrado “Bobby” Gempesaw and Katia Passerini, Dean of the College of Professional Studies.

She also received an honorary Doctor of Commercial Science degree from St. John’s 20 years ago and is a member of both the Women in Technology Hall of Fame and the National Academy of Engineering.

“I would not have had the exciting career and life that I have had without being here at St. John’s,” Sanford said.  “It was natural for me to support this wonderful program that has been created here. The laboratory is beautiful. We have a great leader in Dr. Passerini, who has brought a whole new vision around this. What I love is that it is not just about the technical, scientific and mathematical aspects — it is about how you solve real-world problems. That has been one of the hallmarks of St. John’s. I have no doubt that you are all going to continue to be leaders, especially in this field.”

Students who use the lab were impressed with the new additions, saying it would allow them to do more in their fields.

Anish Bashu, a cyber security systems and the co-founder of the St. John’s Cyber Security Club, said the development of the school’s cyber security initiatives exceeded his expectations of what he remembers coming into the program.

Now a graduate assistant, Bashu recalls when students were pressed for time due to a lack of technology and a physical setting to complete work.

“I never thought my involvement in the cyber security program would have grown to what it is today,” Bashu said, according to the University’s website. “Back when I started, we had to bring in our own laptops and equipment to do these hands-on exercises, and setup time was considerable.”

Bashu thanked Sanford and the College of Professional Studies for recognizing that the program was “no longer a club, but a diverse community of cyber security students and alumni who use this lab every week to hone their skills in training sessions run by students for students.”