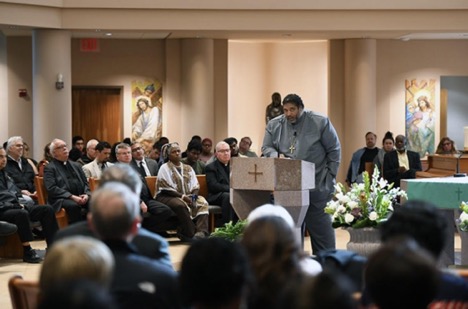 What was supposed to be Rev. Dr. William J. Barber II’s second address Thursday as part of his “It’s About Right and Wrong” lecture series has been called off due to Barber tending to an immediate family member he described as “very ill” in an email sent to the Torch on Wednesday, Dec. 5 at 5:46 p.m.

On Tuesday, Rev. Patrick Griffin, C.M. said that Barber would not be in attendance due to his own illness. In the email sent to the Torch, Barber clarified that while he is also dealing with a bad virus, the situation with his family member “requires my attention.”

The event was still listed on the University calendar online Tuesday night before being changed Wednesday morning.

In an internal email sent to the St. John’s University community on Wednesday, Dec. 5 at 2:30 p.m., Griffin wrote that, “Bishop Barber has a medical issue that makes it impossible for him to travel at this time. He apologizes for the inconvenience. We will keep you informed as the situation changes.”

Barber is a progressive Protestant minister and the President and Senior Lecturer of Repairers of the Breach.

He is also Co-Chair of the Poor People’s Campaign: A National Call for Moral Revival and accepted the role of 2018-2019 Vincentian Chair of Social Justice at St. John’s for the academic year.

“The position of a ‘Chair’ can be filled each year depending on resources and candidates,” Griffin said. “The appointment of the Chair happens through the Executive Vice President for Mission at St. John’s. That is Fr. Bernard Tracey, C.M. The position is maintained through the Vincentian Center for Church and Society which is part of the Mission area.”

Those who hold the position are expected to deliver four lectures, Griffin said. Barber’s second would have been Thursday night.

In his second talk, Barber planned to address November’s historic midterm elections in a discussion entitled “Reading the Signs of the Times: What Does the November Election Say about America?”

The Torch attempted to reach Barber for comment on this story, but a St. John’s spokesperson said last month he was unavailable due to scheduling issues.

In late October, Barber began his lecture series by offering a speech that was described as “a moral critique of the country.”

Advocating for social change, Barber said that America “has always had a hard time with living up to who she says she is on paper,” according to a video of his speech on YouTube.

“We need to have some moral articulation and dissent, because our deepest faith and our Constitutional tradition have been hijacked to serve greed, racism, and lies,” Barber said. “We must raise our voices. Silence is not an option.”

Barber has served as President of the North Carolina State Conference of the National Association for the Advancement of Colored People since 2005, according to the group’s website. “I had seen Bishop Barber numerous times on television before he was asked to be Chair,” Griffin said. “This was most true during the celebration of the 50th anniversary of the death of Rev. Dr. Martin Luther King. Bishop Barber may be seen to assume Dr. King’s mantle as he works to re-establish the ‘Poor People’s Campaign.’ My hope is that he will inspire our University community around issues of justice as they touch the people of our country.”

Barber, who is also the pastor of Greenleaf Christian Church, Disciples of Christ in Goldsboro, N.C., will receive $625,000 over five years as a recipient of the MacArthur Foundation “Genius Grant,” according to Yahoo. He, along with the other 24 recipients, can use the money as they desire.

During his appearance in October, Barber previewed what he planned to address in his second trip to St. John’s.

In speaking of the 2016 presidential election, Barber, a registered independent who said he “serves a God who is neither democrat or republican,” questioned whether sworn political leaders make decisions for the greater good of the people or for themselves.

“What saddens me [about the 2016 presidential election] is not that Hillary [Clinton] didn’t win and not even that [President Donald] Trump won, but the immoral factors that decided the election and said something about America,” Barber said. “And uncovered realities and fights that my momma and daddy were fighting when I was born 55 years ago.”

As of press time Tuesday, a possible reschedule date had not been announced. His Spring appearances are slated for Feb. 6 and March 21, according to Griffin.

Editor’s Note: A previous version of this story incorrectly reported the reason of Barber’s absence as being due to his own illness, which was first reported to the Torch by Griffin. This story has been updated as of Wednesday, Dec. 5 at 7 p.m.