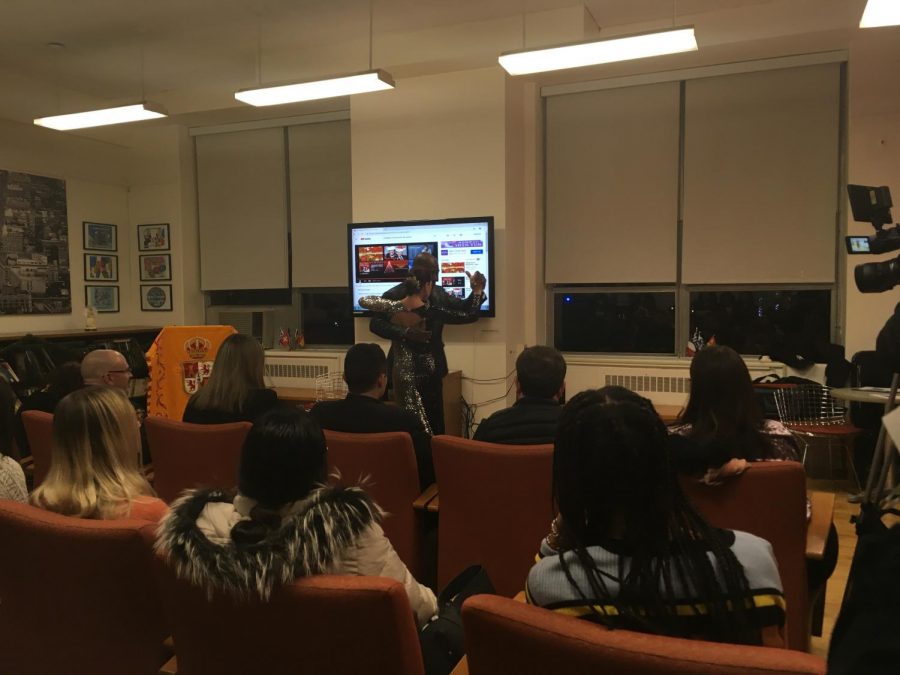 On Dec. 5, students crowded outside the small doorway into St. John’s Hall’s Global Language and Learning Center, commonly known as the GLLC. As heads craned forward to find the origin of the music echoing down the hall, two female dancers, clad in black and red, flicked both their wrists and their fans in the Center’s lobby – sharp punctuation marks on their flamenco dance.

One round of applause later and they moved to the side to join the audience. The makeshift stage was then assumed by a woman draped in a sparkling silver dress and a man in a sharp suit. The two began to dance the tango and a variation of the Milonga, an early Spanish folk dance, as more seats were brought in from next door to allow for more students to sit.

The GLLC hosted the Christmas party of Epsilon Kappa, St. John’s Chapter of Sigma Delta Pi, the National Hispanic Honor Society, early this December. All were welcome, even those not in Epsilon Kappa, and if asked a large portion of the students lined up outside the halls had attended on the recommendation of the Chapter Moderator, Dr. Marie-Lise Gazarian.

After the dances ended and the people settled, Mark P. del Mastro, Executive Director of Sigma Delta Pi, recounted his journey rediscovering the history of Sigma Delta Pi and, on a more personal note for St. John’s students, Epsilon Kappa and Gazarian.

Founded on April 17, 1964, Epsilon Kappa was founded as Chapter 130, an early contribution to the expansion of Sigma Delta Pi. Gazarian’s contributions received a special spotlight, a fact that she was seemingly unaware would occur that night. As found in the National Archives of Sigma Delta Pi, Gazarian was a poet in the society’s magazine 1988 edition of “Entre Nosotros.” By the October 1989 edition, she was being celebrated as the elected Vice President of Sigma Delta Pi, a position in which she served for 30 years.

“I don’t know where you found all of those pictures,” Gazarian said in reference to del Mastro’s presentation and agreed to help trace the history back further – as long as it was not in front of the audience.

Later in the evening, Gazarian sat down with the second guest, best-selling Spanish author Vanessa Montfort to talk about literature, culture and her recent book “Mujeres Que Compran Flores.” The interview, conducted in Spanish, touched on topics ranging from Charles Dickens, what currently defines Montfort as a writer and her desire to tell stories that include independent women.

“I think the event was really popular and I think it was really unexpected on all fronts. It was really informative to have the executive director of the honor society be there and speak on how St. John’s is doing an excellent job at portraying the mission of the honor society,” senior Government and Politics and French major Devon Koban said. “Then bringing along Vanessa Manfort, the author, it really pushed the message overall.”

Epsilon Kappa has been a celebrated chapter for a period of time, earning the distinction of Honor Chapter for 17 different years since 1995. The Chapter has also been awarded the “Premio Ignacio y Sophie Galbis” in 2000-2001, the “Premio Octavio Paz” in 2006-2007 and the “Premio Frida Kahlo” in 2017. This recent Christmas party serves as another example of the chapter’s accomplishments in spreading Hispanic culture, in all of its many forms, to all.