St. John’s hosted Recep Tayyip Erdogan during a visit in 2004 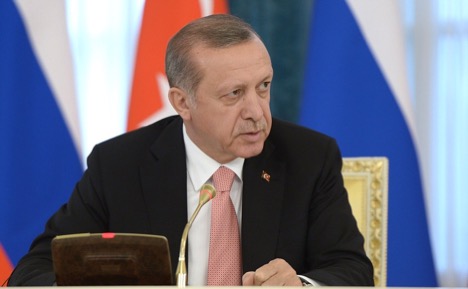 Fifteen years later, Erdoğan, now the president of Turkey, finds himself immersed in controversy after years of what some deem harsh punishments and life-threatening rulings sent down on those who criticize him.

Dressed in full academic regalia during the third day of his five-day diplomatic visit to the United States, Erdoğan addressed the crowd in Marillac Auditorium through a translator, according to a Torch article published in January of the same year.

Addressing the similarities between the University’s educational ideals and the willingness of Turkish culture to invite change “based on a rationalism that does not reject the spirituality of life,” Erdoğan said that one’s culture cannot claim a monopoly on certain principles, such as dominance on law, human rights and treating men and women as equals.

Even as he attempts to change the Turkish ruling system through “civil politics,” as he told supporters during a rally nearly two years ago, according to BBC News, many citizens of the country have referred to the president of five years as a dictator and autocrat.

In a statement to the Torch, University spokesperson Brian Browne said that the University does review past honorees under certain circumstances.

So far, there has been no review of this case.

“Honorary degrees are approved, in advance, by the Board of Trustees,” Browne said. “When appropriate, the University does have a process to review past honors. To date, the University has not undertaken such a review in regard to Turkish President Erdoğan.”

One person who has been impacted by Erdoğan’s actions is New York Knicks center Enes Kanter.

A native of Turkey whose brother Kerem played a year of college basketball for the Xavier Musketeers. He believes he has been targeted by Erdoğan and the Turkish government.

Kanter has been outspoken of Erdoğan for several years.

As recently as January when the Knicks traveled to London to play the Washington Wizards, Kanter refused to make the trip, saying, “there’s a chance I could get killed out there,” according to the Associated Press.

He fears that the Turkish government could assassinate him if he leaves the country.

“Sadly, I’m not going [to London] because of that freaking lunatic, the Turkish president,” Kanter said. “It’s pretty sad that all the stuff affects my career and basketball, because I want to be out there and help my team win. But just because of the one lunatic guy, one maniac, one dictator, I can’t even go out there and do my job. It’s pretty sad.”

“Such outreach, such commitment to world peace clearly are qualities which we as a university highly respect and applaud,” Harrington said during his remarks.

Kanter’s father, Dr. Mehmet Kanter, was sentenced to 15 years in prison in 2018 by Turkish the government for alleged membership in a Turkish terror group.

Kanter believes the government targeted his father because of the beliefs his son expresses.

“People often ask me why I continue to speak out if it’s hurting my family,” Kanter wrote in a column for TIME magazine last year. “But that’s exactly why I speak out. The people Erdogan is targeting are my family, my friends, my neighbors, my classmates. I need to speak out, or my country will suffer in silence.”

In 2004, Father Donald Harrington, who served as president of St. John’s for 24 years, praised Erdoğan’s political track record and his efforts to restore diplomacy in Turkey up until his U.S. visit.

Days after Erdoğan’s visit to St. John’s, former President George W. Bush welcomed him to the White House for an opportunity to “deepen our strategic partnership with our NATO ally, Turkey, on counterterrorism, Transatlantic relations, Iraq, Afghanistan, Cyprus, Eurasia, the Greater Middle East, and economics and trade,” according to a press release from the White House.

The meeting took place a few months before Turkey was set to host June’s NATO Summit.

Erdoğan’s leadership was recognized and acknowledged worldwide several years ago by one of America’s mt prominent media outlets.

The magazine called him a “survivor” who made ends meet in Istanbul.

“He has become openly critical of Israel despite ties between the two nations, has urged dealings with Hamas and opposes U.S. calls for sanctions on Iran,” the magazine also said.

In 2002, a group led by Erdoğan known as the Justice and Development Party won enough seats in November of that year to earn an absolute majority in Turkey’s 550-seat parliament, according to Britannica.

The decision came four years after he was arrested and served a four-year term for inciting religious hatred, according to BBC News.

Despite being legally prohibited from serving in parliament or as prime minister because of the conviction, the party named Erdoğan its leader in 2003.

A constitutional amendment passed the year before removed his disqualification and allowed him to assume the role.

According to the 2004 Torch article, St. John’s had also awarded honorary degrees to former Egyptian President Honsi Mubarak and Italian President Azeglio Ciampi before awarding Erdoğan with his.

Even though Erdoğan was not honored at the undergraduate commencement ceremony at the end of the acedemic year and did not deliver a  typical commencement speech, his honor is not discredited or limited, according to Browne.

His degree is still referred to as an honorary degree.