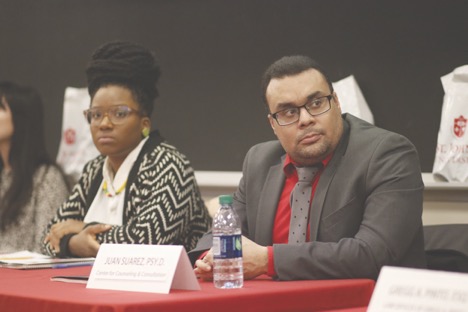 Dr. Schekeva Hall and Juan Suarez were among the panelists at last week’s talk.

A panel discussion organized by faculty and students regarding the resources available to St. John’s students who are and have been victims of sexual assault on Tuesday, Feb. 12 in the D’Angelo Center, making it the first public event for students after many current and previous members of the SJU community shared their experiences on the Twitter hashtag #SurvivingSJU in the beginning of January.

Both Monique Jernigan, executive director for the Multicultural Affairs Office and director of the Inclusivity Resource Center, and Ebony Calvin, director of Campus Affairs, stepped in to help the group of students put together the event titled “Let’s Talk About It: Sexual Assault and Consent on Campus.”

“The goal of this panel is to inform students about the steps they can take if they ever find themselves in a situation,” Calvin said before the discussion took place. This event was in response to the hashtag #SurvivingSJU, where current students and alumni shared their experiences of sexual assault at St. John’s.

The panel consisted of six people, some of whom are directly involved with the university and others who were there to inform students of the external resources available outside of campus.

One of the St. John’s representatives included Keaton Wong, the Title IX coordinator at St. John’s, who explained the different steps that can be taken by students who are victims of sexual assault.

She stressed that victims have a multitude of options here on campus in regard to reporting assault, and they should not feel pressured to go a certain route.

One of the other representatives from campus was Dr. Juan Suarez, a member of the Counseling Department.

He informed the crowd that the Counseling Department has implemented a new policy regarding victims of sexual assault. “The counseling service will now see students who experienced any type of sexual assault until they graduate,” Suarez said.

The policy used to be set up in a way where victims would only be able to go to counseling for one semester throughout their four years as students.

One of the representatives for external resources was Serena Curry, a policy and training coordinator at Mayor Bill de Blasio’ office. She informed the audience of Family Justice Centers, which help victims of gender based violence. There is a center in each of five boroughs, with the center in Queens being located in Kew Gardens.

She also told the crowd that if they are a student at any university and feel as if their school did not handle their case correctly, they could go through the Department of Education and contact the Office of Civil Rights to seek further action.

Throughout the discussion the audience had the opportunity to text in any questions or concerns to an anonymous poll.

Toward the end of the event, senior Wyett Woodburry read these questions to the panelists. Depending on their field of expertise ,they would answer to the best of their ability.

This was the first event to take place on campus in response to the hashtag that surfaced this past winter break, but it certainly will not be the last according to Monique Jernigan. “This is just the beginning not the end of this conversation.”