Students and guests filled the church to hear Amy Williams 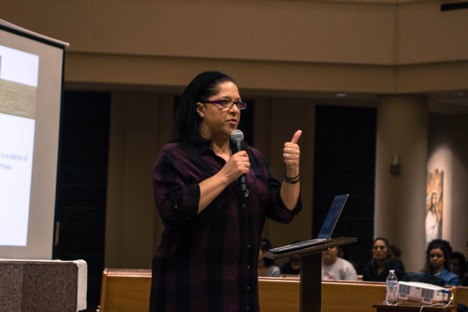 The event, hosted in part by St. John’s Black Student Union, began when student organizers of Students of Consciousness opened by “pouring libations,” a tradition in which ancestors are honored. The lecture that ensued was one Williams warned would leave the students and faculty present uncomfortable and hopefully mad.

Williams’ lecture focused on the criminal in the American Justice System. The bright PowerPoint slides projected onto a screen in the center of the church portrayed statistics about the nature of America’s inmate population and how it correlates with high school dropout rates.

First, Williams discussed the school to prison pipeline system in depth and how it targets black youth, in particular the black LGBTQ community which Williams noted is the “fastest growing group of incarcerated youth.” Williams stated that this is because “we criminalize what we fear” and prioritize “incarceration over education.”

The lecture then moved in the direction of America’s political history and more specifically how some of the presidents of the last three decades, from Reagan to Clinton to George W. Bush, have shaped legislation around education, small crime and drug and gun possession to the detriment of targeted at-risk youth in particular.

Alternative methods of justice such as classroom peace circles and family therapy were explained.

“Nineteen-hundred juvenile detention centers but guess what, only 30 percent of these facilities have a faith based organization going to visit these kids,” she said. “Kids that are in facilities that go to a bible study have a fifty percent chance of staying out and never coming back.”

William’s lecture concluded with an appeal to religion. She urged audience members to increase awareness about the imminent issues in our justice system and to help in ways they can through advocacy and by thinking twice before shopping at stores that profit from prison labor.

The event then opened up to student discussion and became a safe space for members of the audience to share their impressions and opinions as well as to ask questions.

Sophomore Noah Bagdonas found the event informative. “It’s crazy to think about how our criminal justice system is rapidly changing each and every day,” Bagdonas said.

“What was mind boggling for me was how so many kids who dropout of high school have a higher risk of going to jail,” he continued. “We can’t keep making assumptions anymore and have to think twice before acting.”