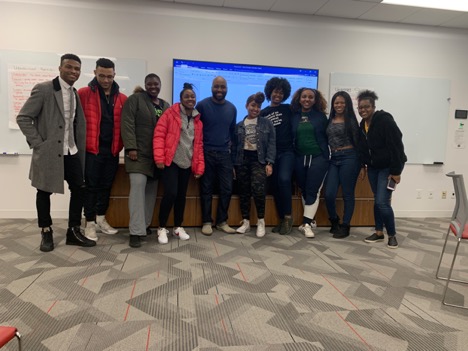 Students organizing is common to many college campuses across the nation, and that includes St. John’s. In light of students using their own platforms to share a message, the St. John’s chapter of the National Association for the Advancement of Colored People (NAACP) held an organizing workshop for students that are passionate about addressing the issues impacting them and the campus at the Inclusivity and Resource Center on Thursday, Feb. 14.
Led by activist and third grade educator Zellie Imani, students engaged in a dialogue to think critically about how to create change through the work of organizing.
In addition to teaching elementary school students, he tries to travel nationally to empower people across the nation.
“I take the time out to try to travel nationally to give workshops and speeches to young black and brown students to inspire them and give them the tools in order to empower themselves and change any of the issues that they have on campus,” Imani said.
In a series of small groups and different exercises, various students were able to brainstorm and share possible ways to seek restorative justice.
While many of the scenarios that students analyzed were derived from current real life events, they were able to bridge the conversations into issues affecting St. John’s students on campus.
Like many students who are passionate about civic engagement, Baltimore native and the NAACP president Tamia Morris has seen the triumphs and shortcomings of student led organizing efforts and explained why it is important to have these types of workshops on campus.
“I thought that in the wake of everything that happened in the previous year with the protesting we had to try over and over again to find a successful plan of action,” Morris said. “I thought that it was a good idea to bring an outside source to help us do this and I think he did.”
Throughout the presentation students raised concerns about how to negotiate their demands and the necessary elements for organizing around specific issues that are addressed in relation to the larger issues at hand.
Imani also shared his own experience with demonstrations after being a witness of the climate at the front lines in Ferguson in the Summer of 2016.
While students were captivated by the details he recounted from that day, they also got to hear about his experience as an organizer and learn how to build movement around an issue.
“Some of the main things that stood out to me was that you have to start low and gain the momentum,” junior Jalisa Smith said. “Sometimes agitation is needed, and it takes making the smaller move to realize how we need to get to the bigger picture.”
One of the many issues that student organizers are trying to address is the policy surrounding on-campus demonstrations. It is still unclear how this will affect future protests in response to injustices within the St. John’s commun