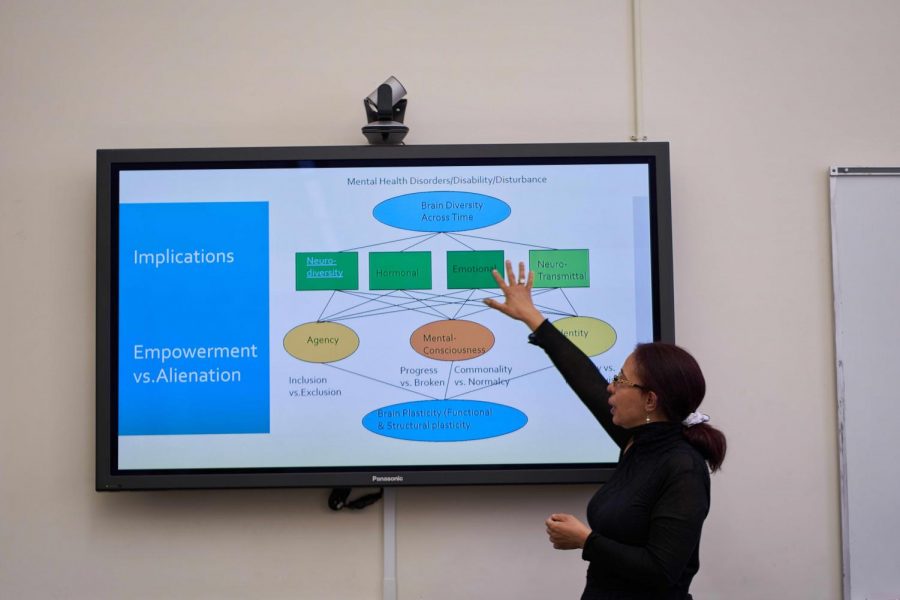 Dr. Sanae Elmoudden showed off her mental health research to faculty and students.

If a person meets someone with cancer, they ask about the healing process and praise their progress towards wellness, but they view people with mental illnesses as broken, Elmoudden said.

This hourly difference and case-by-case difference is important to understand about mental illness, Elmoudden stressed. She used depression as an example, saying each person is affected by depression differently.

Any person can be affected by mental illness, but Elmoudden said most people still talk about it quietly or not at all.

“They lower their voice as if this is something that needs to be shamed all the time,” Elmoudden said.

Mental illness can affect people of all backgrounds, religions, ethnicities, races and cultures and Elmoudden’s research explains why intersectionality should become a part of the conversation. The intersections of different oppressions like race, sexuality and religion also interact with the stigma mental illness brings, she said.

“For instance I am black, and I also happen to be a Muslim so I am at the intersection of black and Muslim,” Elmoudden said.

These interactions cause mental illness to be looked at differently across cultures. Mental illness in the Muslim community is more stigmatized than in other communities for example, she  said.

Elmoudden emphasized using terms like “brain diversity” to remove the stigma from mental illness discussions. She said the term “neurodiversity” is already used in the autism field and believes all mental illnesses should be talked about this way.

She presented a chart showing a timeline of different categories of mental illness, neuro-diversity, hormonal, emotional and neuro-transmittal, and how they connect to identity, agency and mental-consciousness.

The stigma around mental illness is at the center of Elmoudden’s research. Her research attempts to provide a vocabulary normalizing mental illness. People should be aware of mental illness, not blind to it, she said.