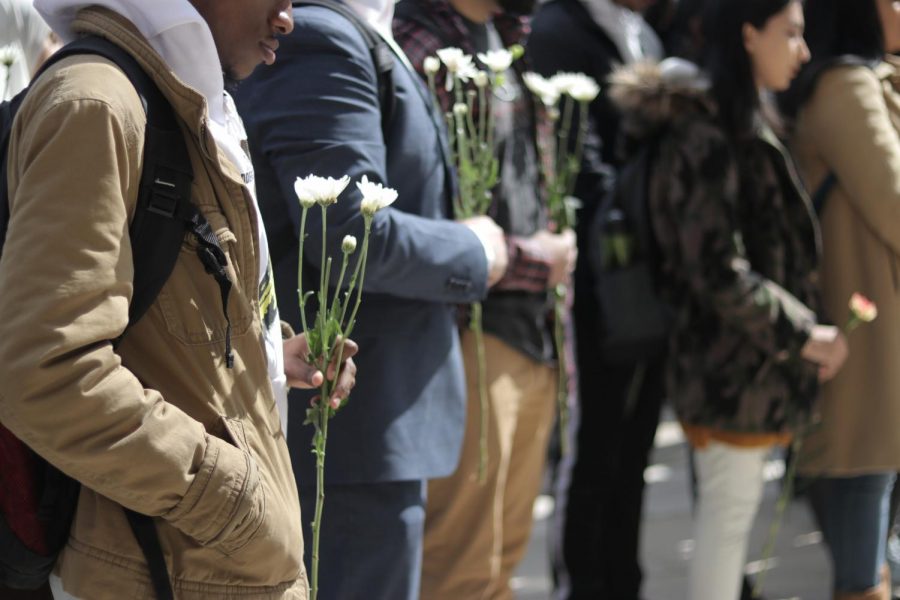 The Muslim Students Association held a vigil, led by President Mohammed Wasi and VP Umar Syed, in front of DAC on Monday in remembrance of the 50 killed in New Zealand.

About 40 students and faculty gathered at the D’Angelo Center Plaza on Monday, March 18 for a vigil organized by the Muslim Students Association (MSA) to remember the 50 victims of two mass shootings in Christchurch, New Zealand.

The two shootings, which took place at two separate mosques on Friday, March 15, made for the deadliest mass shooting in New Zealand’s history, according to the Washington Post. CNN also reported that 34 victims remain hospitalized and 12 are in critical condition.

MSA led about 30 students from St. John Hall to DAC and distributed flowers to those in attendance before the vigil began, with a prayer from MSA Vice President, Umar Syed.

Behind Syed was a poster collage with the names and photos of the victims of the attack on display, above a basket of flowers and messages of empathy from students.

The attack was done by a lone shooter and took place on Friday, March 15 at the Al Noor Mosque and the Linwood Islamic Centre in Christchurch, during Friday Prayer.

Sophomore events planner for MSA, Aleeshah Zahid said she was “shocked” to hear the news.

“I was definitely shocked, just because it’s like something that was unexpected,” Zahid said. “You would never think that someone is going to pray and then they get shot there. That’s supposed to be a safe space, especially for Muslims.”

E-board members leaned on one another for support as they recited names and stories of the victims. MSA President Mohammed Wasi wanted the crowd gathered at the vigil to remember those who died as more than just what happened to them.

“My first thing was definitely doing it the right way and doing justice by the victims,” Wasi said. “It’s important to know the victims by name and by their stories, not just by a number. If you hear [50] Muslims died in New Zealand, yeah it’s big, but it’s a number and you don’t know who those victims were, you don’t know their lives, their stories.”

“There are a lot of people in our group that wear hijab, that are outright and you can tell they’re Muslim,” Imlak said. “So I think for people like them it’s really important for them to feel like they have a home outside of their home.”

He added that it’s important for the community to feel safe.

“We have a prayer room where they can pray, we have events that we hold where everyone can talk about their own feelings,” Imlak said. “I think we do need a space where we’re able to talk about the kind of experiences that we have and know that there are other people in our community that have the same experiences, and that we’re not alone.”

Wasi said the support from Campus Ministry, Multicultural Affairs, club advisors and other religious organizations on campus is empowering, making him feel safe.

“Outside of campus, it doesn’t always feel safe you know,” Wasi said.

The collage and flowers will remain in the DAC living room until Friday, where students can leave their messages of support for the victims.