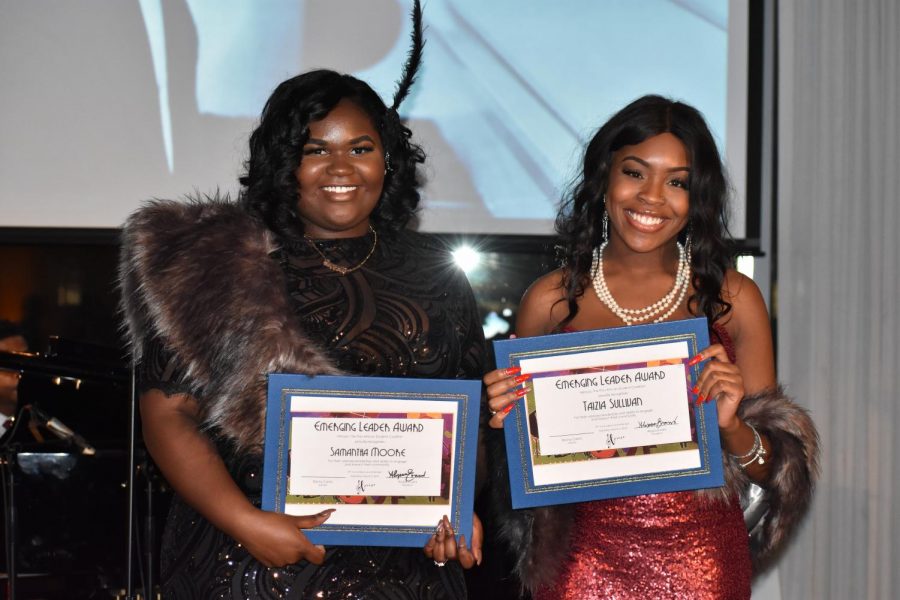 Savannah Moore and Taizia Sullivan were given the Emerging Leader Award at Haraya’s B&W Ball.

From Ella Fitzgerald to Langston Hughes, the Harlem Renaissance was a movement that embraced the reality of black life in America. During the 1920s, an intellectual, social and artistic explosion of black creatives offered new and unique perspectives on the black experience.

The theme for this year’s annual Black and White Ball was an act of homage to this significant period of American History. On March 2 “Haraya’s Playhouse”  transformed the way this event has been hosted in comparison to previous years. Students were no longer subjected to wearing shades of white like cream or black, with slight hints of color. This year’s theme was  not only was a nod to the renaissance of 1920s Harlem, it was also a way to acknowledge a new wave of black creativity and excellence.

While this annual event signifies the end  of Black History Month activities on campus, it also gave students and faculty the opportunity to come together and celebrate their achievements.

With an emphasis on excellence, this event was curated to create a  sentiment of the Harlem Renaissance.

“I feel like this year was important to me especially,” Dionté Williams, vice president of activities for Haraya, said. “The world has been showing how they truly feel about black culture and people. Every day I want to communicate and express our power, our excellence, our love, our strength and our intelligence. When I was tasked with spearheading Black and White Ball, I just knew that I wanted to pay homage to everyone before us.”

Every element of the renaissance was tailored to the event. From the elegant fruit display to the bustling “mocktail” hour to the thoughtfully cultivated visual presentation of black art and historical figures, the fourth floor of the D’Angelo Center was transformed into an immersive experience for all of its attendees.

Students were encouraged to reflect the Harlem Renaissance theme through  their formal attire as well.

This was a unique phenomenon of this year’s Black and White Ball because attendees were able to really capture the nights essence in their looks.

“I like the themed aspect of the ball,” senior Wyett Woodbury said. “I like that it’s different and people are able to express themselves through fashion. I appreciate the theme for what it was, and it surrounds Black History. I feel like the theme captured black culture and for those that participated in it I feel like it was spot on and they did what they had to do to really show what black culture is and was past and present.”

Many upperclassmen who have attended the Black and White Ball in previous years noticed how this year’s theme stood out from the previous ones. Senior Obono Mba-Madja attended last year’s ball and appreciated the way this year’s theme captured the significance of black success.

“I think it was very fitting to have a Harlem Renaissance theme. Within the past year I feel like black people all over the world have made certain trademarks and broken barriers that we have never seen. We celebrate black excellence all the time, but the Harlem Renaissance was the birthing of all that in the U.S.”

Other students took note of the difference in decoration from last year’s ball to this year. Many could see the shift this theme had on the overall ambiance of the ball.

“The difference I noticed off bat was the decoration,” senior Sieta Leon, who is also the president of the Latin American Student Association, said. “They took the theme and ran with it this year and did a great job embodying the Harlem Renaissance with the music and the centerpieces. I also think keeping it open to wearing any color you want and giving us a theme to experiment with gave people the opportunity to get creative.”

For the years to come, Haraya’s new venture has the potential to spark a renaissance of its own within the St. John’s community. Not only is black excellence being celebrated throughout the world, people are continuing to educate and cultivate new and captivating ways to express their stories. Like the Harlem Renaissance, this year’s ball was a reminder of the ways in which black people continue to create and push the boundaries of popular culture.