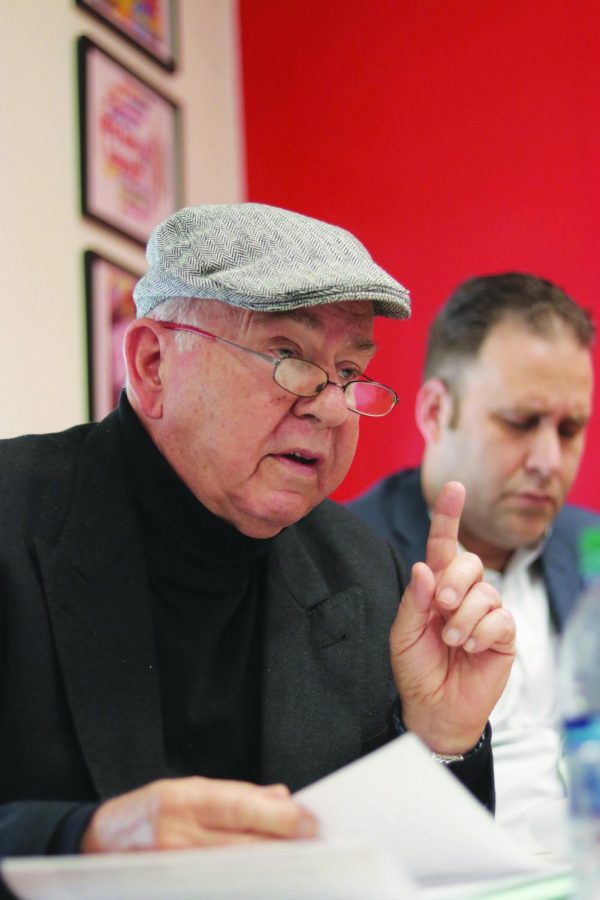 Miguel Barnet, left, and Luis Morlote Rivas, right, engaged with students in a dialogue about racism.

A group of about 40 students and 10 faculty members gathered in the Global Language and Cultural Center in St. John Hall on Tuesday, March 19, to attend the “Racial Issues in Cuba” event, where guest speaker, Miguel Barnet, gave a lecture.

Barnet is a world-renowned Cuban poet, novelist, ethnographer and politician. He was awarded Cuba’s National Prize for Literature in 1994 and continues to be a representative of Cuba and its culture.

Barnet, accompanied by the Vice President of the Union of Writers and Artists in Cuba (UNEAC), Luis Morlote Rivas, read one of his papers out loud to the audience and engaged in a dialogue about the racism that black people experience in Cuba.

The event was hosted by the Center of Latin American and Caribbean Studies in collaboration with the Department of Language and Literatures.

Barnet, author of “The Biography of a Runaway Slave” and president of  UNEAC, gave his own personal analysis of the roots and effects of racial tension in Cuba and also provided several solutions.

He stressed the need for equality in Cuba and highlighted the importance of black people in Cuban society.

“Without blacks, Cuba would not be Cuba,” Barnet said, which garnered multiple murmurs of agreement throughout the room.

When addressing possible solutions to racial tension and discrimination in Cuba, Barnet emphasized that government legislation is not enough to fix the problem.

“We can have a wonderful, beautiful constitution, green, black, yellow, pink — but if racism still exists in the society it’s like paper that can be thrown in a bin,” Barnet said.

He believes that in order to end racism, there must be a constant analysis of the problem, as well as a confrontation of the problem.

He stated that when faced with the problem of racism “we must work hard for the ability for people to live comfortably in society.”

Barnet also emphasized the importance of representation and said that Cuba needs to see more black families on television. He added that it is important for black people tell their own stories about their everyday life.

During the question and answer segment of the event, when asked to recommend more Afro-Cuban poets and authors, Barnet listed writers such as Nancy Morejon and Alberto Guerra.

“Miguel Barnet’s lecture was very insightful,” junior Johnny Wiley said. “It was interesting to hear about the United States’ economic sanctions on Cuba and how they affected both racial and wealth inequality.”