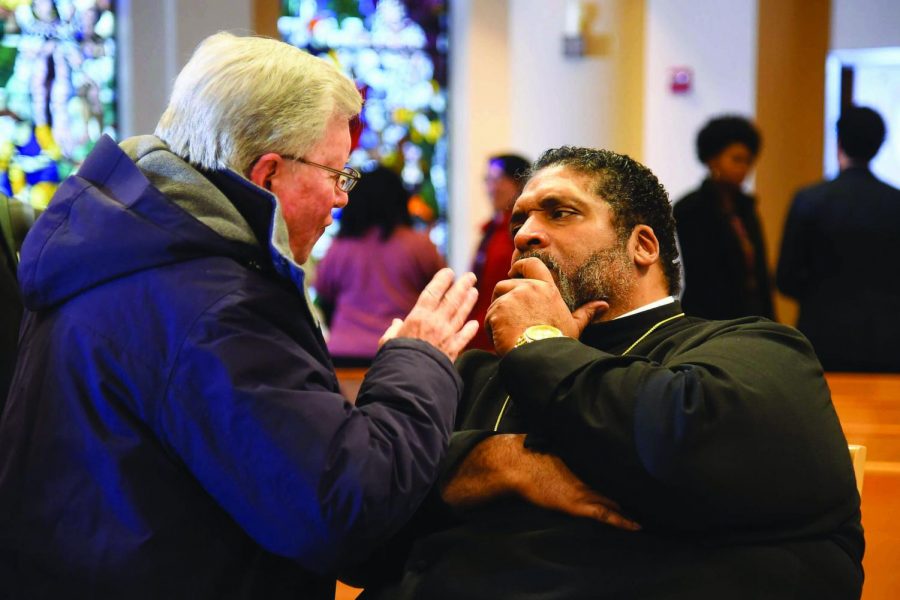 Reverend Barber delivered his third lecture in his series of four on Thursday, March 21.

The son of a World War II Navy veteran and minister in a military community, Barber said America is built on militarism and fighting endless wars. America’s military spending is higher than the next seven countries combined. The problem is this money is spent on the military instead of on social programs that could improve the lives of citizens, Barber stated during his lecture.

Barber mentioned that some say there are enough nuclear weapons in America alone to destroy the world between five and 50 times. Martin Luther King Jr. warned that this violence and militarism will hurt the country, morally.

“A nation that continues year after year to spend more money on military defense than on programs of social uplift is approaching spiritual death,” Barber said quoting King.

King specifically was concerned about the Vietnam War during his life. Before his death, he wrote down 10 commandments of Vietnam, which his wife read three weeks after his death.

Barber spoke about how the Vietnam War was surrounded by lies told by politicians and resulted in unnecessary deaths in support of the government-proclaimed cause. They said their goal was to prevent the spread of communism, but Barber and King believe the war was built on lies.

America still operates under questionable military procedures, including committing illegal acts such as the recent bombs on Syria, Barber said. Because the president can order troops without congressional authorization under the War Powers Resolution only if there is an attack on the United States,   Barber contends that America illegally dropped bombs in April 2018.

Now, Barber said it has been admitted there is no militaristic solution to America’s current conflicts but troops are still sent.

Another problem posed by militarism is the effect it has on minorities. Wars such as Vietnam have disproportionately targeted minorities because these groups typically received lower incomes and were not able to escape the draft by going to college.

Barber’s father was drafted into the Navy while it was still segregated.

“He was asked to go and fight for the world safety against Hitler, and yet to still suffer because of white supremacy in America,” Barber said.

There are two narratives of America: Genocide and enslavement. Genocide began when Europeans settled America, wiped out and dominated the Native Americans and the enslavement of Africans was woven into the fabric of the nation even present in the motivation for parts of the Constitution. The Second Amendment for example, Barber said, was created to provide slaveholders with guns in case of slave revolts, not as a method of other protection.

Barber related militarism to the story of the demon, Legion, who possessed a man and who begged Jesus to put him into a herd of pigs to save himself. The pigs killed themselves and the people of the town told Jesus to leave because they were angry they lost money when the pigs died. Barber pointed out that the people were more concerned about the money than the man’s life, and that this parable relates to the current economy in America.

The crowd listened quietly to his analysis of the American war economy and mostly participated in the interactive worship portion that preceded Barber’s sermon.

Two members of Sinai, the liturgical dance team, performed after his lecture. Barber and the other event leaders then encouraged everyone to participate in the singing of a worship song.

The audience was made up of a large amount of students who attended for class, for their own enjoyment or affiliation with campus organizations. Other members were simply fans of Barber.

“This is a really special outing for us,” Driscoll said. They have been following his speeches for a while and said they were not disappointed with the one he delivered on Thursday.