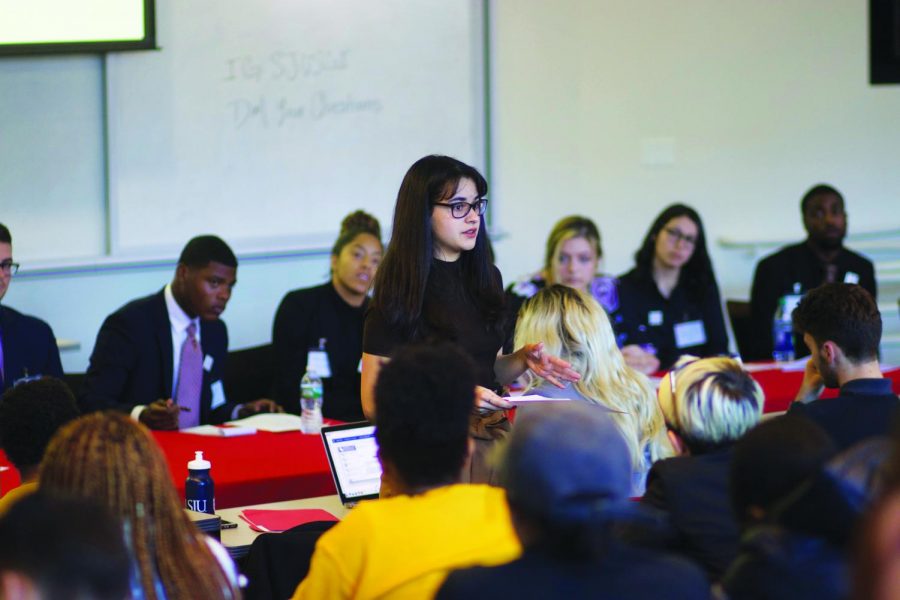 Angelica Acevedo, editor-in-chief of the Torch, moderated the debate along with current SGI president Atem Tazi.

UPDATE: The SGI election results display scheduled for today at 3 p.m. in DAC coffeehouse has been canceled until further notice, according to the current SGI executive board. Story is developing.

It was time for students and the rest of the St. John’s community to hear directly from the 2019-20 SGI Executive Board candidates — The P.R.I.D.E. ticket, the L.I.T. Ticket, and one independent candidate, Christopher Viola for senior senator.

The candidates sat across from current SGI President Atemkeng Tazi and Torch Editor-In-Chief Angélica Acevedo, who moderated the debate with questions from themselves and from the audience through SGI’s Instagram direct messages.

In seven minutes, each ticket and candidate verbalized their views, to either minimal or strong applause afterward. They each covered issues from #SurivingSJU to the SGI website to Senior Week.

Before students cast their votes on Thursday, April 4 and Friday, April 5 — and the results are displayed in the DAC coffeehouse on Friday at 3 p.m. — see some of the most important points of every ticket’s plans for next year’s policies and procedures.

P.R.I.D.E. — Inclusivity for more organizations on campus, accountability through formal resolutions and a committee dedicated to wellness.

HOW THEY WILL HANDLE THE AFTERMATH OF #SURVIVINGSJU

P.R.I.D.E. — Vice President candidate Clyde Drayton says they will be publishing formal resolutions that act as the unanimous stance of SGI, so students feel more supported. They want to form a wellness committee and teach students about conducting mental health first-aid for these situations.

L.I.T. — Secretary candidate Hannah Sesay says more outlets are needed to hear students out before problems. They want to create a clinic where graduate psychology students can act as counselors. “There is not enough manpower in the counseling center to handle all the students,” she said. She also stressed rebuilding the relationship between students and Public Safety.

Viola — Viola wants to focus on removing the stigmas of rape culture on campus. In reference to a transgender student who many marched with in October, he says, “Advocacy is only necessary when there is a problem and removing the problem is the first step.” He wants to reevaluate SJU’s sexual assault and mental health training to make it more inclusive.

P.R.I.D.E. — Secretary candidate Nnaemeka Ifeajekwu says he wants to break the stigma that students can’t come talk to SGI. “We are not above you in any way,” he says. He wants students to come into the office at “any time.”

L.I.T. — Sophomore Senator candidate Austin Bovino says they are forming a system of checks and balances similar to the the U.S. Government. They want to be proactive rather than reactive when people have a problem with SGI.

Viola — If he doesn’t support his promises, Viola asks that students come directly to him. And that in general when they have complaints, “It’s more often that you are going to be heard in numbers.”

P.R.I.D.E. — Ifeajekwu believes the SGI website needs some updating. He said his ticket is pushing an initiative called “Get to know Involvio,” where organization leaders can learn how to use the new online services since StormSync is going out of business.

L.I.T. — Sesay wants to find someone outside of SGI to work directly on the site, reach out to students to find out what they want to see and add an FAQ section. “Most people didn’t even know a website existed,” she said. The problem, she added, was that the coding of the website is difficult.

Viola — While Viola did not comment on the SGI website, he did touch on the issues surrounding the promotion of campus events. He’d like a calendar just for student organizations where they can present their events.

HOW THEY’LL IMPROVE THE BUDGET SYSTEM

P.R.I.D.E. — Since StormSync is going out of business, Treasurer candidate Nia Gumbs says the future executive board will decide whether to just use Involvio or a combination of Involvio and the company that is buying StormSync. She said when that happens, “we will make sure you know the whole process and resources.”

L.I.T. — This ticket is focused on rebuilding; that is, rebuilding the process through Involvio so that students feel like their budget concerns are being heard, and so that people are not being denied the money they request.

HOW THEY’LL REMEDY THE TENSIONS WITH THE LGBTQ+ COMMUNITY

P.R.I.D.E. — Drayton says he wants to bring Spectrum’s SafeZone Training (which is required for Resident Assistants) to SGI, and make sure students have the accessibility when it comes to these trainings.

L.I.T.  — Bovino says that as a member of the community, he sees the difficulties Spectrum has had as an organization, and says that they hope to promote more collaborations with other student orgs in order to be more successful.

Viola — Viola also says he is a member of that community and wants to focus on understanding the specific biases and health risks the community faces — for example, gay men’s health issues, the stigmas on transgender people — because “sexuality has been introduced into our education very recently.”