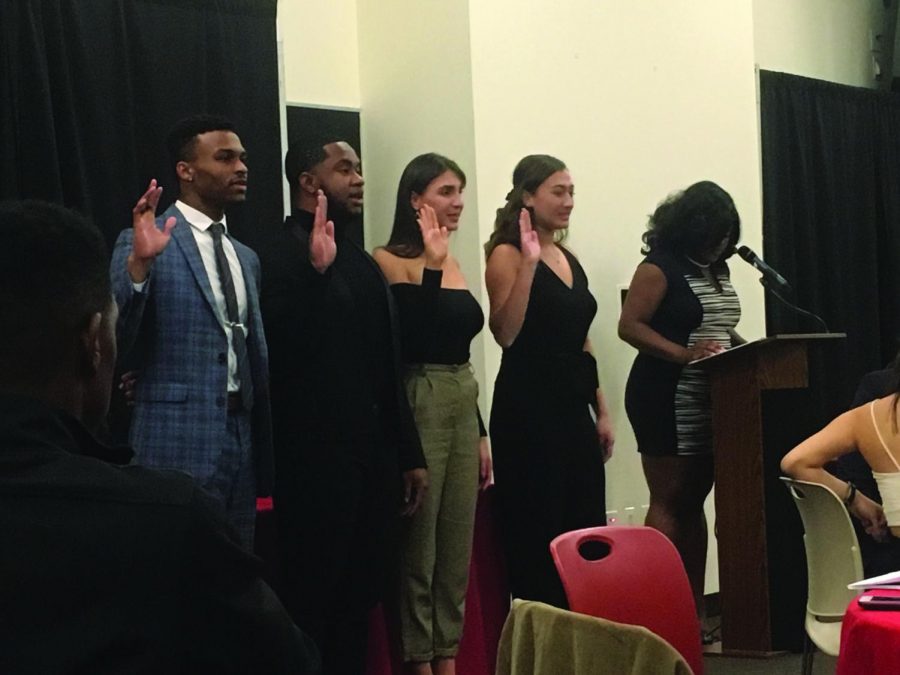 The current members and executive board of Student Government, Inc. gathered in DAC 128 on Monday to inaugurate the newly elected e-board and celebrate the accomplishments of the preceeding year. Hosted by former SGI President Atemkeng Tazi and the rest of the former e-board, the inaugural dinner marked the transition of the highest positions in SGI, as well as the introduction of the new committee chairs.

The night started off with an award presentation that honored the many students and administrators that keep SGI running on a daily basis. Among the honorees were SGI adviser Jack Flynn, Associate Director of Campus Activities Elizabeth Sheehan and Student Life Assistant Miriam Marshall.

SGI has a number of annual awards that highlight the accomplishments of many individuals who participate in SGI, and the winners receive engraved plaques and flowers. The Jerry Ferelli award was given to Melanie Sheehan, the former co-chair of philanthropy. The Forever SJU Alumnus award was awarded to Elizabeth Sheehan, an alumna of St. John’s who continues to contribute to the students at the school. The Jack Flynn Participation award was awarded to none other than Jack Flynn — it has been awarded to him for the past two years as a humorous offering from past e-boards.

Once the main awards were distributed, the current e-board took the opportunity to honor SGI members of each year for their excellence. There is an award for each position: A sophomore senator, junior senator, senior senator, treasurer, secretary, vice president and president. Afterwards, the new executive board was inaugurated.

“I’m really excited to start hopefully implementing as many [ideas] as possible and … getting things organized this summer,” Senior Senator Anna Gibson said.

“Standing outside from 7 a.m. to 7 p.m. was a lot but it was… a good bonding experience for our ticket and it really showed that when push comes to shove, we’re all going to be there for each other and we’re all going to push through.”

Starting with the top seven, minus President Matthew Macatula, Tazi read them the oath as they repeated, promising to serve with “honesty, fairness, enthusiasm and respect.” Afterward, Macatula took the oath on his own and was presented with the gavel. The rest of the chairs for the academic affairs committee, budget committee, elections committee and the other 10 committees took their oaths. This year, the public relations committee has three chairs instead of one chair or two co-chairs.

“At the moment there’s no committee,” Marsean Rice, one of the new co-chairs, said. He was a public relations committee member. “With my current involvement and what I want to do career-wise, I felt like applying for chair was really my best option in terms of really getting that field experience. And what’s better than Student Government Inc.?”

Lastly, the college representatives were inducted. The dinner ended with Macatula addressing the room in a speech about his journey through St. John’s. From starting out in the Physician’s Assistant program, to joining the former St. John’s chapter of the Pi Kappa Phi fraternity, to becoming a resident assistant and changing his major, Macatula outlined his journey to presidency. He also took a moment to address a large reason for his initiatives on wellness — his friend and former roommate Zachary Misleh, who committed suicide in 2017.

“We have big shoes to fill,” Macatula said. “I really had to dig deep … it was a mixed crowd, there are people who voted for us and people who didn’t, so I just wanted to show as best as I could my true character and what I’ve gone through at St. John’s.”

Now that SGI has officially passed the torch, the new e-board will be working during the summer to finalize the details of next year.

“I think there is a ton of potential in each and every one of them and I hope that I can serve them and help them meet their goals,” Flynn said. Flynn and both the new and former e-boards will be meeting in the last weeks of the semester to finish the  transition.