Admin cites Paris motto: ‘She is rocked by the waves, but does not sink’ 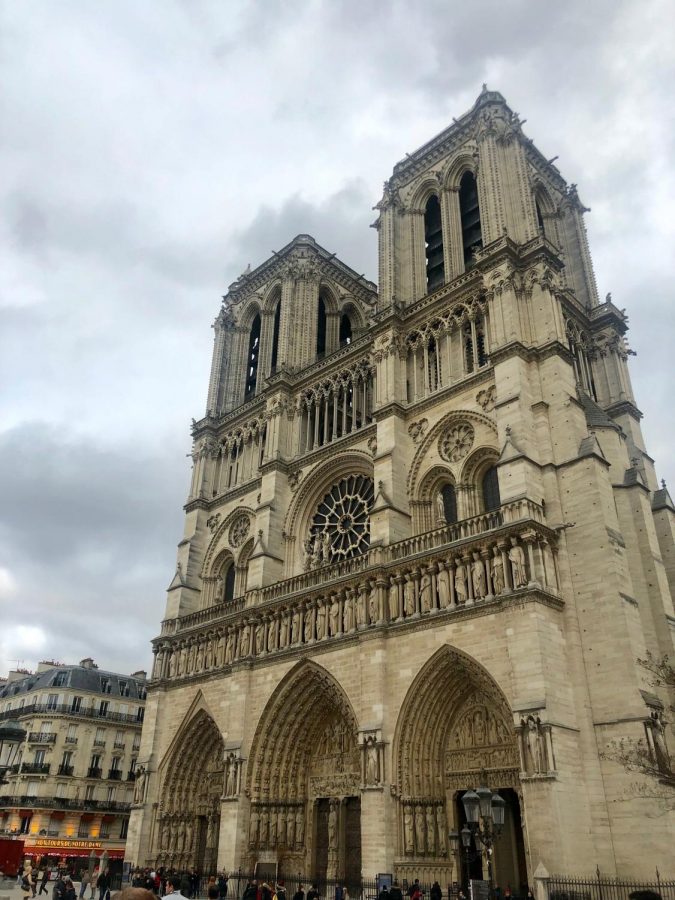 Students who are studying at the St. John’s Paris campus this semester say they were  not harmed during the blaze that set the Notre Dame Cathedral on fire Monday, April 15.

While spring break was in session at all of St. John’s European campuses, only a few students chose to stay in Paris, according to Matthieu Dessier, coordinator of student life.

He said that the Discover France group was on a train returning from a trip in Provence when they heard the news. Upon their return, they were advised to take a metro in order to keep off the streets so that the fire engines and emergency vehicles would have more access to make their way to the city center as requested by the Mayor.

Dessier said the fire in the famous cathedral brought to mind the Paris motto, “fluctuat nec mergitur,” which roughly  translates to, “she is rocked by the waves, but does not sink.”

“It is often brought up by Parisians during trying times, for solace but also as a reminder that the city’s inhabitants are determined to endure and thrive,” Dessier said.

Before the fire went ablaze, visitors of the church were escorted safely upon the first fire alarm, according to news reports. Firefighters, in the middle of fighting the flames, were the only ones that suffered injuries as a result of the fire.

The restoration of the Notre Dame won’t occur overnight, especially after the horrific collapse of the cathedral’s spire. Luckily, plenty of artifacts such as  Jesus’ Crown of Thorns were saved from being damaged.

Many St. John’s students who visited the cathedral during their time abroad were shocked and saddened when they heard the news.

“As someone who considers Paris their second home, I’ve been three times now and going back this summer, Notre Dame is one of my favorite places in the city,” junior Mirtelle Mendoza said. “My roommate and I would sit by the river in front of Notre Dame, there’s a cafe right across that my boyfriend and I used to go to all the time.”

Junior Julia Gilmore recounted her experience of seeing the Notre Dame for the first time, during an organized excursion held for students abroad.

“The excursion was optional but most students went because it was a way to explore a beautiful part of Paris during the beginning of the rotation,” Gilmore said. “I was very in shock about the fire. A church with such prestige, beauty, cultural roots and history seems indestructible until a tragedy like what occurred actually happens.”

In light of the misfortune, Farida Katchadourian, associate director of the St. John’s Paris Association, expresses that the fire serves as a reminder of the impact that the church has had on many Parisians and admirers around the world.

“The tragic fire at Notre Dame Cathedral has been a reminder to appreciate beauty, religion, history and art in the here and now,” she said.

“Many Parisians have proudly asserted that Notre Dame has withstood a great deal in its 800 years, including the French Revolution and two world wars,” she continued. “Yet we should not take it for granted. I expect that students will continue to visit this important pilgrimage site in Paris that is not just an architectural feat but a living Catholic community and the spiritual heart of the city.”

The cause of the fire remains unknown.

According to news reports, about $1 billion was raised within days of the fire to help the restoration efforts. However, this is not without controversy, as many are questioning whether the money could better serve the needs of the poor.

“Was it their faith that convicted them and called the donors to support? Was it culture? The fact that so much money could be raised in so little time and that same money could have been used to solve inhumane world problems is concerning and controversial,” senior Alexia Garïne said. “My heart sympathizes with those who felt the fire personally, but my heart for humanity hurts more.”

“I think a number of people, including within the Vincentian family –– but I obviously don’t speak for them –– are delighted by the outpouring of support for Notre Dame but would also like to see a similar form of solidarity when it comes to helping the poor,” he said.

Although Dessier mentions that while future students who attend the Paris campus may not be able to experience a visit to Notre Dame or mass with the campus ministry leader, Sister Judith, the situation is only temporary while the cathedral is being restored. Meanwhile, the St. John’s footprint in Paris will continue to prosper as  April 30 marks the 10th anniversary for its campus there.

Alumni have participated in the celebration through social media by posting photos and memories of their time abroad using the hashtags #sjuparis and #sjuglobal.

“I have already heard from many alumni as a result of our outreach,” Katchadourian said. “It has been amazing to reconnect with so many people who have passed through these doors. I can’t wait to see what the next 10 years bring.”