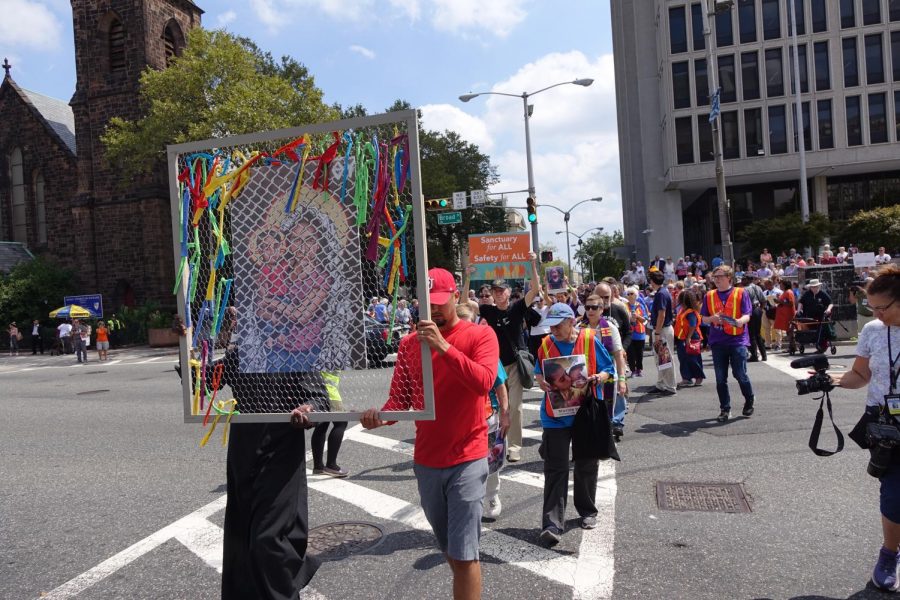 Employees and students involved with St. John’s Campus Ministry traveled to Newark Sep. 4 to engage in a public demonstration — the Nonviolent Catholic Action for Immigrant children to call for the end of the detention of children and families.”

Over 400 participants, consisting of priests, nuns, activists, students and others were all organized to stand in a civil disobedience, or non-violent protest in front of the U.S. Immigration and Customs Enforcement office of Newark’s Federal Building. Joined by campus ministers, students and faculty from SJU, they came together to pray, march and protest as they filled the street, blocked traffic and laid in cross formation.

A few of St. John’s campus ministers within the department were notified of the event through justice collaborators, grassroots organizers, religious communities and social media. They decided that it was an important opportunity for students to speak up on political injustice and act along with groups alike.

“While all people should be concerned with unjust treatment towards migrants seeking safety and security, Catholics should particularly connect with the spiritual aspect of migration as part of their faith tradition,” said Victoria O’Keefe, residence campus minister for social justice, who attended the protest.

The nonviolent campaign was open to people around the country to join and was hosted by approximately 13 community, nonprofit and religious organizations. It was led by Cardinal Joseph Tobin of Newark, an American Cardinal prelate and Archbishop of Newark, New Jersey.

“Images of immigrant children detained in cages, separated from family members, and living in unsanitary, unhealthy conditions have outraged the nation in recent weeks,” Cardinal Tobin shared with those taking part in the action. “The faith community has decried this treatment of children not only as a violation of human dignity and rights, but also as contrary to religious teachings and the sacred call to care for all people, especially those who are most at risk such as children.”

As many protesters were willing to be arrested, the Newark police only issued summonses to six people, according to HuffPost. This event was following a Catholic-led protest held in Washington D.C. in July where seventy people were arrested. This marked the beginning of the campaign against child detention and family separation.

Earlier this summer in July, Trump confirmed that many undocumented immigrants will be targeted by ICE in raids. As a result of this, 35 people were arrested, according to The New York Times.

This recent action was guided by the 25th Chapter of the Gospel, Matthew, which claims to encourage the act of welcoming strangers, feeding the hungry and caring for the sick. To some, the acts of Trump presents are contrary to this parable.

“The Holy Family sought refuge and there are countless calls and examples of welcoming the stranger in scripture,” O’Keefe said. “This mandate of welcome is also reinforced by our Vincentian Charism which aims to serve the poor and marginalized at all times.”

Demonstrators chanted, “Stop the Inhumanity!” as was read on their signs.

Also in attendance was Jeremy Cruz, assistant professor of theological ethics (pictured on the front page in a St. John’s cap). He was contacted by the event’s organizer, Eli McCarthy, a theology instructor at Georgetown and director of peace and justice for the Conference of Major Superiors of Men.

“I was there to learn how our undergraduate minor, Social Justice: Theory and Practice in the Vincentian Tradition, can better collaborate with national Catholic organizations doing human rights and peace building work,” Cruz shared as he teaches the capstone seminar for the minor.

Cruz attended the event and completed the civil disobedience training. However, he was given a different role in the action.

“I helped carry the icon titled “Mother of God: Protectress of the Oppressed,” which led the procession from the church to the action site and led those risking arrest into the street when it was time for them to occupy space in the street,” Cruz said.

As stated in a press release from McCarthy,“with other coalition actions, this nonviolent action [in Washingnton, D.C.] assisted in the release of over 2,500 children, emptying both Homestead, Florida and [Carrizzo] Springs, Texas influx facilities.”