State of the University Address 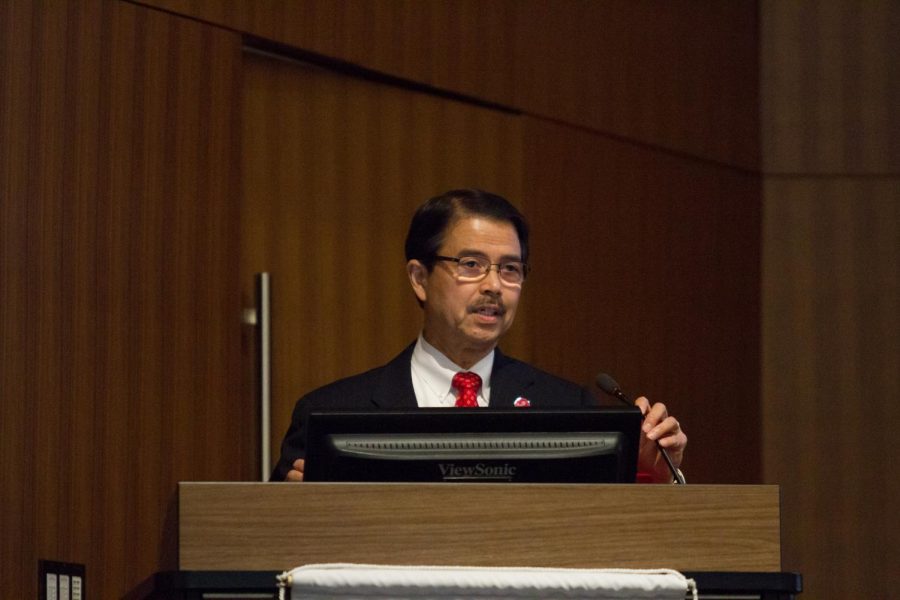 Students, faculty and alumni filed into Marillac Auditorium Wednesday afternoon to listen to St. John’s President Conrado “Bobby” Gempesaw’s State of the University address, a tradition that was started by Gempesaw which has gone on for five consecutive years. The address by President Gempesaw, which was also streamed online and at St. John’s satellite campuses around the world, touched on a variety of topics including the university’s plans in the future.

Prior to President Gempesaw’s address, Student Government Inc. Matthew Macatula gave a brief introduction in which he told a story about how Gempesaw had gone to a Philippine-Americans Reaching Everyone (PARE) meeting and had grown so close with everyone there that they referred to him as “Tito Bobby,” which means Uncle Bobby in Tagalog.

Macatula concluded by saying Gempesaw “is always there for us and continues to advocate for the betterment of our students.” Gempesaw began his address by saying, “while we continue to face many challenges, I can say with confidence that St. John’s is a much stronger university than it was five years ago.”

One of the first things Gempesaw discussed was the current enrollment trends at St. John’s and how those compare to past trends at the university. According to the University, this year’s incoming class is expected to be 3,110 students, which has been on par compared to previous years.

For the incoming class, the average SAT score was 1202, which he said is the highest it has been in recent years. The incoming class, according to Gempesaw, features nine valedictorians, nine saludatorians, 55 Ozanam scholars and more than 450 students in the honors program.

According to Gempesaw, the University’s retention rate is higher than the national average of private colleges and universities, which he said hovers at about 80.4 percent. Although this year’s 82 percent retention rate was only a slight decrease from the class of 2017, which was 83.9 percent, Gempesaw said he was not satisfied.

“This was a class that had one of the better academic profiles we have enrolled in many years and was actually predicted to achieve at least an 85 percent retention rate after one year,” Gempesaw said. “Because of the improvement in the academic profile of our entering class, many of the students that decided to leave after one year were students who did well in their classes and transferred to other schools for various reasons. But one important reason they cited was the opportunity for enhanced experiential learning offered at the new school they transferred to.”

Gempesaw continued saying, “We must recognize that one of the primary reasons why a student transfers is the lack of connection or engagement with an institution.”

Rev. Bernard Tracey C.M., the Executive Vice President for mission at St. John’s, also spoke during the State of the University.

A PowerPoint slide that was on display when he spoke cited a national study from the fall of 2018 that found that 56 percent of college students were housing insecure and another 17 percent were homeless.

In another study, also taken in the fall of 2018, 55 percent of CUNY undergraduate students were housing insecure, and 14 percent were homeless.

With these shocking numbers as the backdrop, Tracey highlighted some of the ways in which the University plans on combating this national housing crisis.

One way the University plans on doing so is with a partnership with the Dax Program sponsored by DePaul USA, a subsidiary group of DePaul International since 2008. The program provides housing, food, transportation and other types of support to homeless and housing insecure college students who are eligible. Those students who qualify will pay a minimum of $150 for rent each month and must work a minimum of 10 hours a week. The program also ensures a transition into life after college, as students that graduate receive a three-month extension in the program prior to graduating.

Over the course of the summer and into the school year, many renovations were made to St. John’s. In President Gempesaw’s speech, he listed the new projects around campus. One major renovation was to Marillac Hall, where the first and second floors were completely remodeled and a handicap entrance was added to the Marillac Auditorium.

“I was given a tour of the renovated classrooms a few weeks ago,” Gempesaw said. “My only regret is that we could not renovate the whole building at once.”

The reason why only the first and second floors were renovated was due to budget constraints, according to Gempesaw. However, Gempesaw did say that they hope to continue renovations next year.

A major announcement at the president’s address was the announcement of an eight-figure gift that was set to be officially announced later that evening at a reception in Midtown Manhattan. The gift ended up totaling $10 million and was the second largest cash gift in the past two years. Along with the gift also came the announcement that the College of Professional Studies would now be named the Lesley H. and William L. Collins College of Professional Studies following their donation.