Take Back the Night March Breaks the Silence 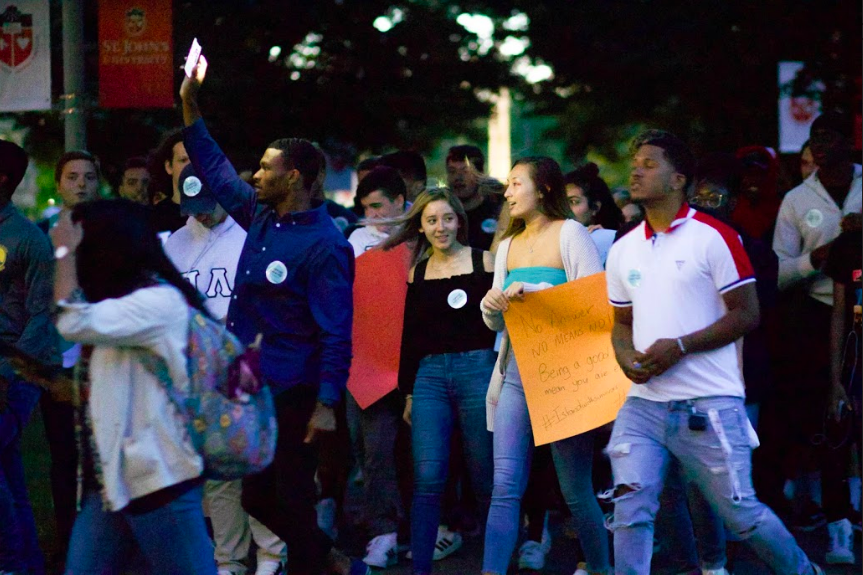 This year’s annual Take Back the Night started in front of Donovan Hall and ended in DAC living room. A protest-turned-showcase, the evening of solidarity went as planned with over 100 in attendance on Tuesday Sep. 24.

The event was hosted by the Sexual violence Outreach, Awareness, and Response Office (SOAR), and featured appearances from Step Ya Game Up and the Mixed Chorus. Multiple organizations marched to show their support for survivors of sexual assault and promote awareness for support services on campus and throughout the borough. Student Government, Inc., EDEN, Delta Phi Epsilon, Lambda Pi Chi and other student organizations made signs and chanted along with leaders from SOAR until they made it across campus at about 7:30 pm. 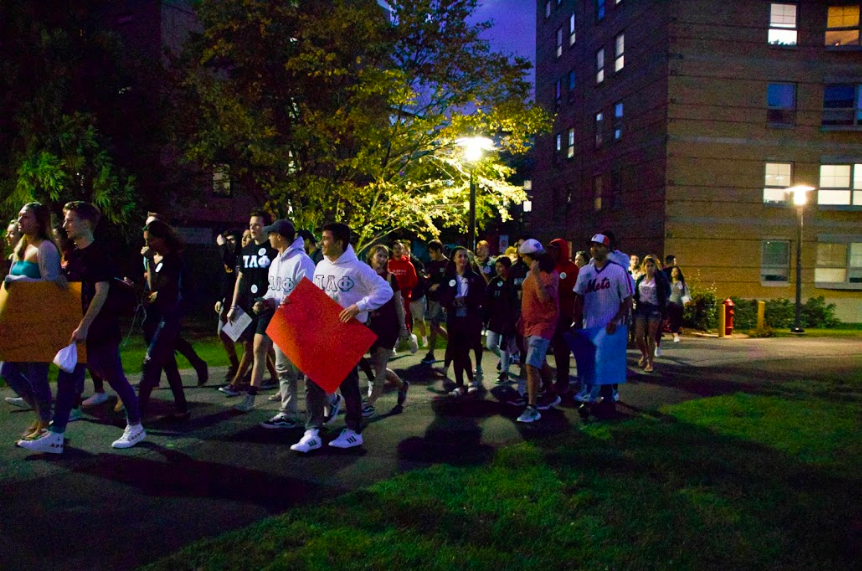 The SOAR office hosts the event every year, but this is one of the first times they’ve done it before Sexual Assault Awareness Month, which is October. “We thought it was important to raise awareness about the issue as soon as possible while we’re still in the ‘red zone.’ The ‘red zone’ refers to the first six weeks of college in which more than 50 percent of sexual assaults occur on and around college campuses,” said senior Isabella Forero, who has worked with SOAR since Spring 2019 as a peer educator. “I would have liked to have seen more men in the audience. Men are disproportionately the perpetrators of these crimes, and events like these are great opportunities for the morally educated men of St. John’s to learn more about how they can use their unique positions in our community for change,” she said.

While not all of the marchers got to swipe in, attendees say there were well over 100 students there. SGI Vice President Clyde Drayton and engaged the crowd in chanting “survivors unite, take back the night,” followed by SYGU, student performers and a message from SJU’s Title IX Coordinator Jackie Lochrie. The crowd gave enthusiastic responses as SYGU’s captain, senior Vanessa Perryman, shouted “No more violence, it’s time to speak up” and cheered once again when Mixed Chorus performed their rendition of “You Will be Found” from the Tony Award-winning Broadway show Dear Evan Hansen.

Emily Shue, a volunteer for the WomanKind center in Queens, held the microphone for a few minutes to make students aware of their partnership with SJU and all the services they have to officer for survivors of sexual violence — services offered in not only English, but also Vietnamese, Chinese, Korean, Hindi, Urdu, Spanish, Tagalog and more. Shue teaches classes that involve using art for healing and processing trauma, and gave the crowd the WomanKind 24/7 helpline.

The crowd spilled into all corners of DAC living room, with a few standing on the staircase just across from a stage built in front of the fireplace, and others looking on from their seats in Starbucks.

Stanlia Perry, chaplain at faith-based student organization EDEN, says she hasn’t personally had an experience with the counseling or health services on campus but she’s heard that it helps some and doesn’t help others. “I think we just have to be more aware of our resources and speak up … and we have to really press the university to make sure these things get investigated properly and not swept under the rug,” she said. She and her other executive board members marched in solidarity with others, in place of their usual Tuesday night bible study.

Students left with flyers from WomanKind and SOAR, little sand jars from an activity in the back of the room, as well as the signs they had made and marched with. “It’s gratifying to see people showing up and really working to combat sexual violence in ways that go beyond just claiming the cause on social media, though these methods can still make change,” Forero says.