‘I Am Back' Sanders announces at his rally in Queens 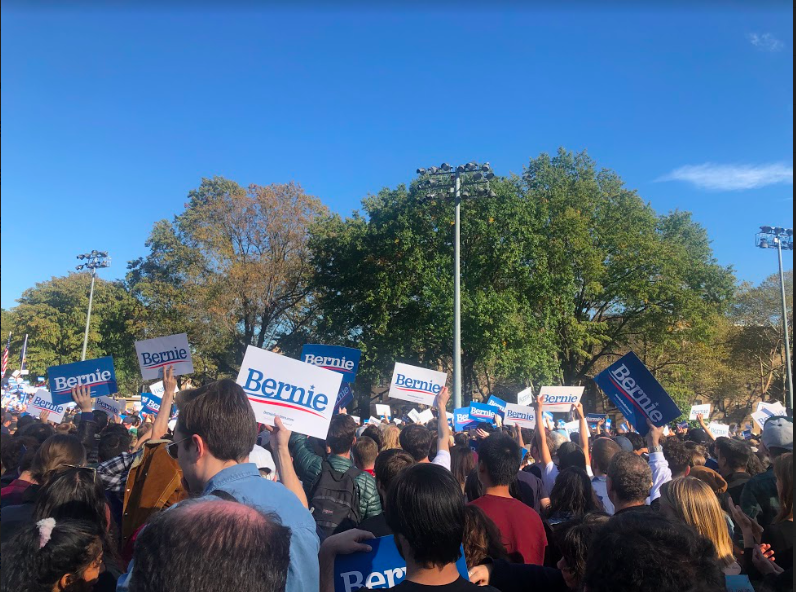 Presidential candidate Bernie Sanders hosted a rally on Saturday, Oct. 19 at Queensbridge Park, his first since his heart attack earlier in the month. In front of an audience of more than 25,000, Sanders discussed his view for the future of America, and the changes he would make if elected President of the United States.

Queensbridge Park was chosen for a multitude of reasons. For one, it is located right on the edge of Queens and Manhattan, so rally attendees could look to the left of them and see the high-rise skyscrapers of the city. Meanwhile, on the audience’s right was the largest public housing project in the United States, Queensbridge Housing, and directly behind Sanders was the largest fossil fuel plant in New York City. This was no mistake, as Sanders stated that this was contrast represented how the impoverished were viewed, and that there needed to be an end to “environmental discrimination.”

The energy was electric when AOC stepped on the stage, who recently endorsed Sanders, and was clearly loved by the audience. As the youngest woman ever elected to Congress, AOC shared her story of how she was raised in the Bronx in a one-bedroom home, became a waitress in downtown Manhattan and is now a U.S. Representative. She states that the reason she felt the motivation to run for Congress, and had hope she could be elected, was because of Bernie Sanders — because he stood for people like her, who had struggled to make a living wage. Following her speech, AOC introduced Sanders, who was greeted with lengthy cheers.

Sanders discussed many issues during his rally, including economic inequality, insurance and childcare costs, housing issues, discrimination, student debt, gun regulation and global warming. Regarding the economy, he said that the top one percent has more wealth than they ever have, and that under his administration, they would have to pay their share of taxes. To those people he stated, “You ain’t gonna get it anymore.”

The crowd was filled with diverse individuals on all socio-economic levels. St. John’s students were present at the rally as well, and were enthralled by Sanders and the rest of the speakers. Freshman Andrea Vizzuett-Garcia, who is a supporter of Sanders and admirer of AOC, shared that her favorite part of the rally was “being able to surround myself around people who share the same values in solidarity and support a candidate that she loves. It’s a great feeling.”

Sanders’ rally can truly be summarized in the statement he shared that got the crowd ecstatic: “To put it bluntly, I am back.”