“Making Strides of Queens” began at 10 a.m. it was recorded by the Society to have had around 20,000 attendees, and with this fundraiser, the society has raised over $420,000 during this year, as of Sunday. 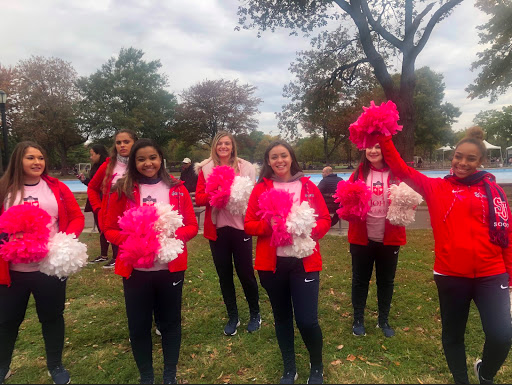 Multiple organizations, companies and individual teams were present at the event, including St. John’s, which had their own tent to help raise money and awareness for the Society. The University, attempting to increase attendance to the event, provided breakfast and pink St. John’s t-shirts to students and ran a shuttle bus to and from the event. At the park, the SJU Cheer and Dance Team performed to the school Band, and mascot Johnny Thunderbird was there to encourage the walkers. SJU also participated in collecting donations and the school raised a little over $4,800 by Sunday night.

Freshman Kayla Fittipaldi was one of the many SJU students who attended.

“The event was amazing, despite the cloudy weather. Everyone was smiling and having a great time,” she said. The best part to her was “the community energy and diversity,” as people from all different ethnicities, ages, and genders attended the walk.

“It was worth going to because we were supporting a worthy cause and bringing the community together while doing it,” Fittibaldi said.

Multiple new activities were added this year, including the food trucks, titled “Food Truck Row” and Reflection Row, which was available for attendees to purchase a ping flag in dedication to someone who has survived or been affected by Breast Cancer. During the last mile of the walk, the flags were planted in the ground, giving a visual representation of those that were walking.

Registration for the event began at 8 a.m., but the official start of the walk wasn’t until 10 a.m. The walk was just a lap, three miles long traversing the walkers through the large park in Corona, Queens.

Before the walk began, there were multiple booths and food trucks available, all of which were encouraging donations to the event. There was a special area specifically for breast cancer survivors, where they received special recognition and participated in activities.

The American Cancer Society made it clear that every small donation helps. While the event did not require money in order to participate, it was encouraged that each participant donate at least $10-$20. However, it was not required. Also, even though Breast Cancer Awareness Month is only in October, they mentioned in emails that they collected donations “365 days a year.”

To find out more about the event, visit their Facebook page @MakingStridesQueens. For more events taking place this year, visit https://www.cancer.org.