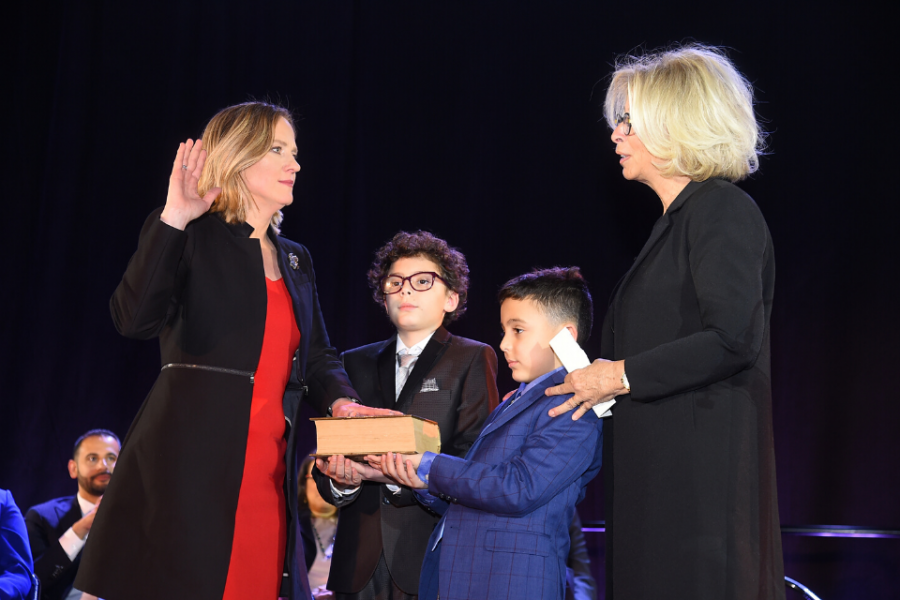 Melinda Katz, the first female district attorney of Queens, held her inauguration amongst city and state officials, religious leaders and hundreds of attendees at her alma mater, St. John’s in Carnesecca Arena on Jan. 6.

“The inauguration was held at St. John’s University so I could ascend to the District Attorney’s Office in the same arena where I received my juris doctorate,” Katz said in a statement to the Torch. “I am very proud to be an alumna and it meant so much to me to share this event with the 1,000 people that joined us.”

Throughout the inauguration, Katz broke down her priorities as district attorney, which included plenty of progressive policy changes and she was also introduced to the nine members of her executive team led by 26-year veteran of the Queens DA’s office, Chief Assistant Jennifer L. Naiburg.

Katz joined many officials such as Rep. Greg Meeks, Lt. Gov. Kathy Hochul, Attorney General Tish James and Mayor Bill de Blasio, who all gave remarks acknowledging Katz’s accomplishments and position that serves as a crucial moment for criminal justice reform, according to the Queens Courier.

Elected officials praised Katz on her creation of the borough’s first Conviction Integrity Unit, which will examine cases and make recommendations for exoneration. According to Katz’s platform website, she stressed the issue of wrongful convictions and that it’s the district attorney’s job to ensure that justice is done.

Katz put the policy into effect on day one of her tenure. She also put into effect the abandonment of the 180.80 waiver policy, which is a reform that allows defendants to plead a case before a grand jury five days after an indictment.

They also highlighted  her promise to protect immigration rights and keep ICE agents away from courthouses and limit hate crimes. Many acknowledged her history of public service as borough president, City Council member and assemblymember that has evidently prepared her for office.

Despite the support Katz received within the audience, a dozen activists from Court Watch NYC, a collaborative project focused on accountability in courtrooms, and Our Progressive Future, an organization that supports activist youths in their communities, showed up to protest against Katz and her failure to pursue her goal of ending cash bail during her first day in office.

Katz responded to critics by admitting the error and remaining committed to ending cash bail in all forms.

“There’s a lot of naysayers and critics. There are those who say we’re not going far enough, there are those who are going too far,” said Katz. “I look forward to that challenge with the trust to do the right thing even though we know we can’t achieve it all in that single day.”