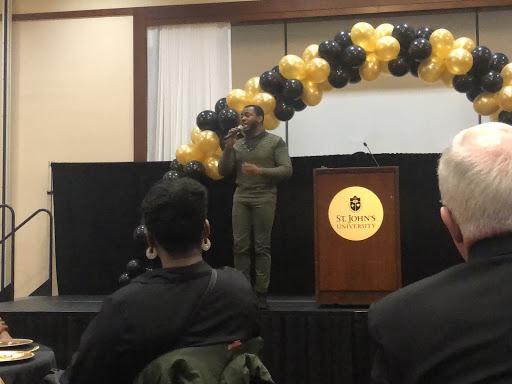 In honor of Martin Luther King Jr. Day, the Office of Multicultural Affairs held a Legacy Dinner,  in his name on Monday, Jan. 27, an event that has been held for nearly three decades. Keynote speaker Rev. Dr. Jamie Washington discussed the importance of recognition of the work of others towards equality, the need to continually push for more equality and his “dream for humanity.”

The dinner began with a welcome by Monique Jernigan, the executive director of Multicultural Affairs. She stressed the importance of the event and expressed her appreciation for those who helped create the event, saying, “I want to also thank… all the student organizations who have been a part of making Black History Month, and especially tonight, possible.”

After Jernigan’s introduction, senior Emem F. Essiem led the attendants in singing the first stanza of the Black National Anthem, which was then followed with a prayer by Rev. John J. Holliday, C.M., the University Chaplain. Afterwards, the attendants were invited to enjoy a catered meal

Step Ya Game Up, SJU’s step team, performed after dinner, receiving a roaring round of applause. After this, Jernigan introduced Washington who walked onto the stage singing “If I can Help Somebody,” which is what Mahalia Jackson sung at the funeral of Martin Luther King Jr. He thanked those in attendance, while also posing the question about why they were really there. “Is it about being seen at the event, or it is really about the legacy?” he asked. To ensure those in attendance engaged in the event, he had everyone stand and meet three people. To Washington, “there is too much that needs to be done in our communities for us to just show up at these things … for you to leave here and not have met anyone … would be a disgrace and dishonoring of his memory.”

The focus of Washington’s speech was on the importance of King’s message in today’s society, and how there is work to be built on. “The work did not start with me,” he said, “and it won’t end with me, so it is critical that we acknowledge the shoulders that we stand on.” The need for progression resonated throughout his speech, not only in racial equality but in all forms, quoting King in saying, “injustice anywhere is a threat to justice everywhere.”

Washington’s closing remarks were encouraging involvement, stating “a wishbone will never suffice where a backbone is required.”

Washington was met with a standing ovation. He was followed by a gospel performance by doctoral candidate Remy A. Martin, who sang “I Love the Lord” by Whitney Houston.

Freshman Kate Larman and senior Abiola Agiwa were among the many students at the event, and both shared their enjoyment of the event.

To Larman, the best part of the dinner was the Washington’s speech, saying she liked his emphasis on, “how we as individuals can consistently continue the fight against all types of discrimination.”

Agiwa shared similar feelings. “The Reverend really touched on how important it is to not forget the work that has been done before us.”She expressed her enjoyment of his message on how to “continue to push forward for a vision of a more equitable future and a future that is better for our children and is better for the people that are to come.”

This event preludes the beginning of Black History Month this February, the theme of which is, “Blackish: Not Your Average Narrative.” Events during the month of February include “Red Table Talk” on Thursday, Feb. 6, held by the Office of Multicultural Affairs, which Jernigan stated will be a discussion into “what it means to be black,” and the 30th annual Black and White Ball, held by Haraya, the Pan-African Students Coalition of St. John’s University, which will be on Saturday, Feb. 29.